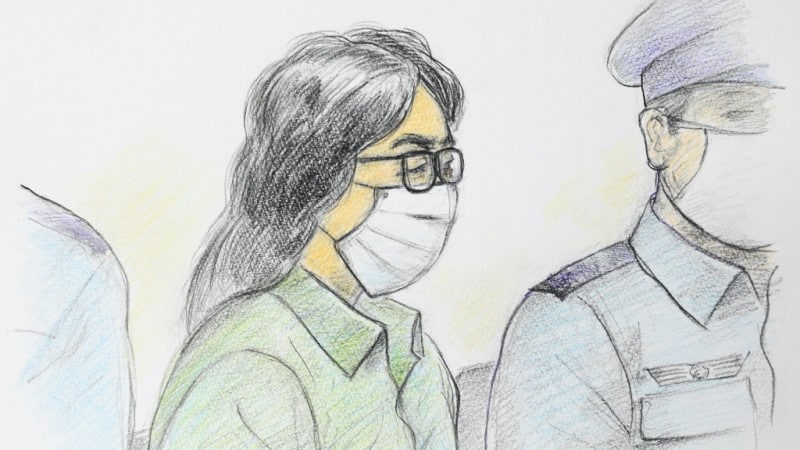 Takahiro Shiraishi (C), depicted here in a court sketch drawing by Masato Yamashita dated September 30, 2020, has been sentenced to death

A Japanese man dubbed the “Twitter killer” was sentenced to death by a Tokyo court on Tuesday for murdering and dismembering nine people he met on the social media platform.

Takahiro Shiraishi, 30, admitted killing and butchering his young victims, all but one of whom were women.

Shiraishi targeted social media users who posted about taking their own lives, telling them he could help them in their plans — or even die alongside them.

His lawyers had argued he should receive a prison sentence rather than be executed because his victims, aged between 15 and 26, had expressed suicidal thoughts on social media and so had consented to die.

But a judge dismissed that argument and handed down the death penalty over the 2017 crimes, which he called “cunning and cruel,” public broadcaster NHK said.

“None of the nine victims consented to be killed, including silent consent,” NHK quoted the judge as saying.

“It is extremely grave that the lives of nine young people were taken away. The dignity of the victims was trampled upon,” he said, adding that Shiraishi had preyed upon people who were “mentally fragile”.

The judge said the case, which prompted calls for tighter control on social networks, “provoked great anxiety in society, because social networks are so commonly used.”

The grisly murders attracted international attention, and the case has been followed closely in Japan, with 435 people reportedly turning up to secure one of 16 available public seats.

When asked if the verdict was audible, Shiraishi, wearing a white mask, stood still and only said: “I understood.”

Family members of the victims have spoken emotionally of their continued pain over the case, with the brother of a 25-year-old woman killed by Shiraishi saying his “heart died” when he heard the murderer’s testimony.

“It didn’t sound at all like he regretted it… It felt like I was being hurt with a sharp knife over and over again.”

On Tuesday, the father of another 17-year-old victim told NHK the death sentence was “appropriate”.

“I feel like I want to get revenge, but bereaved families can’t do anything. I don’t know how to vent my anger,” he said.

Ready to Admit my Guilt

Shiraishi was detained three years ago by police investigating the disappearance of a 23-year-old woman who had reportedly tweeted about wanting to kill herself.

After she went missing, her brother gained access to her Twitter account, and noticed a suspicious handle, eventually leading them to Shiraishi’s residence, where they uncovered a house of horrors on the morning of Halloween in 2017.

Nine dismembered bodies — with as many as 240 bone parts stashed in coolers and toolboxes — had been sprinkled with cat litter in a bid to hide the evidence.

Shiraishi has admitted the crimes, telling the court last month: “I’m ready to admit my guilt and incur the punishment without appealing to a high court.”

It was not immediately clear if he would stick with the decision to forgo an appeal of the sentence.

Japan is one of the few developed nations to retain the death penalty, with more than 100 inmates on death row, and support for it remains high.

But years usually pass between sentencing and execution, with the last in December 2019, when a Chinese man was hanged for the murder of a family of four.

Shiraishi’s crimes reignited debate in Japan about suicide and help for those considering it.

Japan has the highest suicide rate among the Group of Seven industrialised nations, with more than 20,000 people taking their lives annually.

Numbers have fallen since a peak in 2003, but there have been signs that suicide rates are rising again in the wake of the coronavirus pandemic.