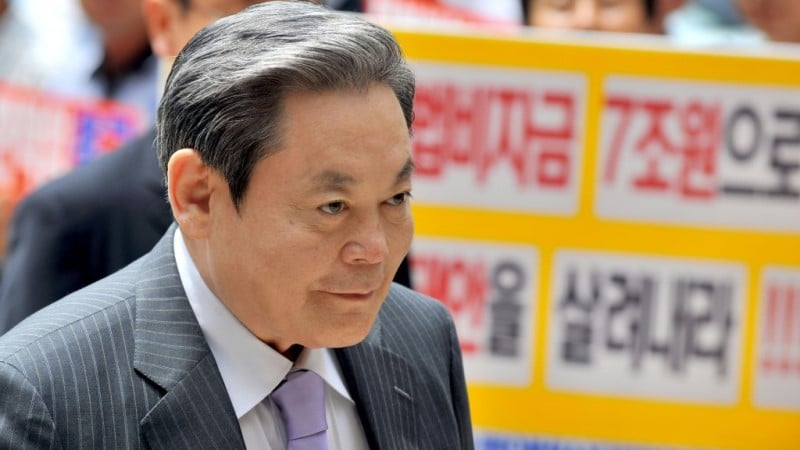 The heirs to South Korea’s Samsung group announced their plans to pay more than $10 billion in death duties Wednesday — one of the world’s biggest-ever inheritance tax settlements — and donate an art trove including works by Monet and Picasso.

Lee Kun-hee, the late Samsung Electronics chairman, was the country’s richest man when he died last October at age 78 after being hospitalized for years, leaving an estimated 22 trillion won ($19.6 billion) in assets.

South Korea has stringent inheritance tax laws and high rates, resulting in a hefty bill for the family, including Samsung Electronics vice chairman Lee Jae-yong, who is currently in jail for bribery, embezzlement and other offenses.

Lee’s family “expects to pay more than 12 trillion won in taxes related to inheritance, which is more than half of the value of the late Chairman’s total estate,” Samsung said in a statement.

“The inheritance tax payment is one of the largest ever in Korea and globally,” it added, saying the Lee family will pay it off in six installments starting this month.

The assets include shareholdings in Samsung Electronics, Samsung Life and Samsung C&T, as well as real estate, according to the statement.

The late chairman also left a trove of antiques and artworks reportedly worth 2 to 3 trillion won.

Around 23,000 pieces from Lee’s collection will be donated, Samsung said, including 14 items classed as National Treasures that will be showcased at the National Museum of Korea.

Works by Western artists including a Claude Monet water lilies painting, Salvador Dali’s Family of Marsupial Centaurs, and pieces by Pablo Picasso, Paul Gauguin, Joan Miro and others will be donated to the National Museum of Modern and Contemporary Art, it added.

“Samsung has carried out a realistic calculation on donating the late Lee’s artworks,” said Kim Dae-jong, professor of business at Sejong University in Seoul.

“If they had not decided to donate them but instead opted for the children to inherit them, it would have been subject to high inheritance tax. With their donation of such high value works, they don’t have to pay that tax while doing general public service at the same time.”

Another 1 trillion won will be donated to health causes, half of it to be spent on building South Korea’s first specialist infectious diseases hospital.

Samsung — whose flagship subsidiary is among the world’s biggest smartphone and computer chip makers — is by far the largest of the family-controlled empires known as chaebols that dominate business in South Korea, the world’s 12th-largest economy.

The conglomerate is crucial to the country’s economic health — its overall turnover is equivalent to a fifth of the national gross domestic product.

The late chairman’s eldest son and the group’s de facto leader, Lee Jae-yong, was jailed in January over a sprawling corruption scandal that brought down former president Park Geun-hye.

He is undergoing a separate trial over stock manipulation, which critics say was key to ensuring a smooth succession of power within the conglomerate.

Commentators online called for him to be freed Wednesday, with one posting on Naver, the South’s largest portal: “Samsung is doing this much for the public, please release Lee Jae-yong now.”

Earlier this week five major South Korean business groups appealed to the presidential Blue House for a pardon for him on national economic grounds.

But an official told reporters that it had “not considered a pardon for him so far and also have no plan, for now, to do so”.

Lee apologised last May for some governance issues at the group, pledging to ensure “there will be no more controversy over the succession” and that he would not allow his children to take over from him at the firm.