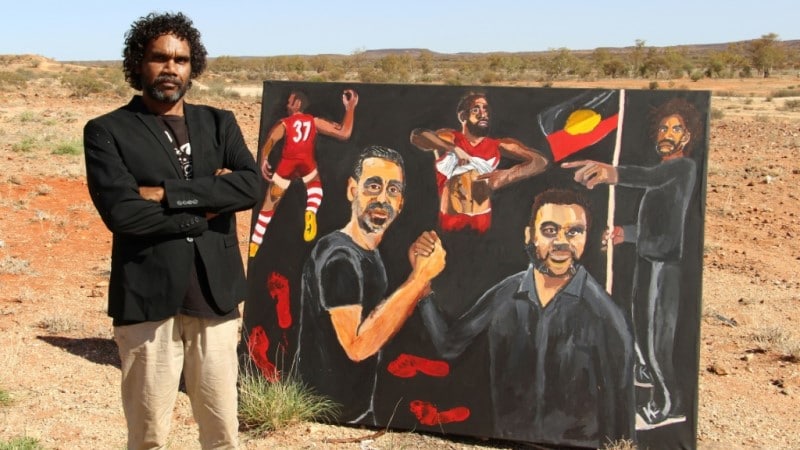 An Aboriginal painter won Australia’s most renowned arts prize for the first time in its 99-year history Friday for a portrait of indigenous footballer and activist Adam Goodes.

Vincent Namatjira took the Au$100,000 ($70,000) Archibald Prize for the painting “Stand strong for who you are”, which features Goodes clasping hands with the artist.

“I’m so proud to be the winner of the Archibald Prize, and to be the first Aboriginal artist to win is really special,” Namatjira said during the award ceremony via video link from his home in the Anangu Pitjantjatjara Yankunytjatjara Lands in South Australia.

Namatjira, 37, said he’d been inspired to paint the portrait after watching a 2019 documentary, “The Final Quarter”, which recounts the last years of Goodes’ career as an Australian Rules footballer and the controversy which swirled after he spoke out against racism in the sport.

Winner: Archibald Prize 2020 Vincent Namatjira Title Stand strong for who you are Medium acrylic on linen Dimensions 152 x 198 cm Further information Vincent Namatjira describes his portrait subject, Adam Goodes, as ‘a proud Aboriginal man who stands strong for his people’. He says: ‘I first met Adam in 2018, when he visited the school in Indulkana where I live, as part of his work promoting Indigenous literacy. When I saw the documentary The final quarter about Adam’s final season of AFL, my guts were churning as I relived Adam’s experiences of relentless racism on and off the field. Memories of my own experiences were stirred up and I wanted to reach out and reconnect with Adam. ‘We share some similar stories and experiences – of disconnection from culture, language and Country, and the constant pressures of being an Aboriginal man in this country. We’ve also both got young daughters and don’t want them to have to go through those same experiences. ‘When I was younger and growing up in the foster system in Perth, Indigenous footballers were like heroes to me. Goodesy is much more than a great footballer though, he took a strong stand against racism and said, “enough is enough”. I stand strong with you too, brother.’ Namatjira has painted himself alongside Goodes in this portrait. It is the fourth time in the Archibald Prize for the Western Arrernte artist, who was born in Mparntwe (Alice Springs) in 1983.

“When I saw the documentary … my guts were churning as I relived Adam’s experiences of relentless racism on and off the field,” he said.

“We share some similar stories and experiences – of disconnection from culture, language and country, and the constant pressures of being an Aboriginal man in this country,” he said.

“Goodesy is much more than a great footballer though, he took a strong stand against racism and said, ‘enough is enough’. I stand strong with you too, brother.”

Goodes, one of Australia’s most high-profile indigenous sportsmen, retired from the AFL in 2015 after being subjected to repeated booing.

Many believe the abuse was racially motivated and stemmed from him taking exception to being called an “ape” by a young spectator two years earlier.

Since retiring, Goodes has been active in promoting indigenous literacy and rights. The Archibald Prize is awarded by the Art Gallery of New South Wales for portraiture.

A self-portrait by another indigenous painter, actor Meyne Wyatt, won this year’s “Packing Room Prize”, which is awarded by gallery staff who handle submissions for the Archibald.

He was also the first Aboriginal artist to take that award.