A patriotic event in Hangzhou, in China’s eastern Zhejiang province, celebrates the 70th year of the founding of the People’s Republic of China

China marks 70 years of Communist rule next week, with a massive military parade in Beijing anchoring celebrations of its emergence as a global superpower, despite a damaging year of trade tensions with the US and pro-democracy unrest in Hong Kong.

The anniversary is meant to showcase China’s extraordinary rise from the ravages of war and famine to a modern, powerful nation state whose economic and military muscle is viewed by many with increasing concern.

This stunning transformation radically altered the social and physical landscape as hundreds of millions of rural Chinese poured into booming cities to power the “factory of the world” into the globe’s second largest economy.

Tuesday’s military procession across Tiananmen Square will showcase the army’s most advanced weaponry, including 160 aircraft, in a bid to drum up patriotic fervour and support for the Chinese Communist Party (CCP), with President Xi Jinping at the centre.

But the planned narrative has been disrupted by months of unrest in Hong Kong, a painful US trade war, international criticism of human rights abuses against Muslim minorities in Xinjiang, and soaring food prices.

Security has been ramped up ahead of the parade, with facial recognition, ID checks and searches for those entering Beijing by car, toy weapon sales banned and flying kites forbidden.

Roads have closed on weekend evenings for tanks to roll through in rehearsal. Fighter planes have roared in formation overhead.

Hundreds of thousands of government workers and students have been marching in practice, a participant telling the state-run Global Times they were given adult diapers as there was no time to take toilet breaks.

Twitter-like Weibo has been removing content that “distorts” the official narrative of history, while at least one human rights activist told AFP he was being forcibly sent out of Beijing during the celebrations.

“Xi and the CCP’s grip on power is strong. They have complete control over the media and more importantly the police and military,” said Eleanor Olcott, China policy analyst at research firm TS Lombard.

“The CCP, throughout their 70-year leadership of China, have inculcated a strong ethno-nationalism that remains the bedrock of their legitimacy and popularity.”

A military procession across Tiananmen Square will mark 70 years of Communist rule next week, and showcase the army’s most advanced weaponry © AFP

It hasn’t been a smooth 70 years since Chairman Mao Zedong founded the People’s Republic of China on October 1, 1949.

The Party promised to serve a people worn down by years of poverty, a brutal war with Japan and civil war.

But the country was plunged into years of famine — some estimate as many as 45 million died during Mao’s disastrous policy known as the Great Leap Forward.

China then spiralled into the chaos and violence of the decade-long Cultural Revolution which saw millions persecuted, imprisoned or killed.

After Mao’s death in 1976, Deng Xiaoping started a period of opening up and economic reform, leading to breakneck growth and development.

But the party has maintained its authoritarian ways, sending soldiers and tanks to quash pro-democracy protests at Tiananmen Square in 1989.

Xi has extinguished any hopes of political reforms since taking office in 2012, tightening his grip on power, cracking down on civil society and removing presidential term limits to become the country’s most powerful leader since Mao.

“Only with the road of socialism with Chinese characteristics can we lead China toward prosperity and strength,” Xi said at an exhibition on the anniversary on Monday, according to official media.

China will mark 70 years of Communist rule next week, with a massive military parade in Beijing ©AFP

The anniversary comes in a very bad year for Xi.

The US-China trade spat threatens to pummel the global economy, while African swine fever has sent the price of pork — the country’s staple — soaring.

The biggest challenge has been months of unrest in semi-autonomous Hong Kong, a former British colony ruled under a “one country, two systems” policy that gives citizens liberties unseen on the mainland.

Pro-democracy protesters claim those rights are being eroded and have openly criticised Beijing — provoking fears China could resort to a heavy-handed intervention.

For Xi, the crises have left him with limited room to act and simultaneously shore up support at home in a slowing domestic economy.

“Staggering economic growth alone is no longer seen as a panacea to surmount all of the challenges faced by the party,” said Yu Jie, senior research fellow at Chatham House.

But most experts agree there are no serious challenges to Xi’s control, and some challenges have even been repurposed to support the country’s ideological aims, warning of anti-China forces.

“They are events on the periphery of the Chinese nation and ones that the majority of the mainland population support the government on,” said Olcott.

She said Xi will use the anniversary to send a message that “the Party and the Chinese nation can get through the hard times in order to emerge a stronger country.” 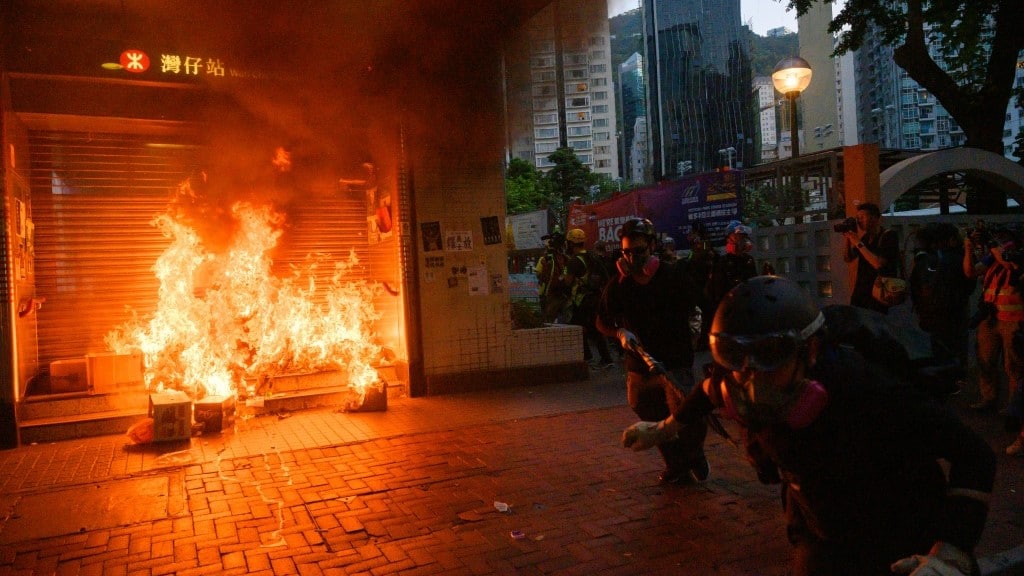