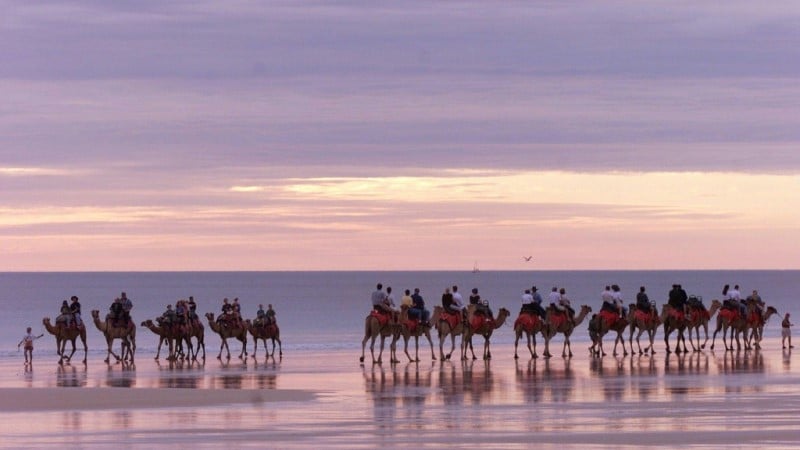 Camels are now a tourist attraction in Australia, but in the 19th century Muslim and Sikh camel drivers were brought to Australia by colonial British administrators to open up the dry center of the country.

That sudden awareness of a forgotten part of Australia’s history is now the basis of the director’s first feature film, “The Furnace,” which premiered at the Venice film festival on Friday.

“I couldn’t believe what I was looking at,” MacKay told AFP. “To see men in their traditional garb with a camel train behind them in the otherwise familiar outback was pretty revelatory.”

Enter six years of work to bring the historical drama to the screen — including painstaking work piecing together dialogue spoken in Badimaya, a dying Aboriginal language.

“The Furnace” points a lens on forgotten Islamic and Sikh cameleers whose stories have been eclipsed by white settlers’ history.

Set amid the late 19th century gold rush in Australia, the film follows a young cameleer from Afghanistan, Hanif (Ahmed Malek), who finds himself partnered with a bushman and fugitive thief Mal (David Wenham).

Helped by Hanif’s camels and in pursuit by the law, the two embark on an odyssey through Western Australia’s inhospitable outback in search of a furnace to melt down stolen gold bars.

Cameleers from Afghanistan, Persia and the Punjab region straddling India and what is now Pakistan — all dismissively referred to as “Ghans” by white settlers — were brought to Britain’s then-colony Australia to help cart goods through the desert, often on an indentured basis.

“It’s a hugely important part of Australian history that not only is the rest of the world not so aware of, but Australians themselves aren’t aware,” MacKay said.

Their interaction with local Aboriginal populations mean that some Australians today living in remote desert communities do not know the true history of their Sikh and Afghan last names.

Five languages are spoken in the film besides English: two Afghan languages (Pashto and Dari), Punjabi, Cantonese and Badimaya, a language of Aboriginal Australians.

Because the last speaker of Badimaya died one year before shooting, a team had to piece together appropriate dialogue with the Aboriginal community.

“It was certainly a much more exhaustive and lengthy process but also a great deal more meaningful because we felt we were really doing our bit from stopping this language from vanishing off the face of the earth,” MacKay said.

MacKay said the timing of the film — arriving in a year in when non-white talent is being actively sought out by the Western movie industry — was accidental, but fortunate.

“You’re walking in the shoes of this Muslim character. Pitching a story like that in 2014 when diversity on screen wasn’t such a big agenda was tricky and not a lot of people were interested,” he acknowledged.

“So I’ve bizarrely enough watched the world come more in alignment with that.”