From Manhattan to Hiroshima: the Race for the Atom Bomb 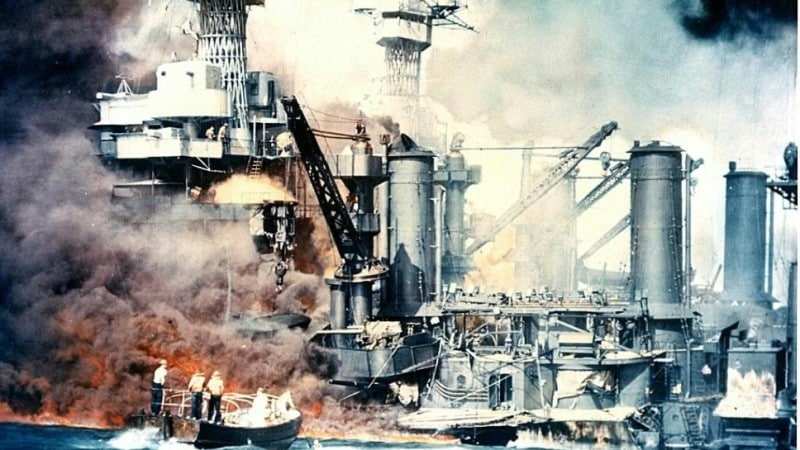 A photo from the National Archives of the Japanese December 7, 1941 attack on Pearl Harbor, Hawaii

The atomic bombings of Hiroshima and Nagasaki capped six years of top-secret work by scientists from Europe and North America. Here is an overview of how that process unfolded.

In 1939, Albert Einstein signs a letter warning US president Franklin D. Roosevelt of the destructive potential of nuclear fission, which was discovered by the German chemist Otto Hahn. The letter says the process could result in “extremely powerful bombs of a new type”. Roosevelt creates the Advisory Body on Uranium.

On December 7, 1941, Japanese warplanes destroy much of the US Pacific fleet based at Pearl Harbor. The next day, the United States enters World War II.

In August 1942, the US officially launches a top-secret program to develop an atomic bomb. The project, which had been approved the previous year, comes to be known as the “Manhattan Project”. Approximately two billion dollars are spent to achieve its goal.

In 1943, Robert Oppenheimer is named scientific director of a secret lab at Los Alamos, New Mexico that is to build the bomb. The project includes top physicists from the US, Britain and Canada, in addition to several who fled the Nazi occupation of their homelands in Europe.

Around spring 1945, possible targets are evaluated and a list drawn up of Japanese cities that could be hit with an atomic bomb. At the top of the list is Japan’s seventh-largest city, Hiroshima. Kyoto is rejected as a target owing largely to its historic and cultural importance.

On March 9-10, 1945, US warplanes carry out massive firebombing attacks on Tokyo and other major Japanese cities. Around 100,000 people die in the capital alone. 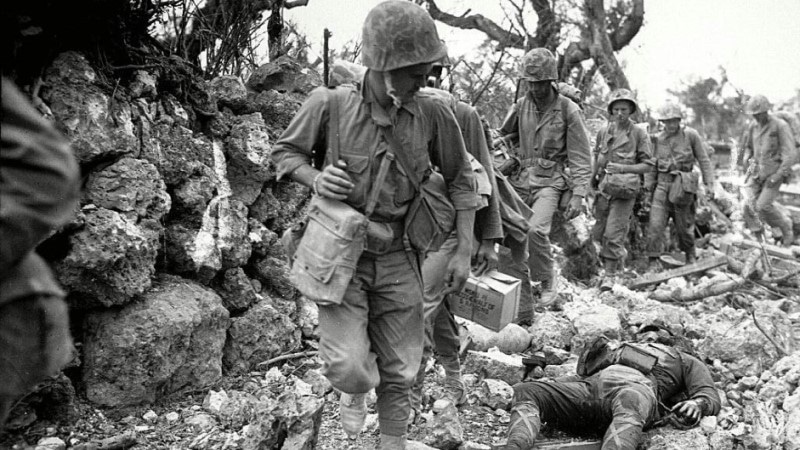 An April 1945 file photo from The National Archives shows US Marines passing through a small village in Okinawa, Japan, where Japanese soldiers lie dead

On March 26, the battle of Okinawa begins. More than 100,000 Japanese soldiers and a similar number of civilians die over the next three months, while 12,000 US soldiers are also killed. The battle is used by US officials to justify using atomic bombs, since an invasion of mainland Japan is forecast to result in an even higher cost.

On April 12, Roosevelt dies and Harry Truman becomes president of the United States and learns of the “Manhattan Project”.

On May 8, Germany surrenders, but fighting continues in Asia and the Pacific.

Between May and July, components of the atomic bombs are shipped to Tinian, an island in the Marianas chain from where B-29 bombers are able to reach Japan.

On July 16, at 5:30 am, the “Trinity” test takes place near Alamogordo, New Mexico, demonstrating the awesome power of an atomic bomb and marking the dawn of the nuclear age.

On July 25, Truman agrees to a mission to drop an atomic bomb on Japan. It included approval to drop additional bombs as soon as they became available.

On July 26, in the Potsdam Declaration, Britain, China and the United States warn Japan that it must surrender or face “prompt and utter destruction”.

Japan decides to “ignore” the ultimatum, although the word used – — mokusatsu — also translates as “no comment”. 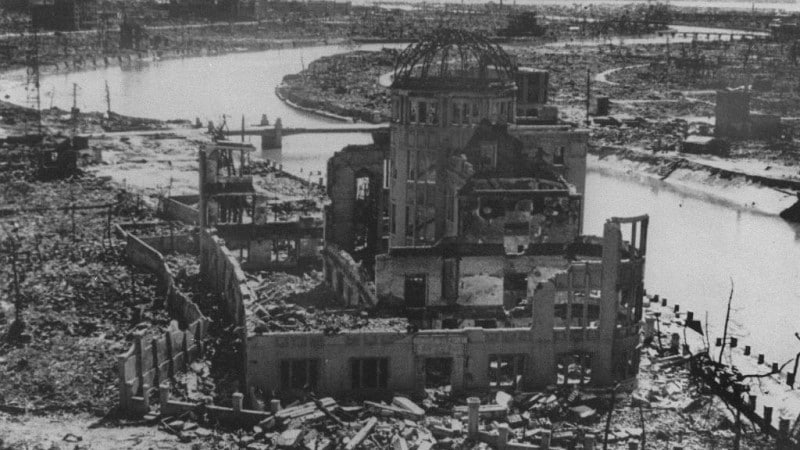 On August 6 the US B-29 bomber “Enola Gay” drops a 9,000-pound atomic bomb over Hiroshima at 8:15 am, killing 140,000 people by the end of December, according to a widely accepted toll. Truman tells Japanese leaders that if they do not surrender “they may expect a rain of ruin from the air, the like of which has never been seen on this Earth”.

On August 8, the Soviet Union declares war on Japan.

On August 15, Japanese Emperor Hirohito tells his nation it has lost the war. He remains on the throne during post-war reconstruction of the country.

On August 29, 1949, four years after Hiroshima and Nagasaki are destroyed, the Soviet Union successfully tests its own atomic bomb in Kazakhstan and becomes the world’s second nuclear power.