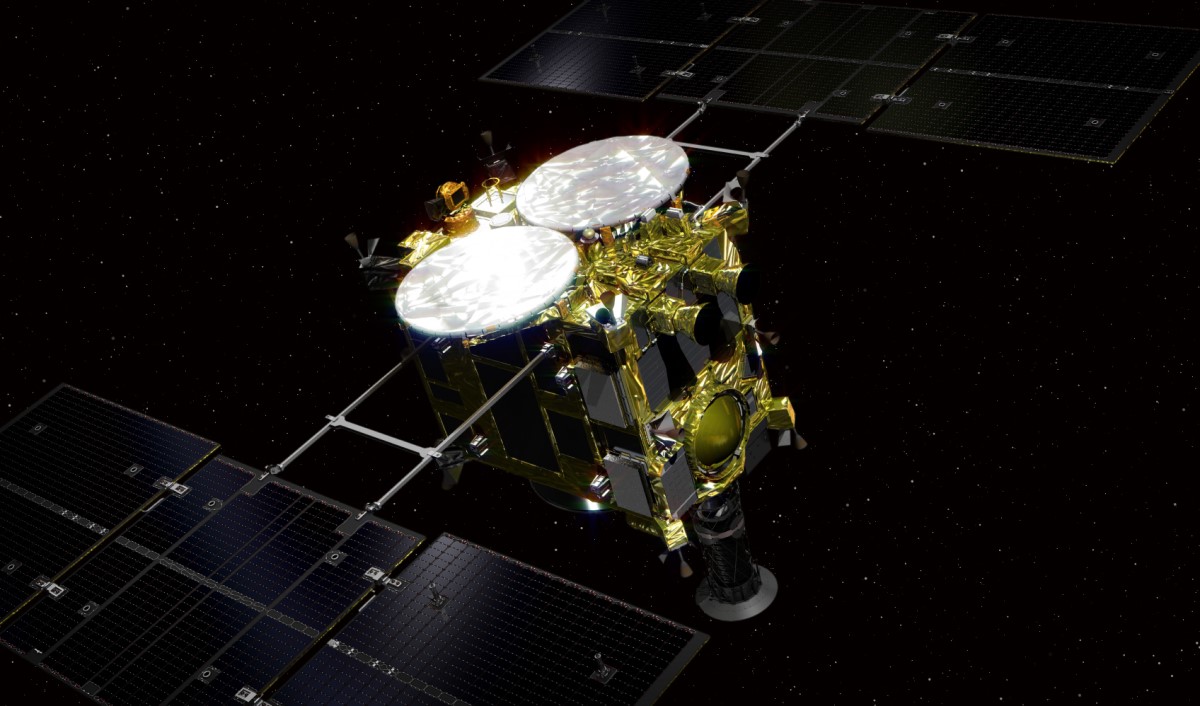 Japan’s space agency just dropped an explosive update confirming that its space probe, the Hayabusa2, has successfully fired an explosive device capable of blasting a crater on the asteroid Ryugu. The purpose is to allow the collection of underground samples which would then be examined to find more clues on the birth of our Solar System, 4.5 billion years ago.

The Hayabusa2 Asteroid Mission In Stages

The Hayabusa2 is a spacecraft launched in 2014 by the Japan Aerospace Exploration Agency (JAXA). Its mission is to get close to an asteroid called Ryugu, located about 190 million miles from our planet and measures around 900 meters-wide.

The probe has been orbiting around the ancient space object since 2018 and its prime objective is to grab material samples from Ryugu which would then be brought back to Earth for study.

September of last year, Hayabusa2 made its first major move of deploying a couple of robotic rovers on Ryugu. It scanned the space rock’s surface, collecting data and images along the way.

After this initial contact, the mission dropped yet another robotic instrument which allowed the agency to take a closer look on the asteroid’s terrain.

And in February of this year, Hayabusa2 slowly descended towards Ryugu’s surface, giving it a closer vantage point from where it then fired a bullet-like projectile. The operation sent space debris shooting everywhere, where it even hit the probe’s collector.

Just this month, Hayabusa2 lowered itself again on Ryugu’s surface for another strike. This time around, however, the probe was programmed to shoot with more force of impact.

To do this, they employ a cone-shaped canister containing high explosive materials. Almost immediately after firing the projectile, Hayabusa2 skirted away to a safe distance, effectively avoiding the shooting debris.

JAXA was able to document and even broadcast the entire collision process between Ryugu and the explosive device called the Small Carry-on Impactor (SCI).

Upon reaching Ryugu’s surface, SCI’s packed explosive detonated, shooting what’s basically a copper cannon ball towards the asteroid at the speed of 1.2 miles per second.

The Japanese authorities have yet to shed more details on the detonation and its resulting impact on Ryugu. However, the resulting size of the crater can at least be determined by what type of surface material the copper ball hits. With the right circumstances, the SCI explosion could create a crater as wide as 10 meters across.

When the dust has settled, the Hayabusa2 main probe will circumvent again to the region it has just blasted.

Getting the Right Samples

The Japanese space agency hopes to accumulate underground samples of the asteroid which they believe could contain water and organic substances. These findings could reportedly lend more explanation as to how our Solar System has come to be.

It’s quite interesting to note though that there already exists a crater in the asteroid from which the mission could definitely take samples from.

However, it is deemed more ideal to get these so-called rock specimens inside the freshly-blasted crater. As such, Hayabusa2 would be able to collect deeply-buried chunks of materials which haven’t yet been exposed to space environment for eons.

The samples, depending from which option the Hayabusa2 will take, are slated to be shipped back to Earth by the end of 2020.