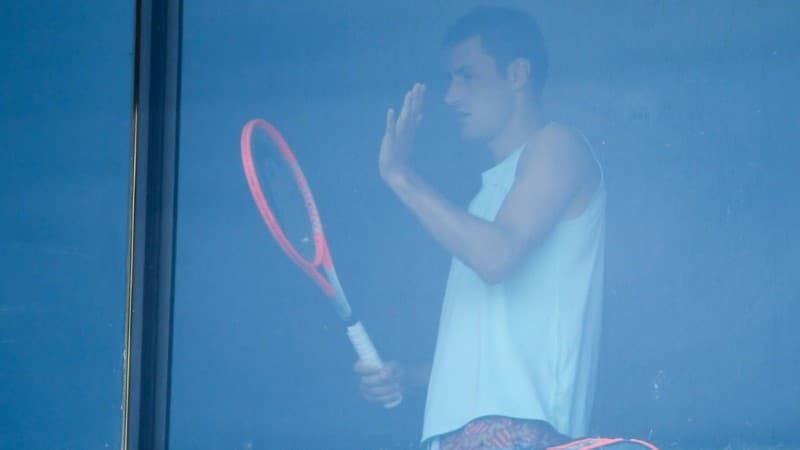 Dozens of tennis stars stuck in hotel quarantine ahead of the Australian Open were told Monday they would get no “special treatment” to leave their rooms to train, despite complaints from some players.

Australian health authorities rejected demands for tough isolation rules to be eased, as players resorted to hitting balls off windows, walls and upturned beds in the hope of being ready for the year’s first Grand Slam.

The Australian Open is due to make a delayed start in Melbourne on February 8, but its troubled build-up hit further problems after positive coronavirus cases were detected on three of the 17 charter flights that carried players and staff.

The 72 players on the three planes have been deemed close contacts of the four Covid-19 cases and barred from leaving their hotel rooms for 14 days, as largely virus-free Australia tries to prevent community transmission. 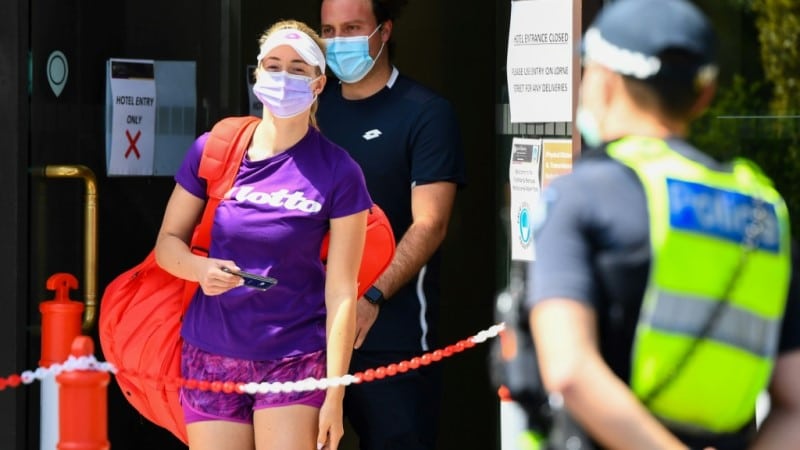 Some players are allowed to leave their hotel rooms to train

Heath authorities said they discovered two more cases linked to the tournament on Monday, bringing the total for the Australian Open cluster to six.

Several players have taken to social media to complain about conditions.

World number one Novak Djokovic — who arrived on a virus-free flight and is being allowed to train in a bio-secure bubble — reportedly sent a list of demands to tournament organizers that included allowing players to move to private homes with tennis courts.

Victoria Premier Daniel Andrews smashed back that request, saying authorities would not bend strict health rules any further for the players.

“There’s no special treatment here. Because the virus doesn’t treat you especially, so neither do we,” he said.

The arrangements have sparked a backlash in Australia, with some social media users questioning why more than 1,000 players and staff were flown in for the sporting event, when tens of thousands of Australians remain stranded overseas.

The country closed its international border in March and has since limited the number of its own citizens who can return each week. 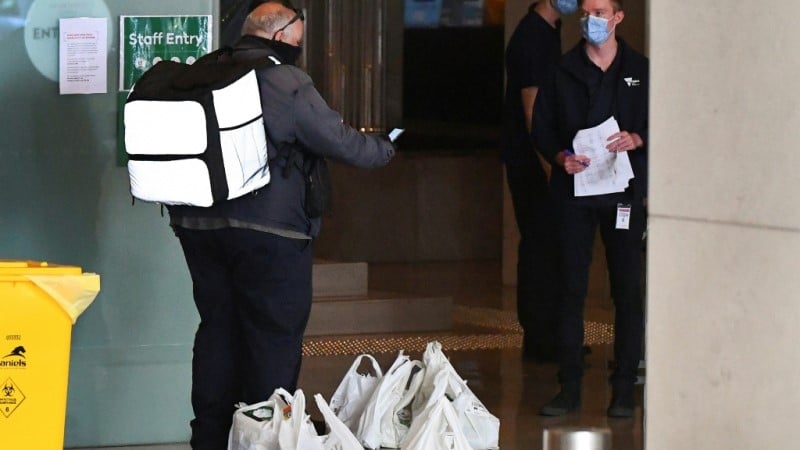 Food delivery workers have brought food for the players

Meanwhile the majority of players are allowed out to train for five hours a day, unlike other returned travelers who are confined to their hotel rooms for the full 14 days.

Andrews said all players knew about Australia’s strict quarantine rules ahead of their flights.

“The notion that there’s been any change, the notion that people weren’t briefed, I think that argument really has no integrity whatsoever,” he said.

Some pointed out that the host city of Melbourne had endured a gruelling four-month lockdown last year after a virus outbreak.

“Our health safety is more important to us than your feelings of privilege and entitlement,” one Twitter user wrote.

“Most of us here in Melbourne do not want tennis players here potentially reintroducing the virus and causing us to go back to harsh restrictions,” another added.

French player Alize Cornet issued an apology to Australians on Twitter after earlier deleting a tweet that called the quarantine “insane”.

“Your reaction to this tactless comment made me realize what you’ve been through last year & how much you suffered,” she wrote.

“I guess I feel a bit anxious about all this & I better have shut my mouth.” 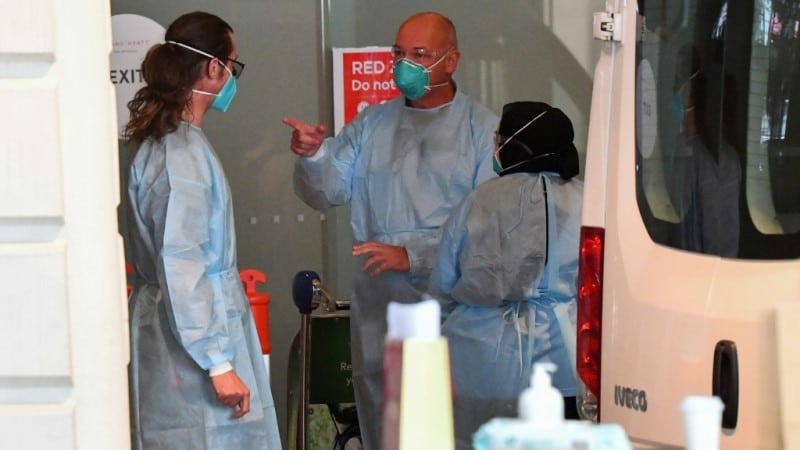 Tennis Australia has begun delivering exercise equipment to the isolated players who are concerned about the risk of injury when they finally hit the courts for a week of lead-in tournaments to start in Melbourne from January 31.

The doubles player told public broadcaster ABC the situation was “not ideal” but he was “staying positive and hoping for the best”.

“I’m trying to do as much as I can — all the stretching, all the exercising and anything I can possibly do — and hoping for the physios when they come out to do some magic here,” he said. 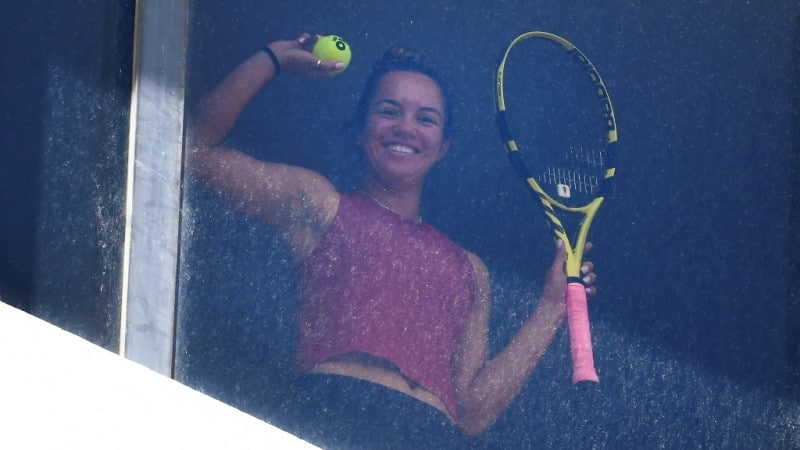 Indoor game: A player waves from her window after an impromptu training session under quarantine in her Melbourne hotel room

From bitter social media posts to workouts using mattresses as hitting partners, dozens of the world’s best tennis players confined to Australian hotels for two weeks are dealing with their confinement in contrasting ways.

The Australian Open in Melbourne has been delayed three weeks until February 8 because of the coronavirus pandemic, and has run into new problems this week.

Positive Covid-19 cases on three of 17 charter flights into the country mean 72 players have been confined to their rooms for the entire 14-day quarantine period.

Others are allowed out, but only for five hours a day, to train in bio-secure ‘bubbles’.

It means players are having to cope with some unusual problems and find some creative solutions as they try to stay occupied and in shape over two weeks of isolation: 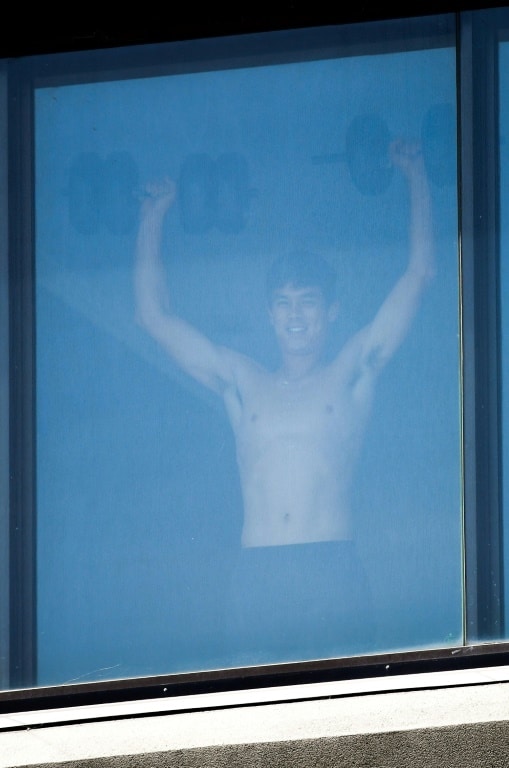 Instead of working on shot technique, one player was pictured in his hotel window lifting dumbbells over his head

World number 12 Belinda Bencic revealed her new training method for quarantine, posting a video of her practicing two-handed backhands against her hotel window.

Her hotel neighbors may have had something to say about the racket, but she seemed to have no problem with her new glass training partner, which returned every shot.

“Wrong surface, but that doesn’t matter for us,” she tweeted.

Uruguayan star Pablo Cuevas, ranked 68th in the world, used another clever hack for his backhand practice: a mattress turned vertically against the wall.

Instead of working on shot technique, one player was pictured in his hotel window lifting dumbbells over his head.

Several players took to social media to complain about the hotel food on offer.

Europeans Fabio Fognini, Pablo Correno Busta, Corentin Moutet and Marco Cecchinato all posted their disapproval of the Aussie fare served to their rooms.

“Really?” asked Busta, alongside photographic evidence of his culinary horror.

Others chose to avoid the quarantine menu altogether, throw their diet out of the window, and order fast food to their room.

World number 28 Benoit Paire and world number 118 Damis Dzumhur — who have racked up more than $10 million in career prize money between them — posted pictures of their chosen quarantine fuel: McDonald’s. 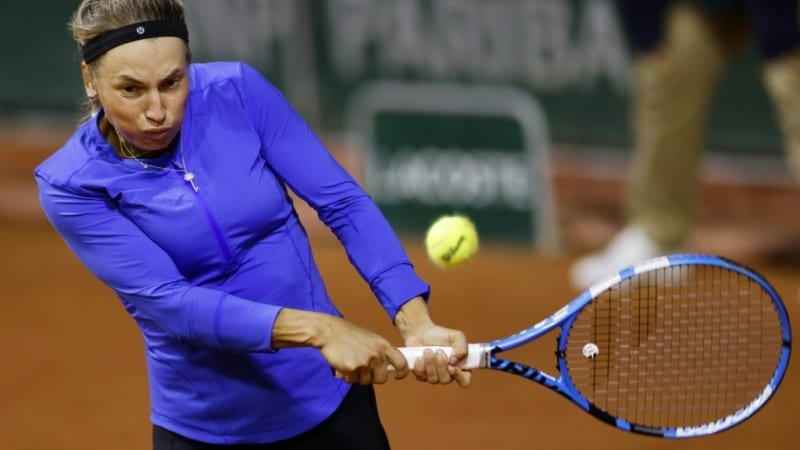 Kazakhstan’s Yulia Putintseva found a mouse in her quarantine room

Unlike other players, Kazakhstan’s Yulia Putintseva discovered that she was not alone in quarantine.

The world number 187 posted a video of a mouse running around her hotel room and tweeted that she tried to move to another room without success because of the strict quarantine rules.

She said the unwanted roommate was the fault of the authorities who selected her quarantine location.

“They put me not in the nicest hotel like other players!” she wrote.

While some of the quarantined players posted about their revamped diets and training regimes, others showed no love for their new surroundings.

Austrian Philipp Oswald called the two-week quarantine “crazy” and said the new rules were “never communicated to us” before the charters flights.

World number 71 Sorana Cirstea of Romania said she would not have travelled to Australia if there was a chance of hard quarantine.

“I have no issues to stay 14 days in the room watching Netflix. What we can’t do is COMPETE after we have stayed 14 days on a couch,” she tweeted. 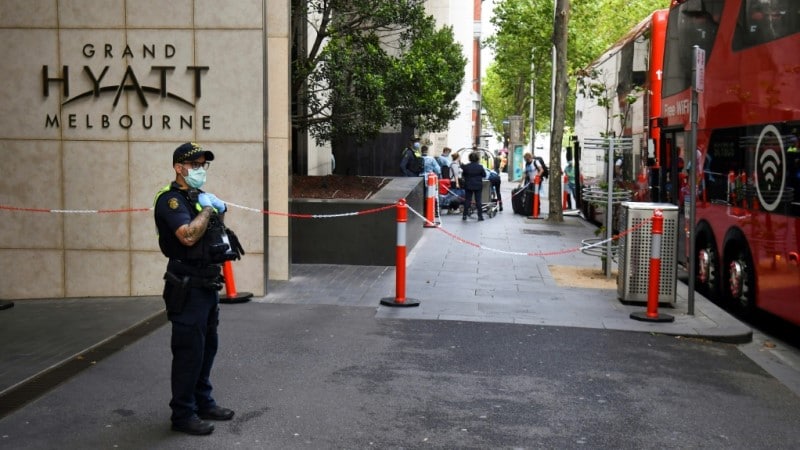 Many social media users have derided the players, accusing them of being entitled for moaning about their free stay while thousands of Australians remain stranded abroad.

Former tennis player and coach Roger Rasheed offered them some words of wisdom instead.

“You can create a program in your hotel room, which will be quite physical and demanding,” he wrote in a commentary Sunday for Melbourne’s daily newspaper ‘The Age’.

Rasheed said the players’ conditioning should have been sorted beforehand, and called on those complaining online to be more positive about their confinement.

“The players are lucky to come to a country with strict health measures… and should be grateful they can play a grand slam during the pandemic,” he concluded.