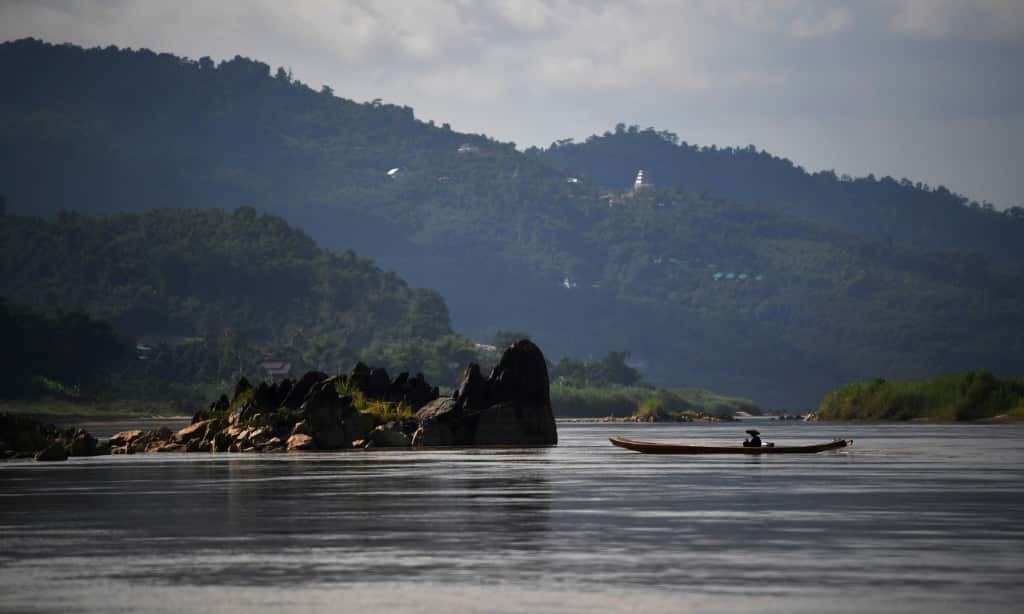 by Sippachai Kunnuwong
Ninety-seven kilometers of rocks in Thai waters stand between Beijing and dominance over the Mekong, a mighty river that feeds millions as it threads south from the Tibetan plateau through five countries before emptying into the South China Sea.

China has long wanted to dredge the riverbed in northern Thailand to open passage for massive cargo ships — and potentially military vessels.

Ultimately a link could be carved from Yunnan province thousands of kilometers south through the Mekong countries — Myanmar, Laos, Thailand, Cambodia and Vietnam.

There, the river emerges into the South China Sea, one of the world’s busiest shipping lanes and the centerpiece of Beijing’s trade and security strategy for its Asian neighborhood.

Under the tagline “Shared River, Shared Future” China insists it seeks only the sustainable development of the river and to split the spoils of a trade and energy boom with its Mekong neighbors and their market of 240 million people.

But squeezed for value by the dams lacing China’s portion of the river — and further downstream — the Mekong is already changing.

Fish stocks have collapsed say Thai fisherman, and nutrient-rich land in the Vietnamese delta is sinking as the sediment flow shrinks.

The river is rivaled only by the Amazon for its biodiversity, environmentalists say, but now endemic species like the giant Mekong catfish and river dolphins are facing extinction.

Environment versus big business. Geopolitics throttling a lifeline to 60 million people — big themes are playing out on a slow-moving river. 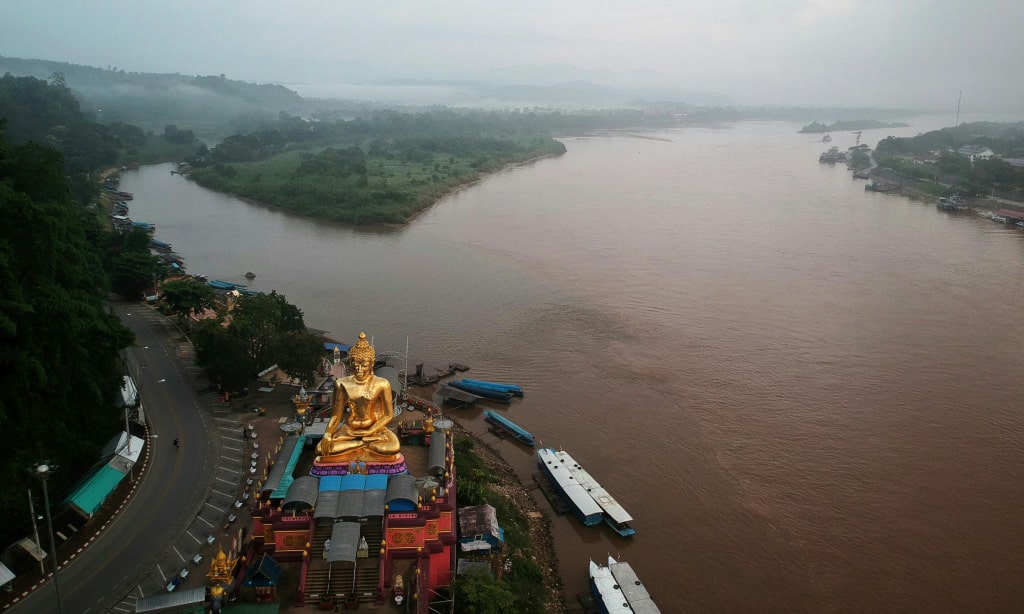 Zhang Jingjin’s tour group run through a catalogue of selfie poses in front of the “Welcome to The Golden Triangle” gate.

Below swirls a few hundred muddy metres of the Mekong.

It is the ‘Golden Triangle’, the intersection of northern Thailand with Myanmar and Laos, notorious for conflict and drugs — but now getting plump on Chinese investment.

“If more boats can pass there will be more visitors, more trade and more business,” Zhang, a jovial elevator salesman from Beijing, says.

“Business is good for everyone.”

First the shoal at the Golden Triangle will have to go — one of 15 sets of rocks, rapids and sandbars impeding ships’ progress along the river. 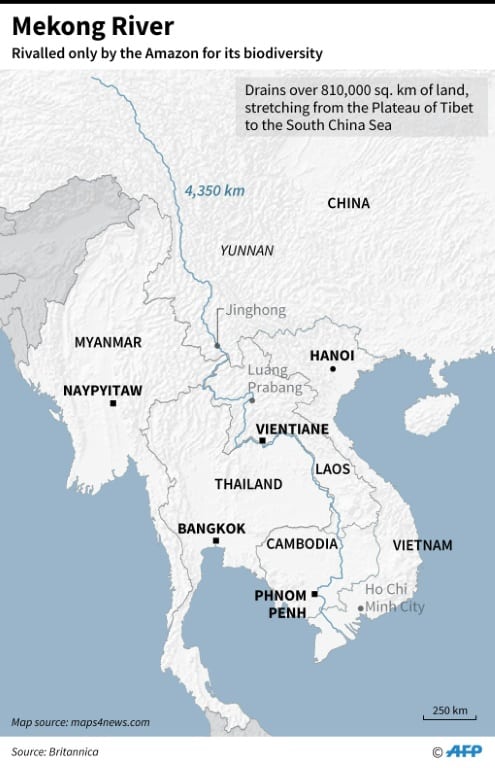 Once removed and dredged, deep-hulled boats carrying 500-plus tonnes of cargo could make the 600 kilometers (370 miles) journey from Yunnan to the Laotian colonial-era jewel of Luang Prabang.

The vision is to festoon both banks of the waterway with Special Economic Zones (SEZs) replete with condos, ports, rail and road links.

From Laos much of the river has already been opened south towards Cambodia, two key — and poor — allies readily softened up by Beijing’s investment billions.

But for now proposals by a subsidiary of China Communications Construction Company (CCCC), the world’s second-largest dredging firm, have stalled after sustained resistance by activists in northern Thailand.

“It’s resource politics… eventually they want to turn the Mekong into a ‘superhighway’ for cargo,” Pianporn Deetes of International Rivers told AFP.

The Bend in the River

A short drift downstream, Kome Wilai and his friends putter out midstream on long boats, returning to polish off beers and measure the river’s changes in their nets.

The catch has been pitiful for a fortnight, says the 38-year-old Kome, after a sudden drop in water level in the middle of the monsoon season.

“I’ve laid my nets twice today and got nothing. It’s the Chinese dam…. there is no water for the fish to swim or lay their eggs,” he explains.

The dam — the Jinghong — is one of 11 in China’s portion of the river, established as part of a hydro-electric power drive to help wean the country off coal.

Laos, through which a third of Mekong flows, plans many more across key tributaries.

A thicket of agreements encourage upstream countries to announce when they plan to store or discharge large amounts of water from their dams.

Still, in Chiang Saen the water often drops by 1.5-3 meters without warning.

“When they close the gate at the dam it affects everyone along the river,” says Prasong La-on, Chiang Sean district chief. “We have to accept it.”

The Chinese Embassy in Bangkok insists it does not hold back water for its farmers or turbines and “pays great attention” to the needs of its neighbors.

Meanwhile other analysts say the finger is pointing in the wrong direction.

“The reality is that China only accounts for 12 percent of the Mekong’s surface water,” says China Water Risk, a Hong Kong-based consultancy.

The “Western press has a pre-determined view of China which has spilled into how it approaches transboundary water,” it says, arguing downstream dams including in Laos, where the Thai-owned Xayaburi has just come online, cause the biggest impacts.

Whoever is behind the fluctuations, river communities fear the worst as each year brings unwanted records… the lowest monsoon water levels, the highest unseasonal floods.

“When the river is gone, it will be gone forever,” warns Grandpa Nart, a toothless 72-year-old boat driver, who has mapped the waters over a lifetime. 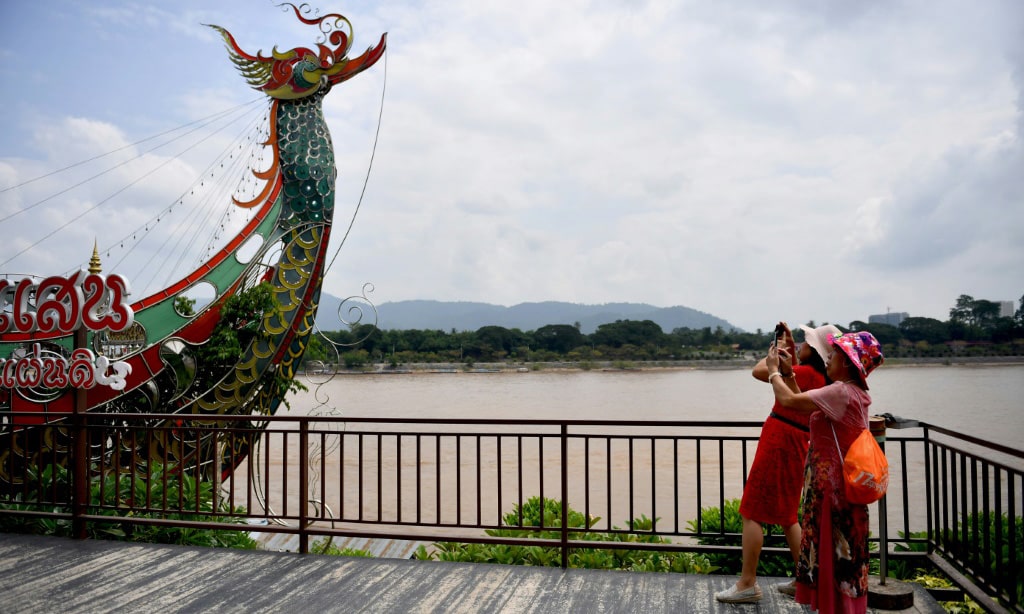 The ‘Golden Triangle’, the intersection of northern Thailand with Myanmar and Laos was notorious for conflict and drugs but it is now boosted by Chinese investment

If anyone has reasons for optimism about the river’s future it should be Niwat Roikaew.

The ponytailed conservationist leads ‘Love Chiang Khong Group’ which fought an unlikely 20-year rearguard defense against the blasting of the rapids.

In March, 2019, the Chinese government formally shelved its plans after his campaign led the argument that both the unique ecology of the river and Thailand’s sovereignty will be hollowed out by China’s dredgers.

“This is the egg-laying area for fish and birds,” Niwat says, gesturing to the boulders at Khon Pi Long, where water rushes as the river tightens up.

“This key ecosystem used to be seasonal. But now the river levels depend on the opening of the dam gates and the ecosystem can’t function,” he says.

“And they want to blast the rapids too? You’d kill the Mekong.”

The risks sharpen as the river flows downstream.

Cambodia’s vast Mekong-fed Tonle Sap Lake produces half a million tonnes of fish each year, the main supply of protein for the country, says Bryan Eyler author of “Last Days of the Mekong.”

Further along the lifeline Vietnamese delta is on the retreat as sediment gets clogged behind upstream dams causing anemic embankments to collapse into the water.

“Without that sediment distribution, the Mekong Delta will slip into the ocean faster than predicted,” he adds.

China disputes the gloomy scenarios while denying it has ever crafted firm engineering plans to blast the contested Thai stretch of water. 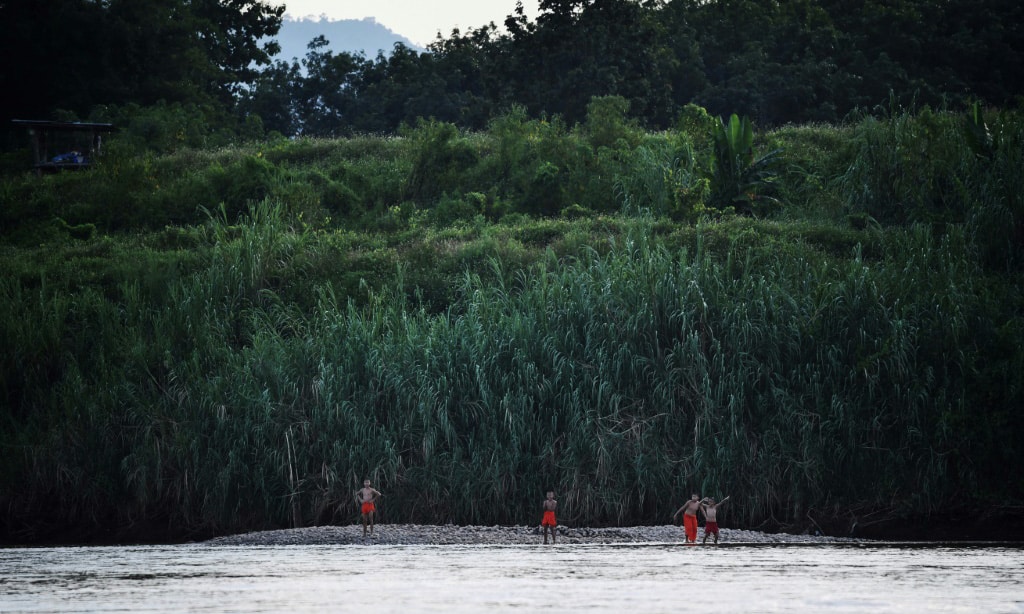 There are fears for the Mekong’s biodiversity as development spirals

It’s festival time and elders with big smiles and elegant hand-woven skirts sit in front of the Golden Phaya Naga — fire-breathing serpents of river lore — presiding over the entrance to a Buddhist temple decorated with frescos of Mekong life.

“Our culture and history are linked to the water,” says Samai Rinnasak after kneeling for blessings from the assembly of monks.

Economic growth and environmental change have long been reshaping that relationship.

Eventually, China is “going to do what it wants,” according to Thitinan Pongsudhirak, of the Institute of Security and International Studies, Chulalongkorn University, citing the build-up of dams, SEZs and cultivation of allies Laos and Cambodia.

“This is China’s way of power,” he adds.

An hour downstream in Huai Luek (kilometer 90-97) where pomelo plantations roll down to the riverbank, the final kilometers of rocks block Beijing’s decades-old aspiration.

Only ten fishermen remain in Thongsuk Inthavong’s village, a trade withered by the decreasing bounty of the Mekong.

The decay started in 2008, the former village chief says, when the Mekong turned brown overnight.

“Older people said it was the Phaya Naga churning up the river bed to build a nest,” he says. “But it was the same year the Chinese (Jinghong) dam opened.”

From his stilted wooden house he has also had a ringside seat to the transformation of the Laos’ bank from small-holdings into vast banana plantations –- all Chinese-owned.

The same investors have tried to entice Thai farmers to sell up – as small river communities fear checkmate is edging closer.

“China plays with us like a toy,” Thongsuk says. “It makes me angry but we’ll defend our river.”