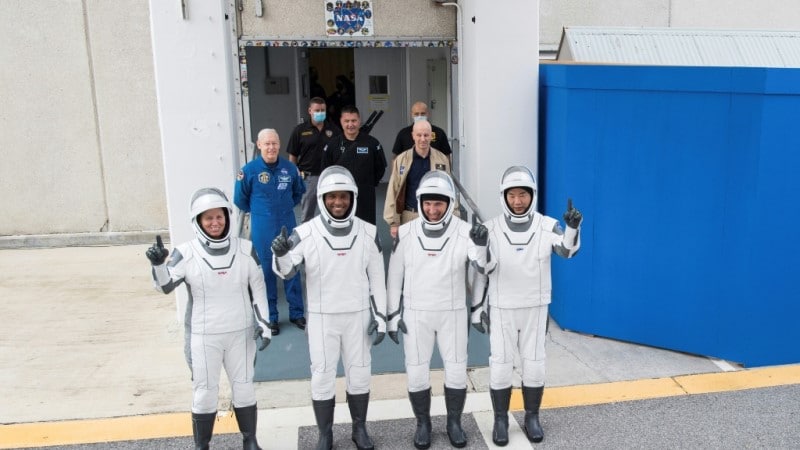 Four astronauts were successfully launched on the SpaceX Crew Dragon “Resilience” to the International Space Station on Sunday, the first of what the US hopes will be many routine missions following a successful test flight in late spring.

Three Americans — Michael Hopkins, Victor Glover and Shannon Walker — and Japan’s Soichi Noguchi blasted off at 7:27 pm (0027 GMT Monday) from the Kennedy Space Center in Florida, thus ending almost a decade of international reliance on Russia for rides on its Soyuz rockets.

Twelve minutes after liftoff, at an altitude of 124 miles (200 kilometers) and a speed of 16,800 miles (27,000 kilometers) per hour, the capsule successfully separated from the second stage of the rocket. 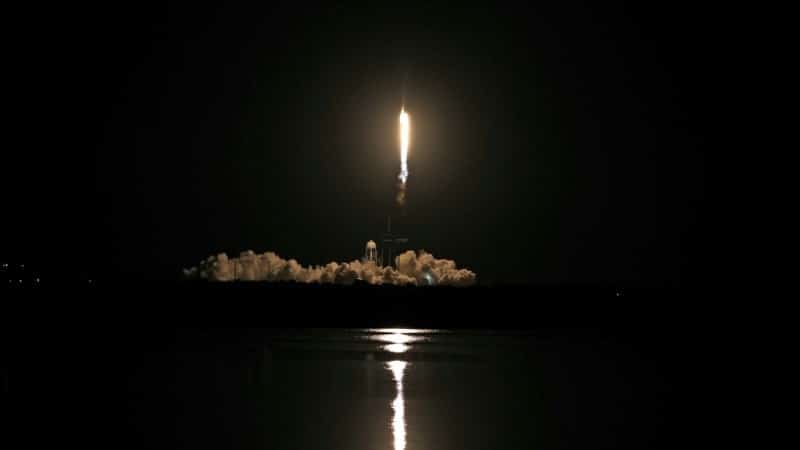 A SpaceX Falcon 9 rocket lifts off from launch complex 39A at the Kennedy Space Center in Florida on November 15, 2020

“That was one heck of a ride,” said mission commander Hopkins from orbit.

SpaceX confirmed that it was on the right orbit to reach the ISS a little more than 27 hours later, at around 11:00 pm Monday night (0400 GMT Tuesday), joining two Russians and one American aboard the station, and stay for six months.

There was a problem with the cabin temperature control system, but it was quickly solved.

“She’s operating just fine,” said SpaceX president Glynne Shotwell during the press conference. But “we’ll be able to breathe a sigh of relief, 26 or so hours from now, once we hand the crew over to NASA.”

SpaceX briefly transmitted live images from inside the capsule showing the astronauts in their seats, something neither the Russians nor the Americans had done before.

US President-elect Joe Biden hailed the launch on Twitter as a “testament to the power of science and what we can accomplish by harnessing our innovation, ingenuity, and determination,” while President Donald Trump called it “great.”

Vice President Mike Pence, who attended the launch with his wife Karen, called it a “new era in human space exploration in America.” 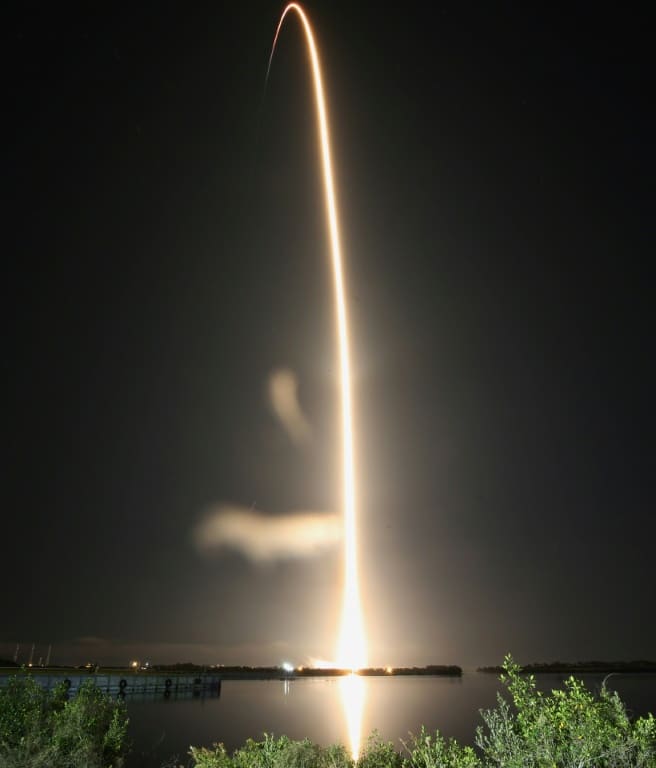 A SpaceX Falcon 9 rocket streaks toward space in this time exposure at liftoff from launch complex 39A at the Kennedy Space Center in Florida on November 15, 2020

The Crew Dragon capsule earlier this week became the first spacecraft to be certified by NASA since the Space Shuttle nearly 40 years ago. Its launch vehicle is a reusable SpaceX Falcon 9 rocket.

At the end of its missions, the Crew Dragon deploys parachutes and then splashes down in water, just as in the Apollo era.

SpaceX is scheduled to launch two more crewed flights for NASA in 2021, including one in the spring, and four cargo refueling missions over the next 15 months. 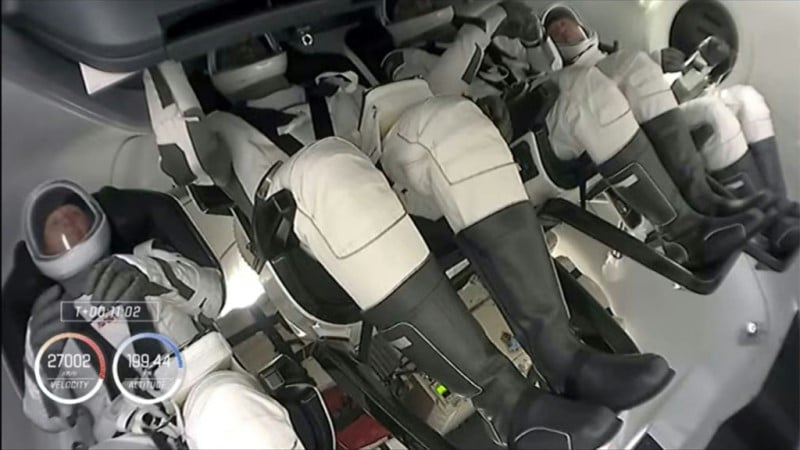 NASA turned to SpaceX and Boeing after shuttering the checkered Space Shuttle program in 2011, which failed in its main objectives of making space travel affordable and safe.

The agency will have spent more than $8 billion on the Commercial Crew program by 2024, with the hope that the private sector can take care of NASA’s needs in “low Earth orbit” so it is freed up to focus on return missions to the Moon and then on to Mars.

SpaceX, founded by Elon Musk in 2002, leapfrogged its much older rival Boeing, whose program floundered after a failed test of its uncrewed Starliner last year. 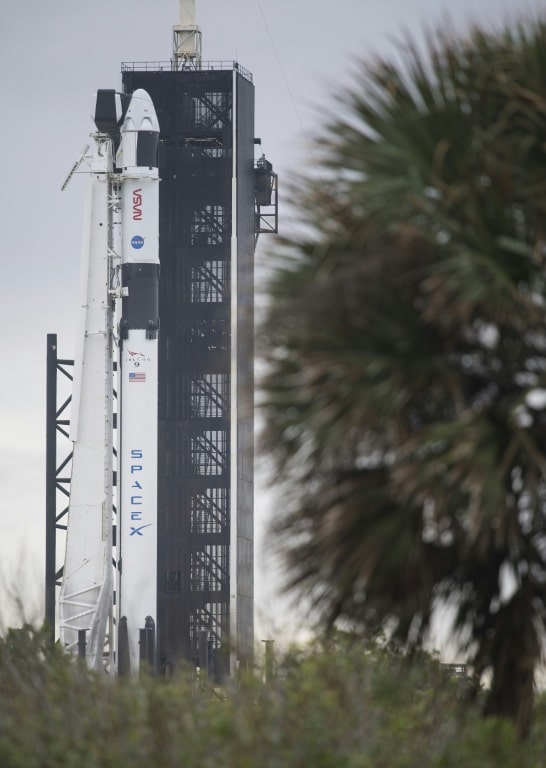 This handout photo released by NASA shows a SpaceX Falcon 9 rocket with the company’s Crew Dragon spacecraft onboard on the launch pad at NASA’s Kennedy Space Center in Florida on November 14, 2020

But SpaceX’s success won’t mean the US will stop hitching rides with Russia altogether, said Bridenstine. The goal is to have an “exchange of seats” between American astronauts and Russian cosmonauts.

He also explained it was necessary in case either program was down for a period of time.

The reality, however, is that space ties between the US and Russia — one of the few bright spots in their bilateral relations — have frayed in recent years.

Russia has said it won’t be a partner in the Artemis program to return to the Moon in 2024, claiming the NASA-led mission is too US-centric. 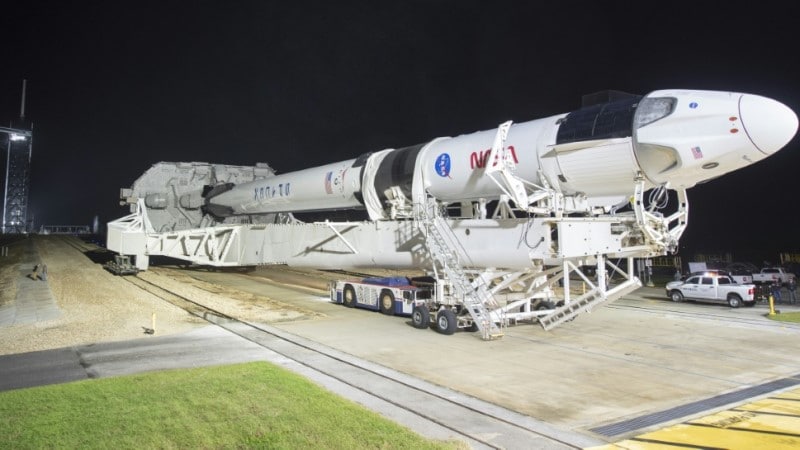 Dmitry Rogozin, the head of Russia’s space agency, has also repeatedly mocked SpaceX’s technology, telling a state news agency he was unimpressed with the Crew Dragon’s “rather rough” water landing and saying his agency was developing a methane rocket that will be reusable 100 times.

But the fact that a national space agency feels moved to compare itself to a company arguably validates NASA’s public-private strategy.

The cost of round-trips on Russian rockets had been rising and stood at around $85 million per astronaut, according to estimates last year. 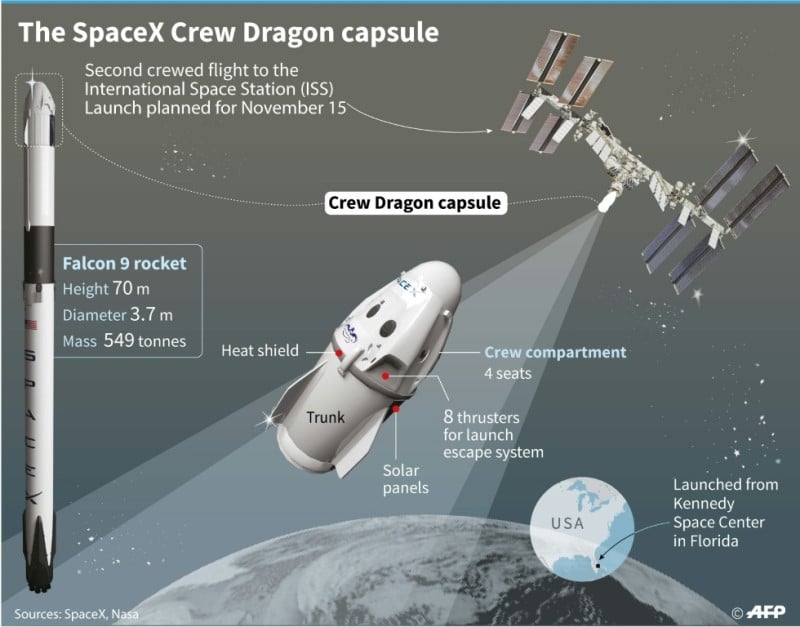 Presidential transitions are always a difficult time for NASA, and the ascension of Joe Biden in January is expected to be no different.

The agency has yet to receive from Congress the tens of billions of dollars needed to finalize the Artemis program.

Bridenstine has announced that he will step down, to let the new president set his own goals for space exploration.

So far, Biden has not commented on the 2024 timeline.

by Issam Ahmed and Ivan Couronne/afp