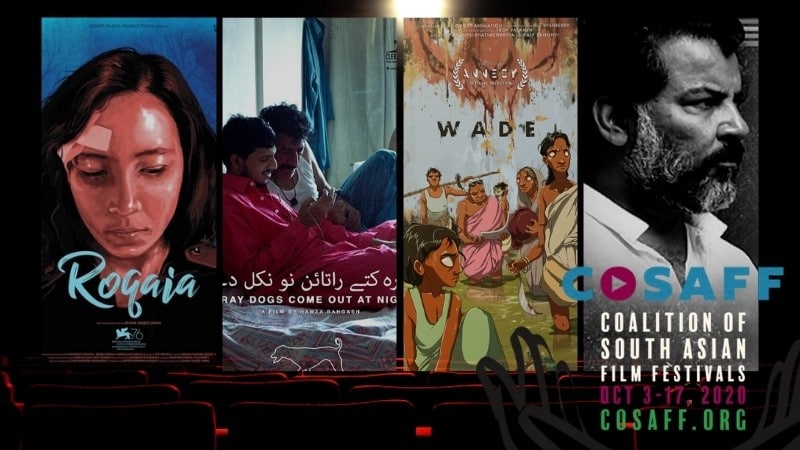 Seven of the leading South Asian film festivals join hands to launch a one of a kind 15-day digital event that will showcase amazing stories on diaspora, family, and the LGBTQ community, among others.

We caught up with Rita Meher, executive director of Tasveer, a Seattle-based South Asian social justice arts non-profit organization, to get some insider details about this revolutionary festival.

What was the most challenging thing for Tasveer to overcome to put together all 7 film festivals?

“An overall challenge that as a coalition we had to overcome was coming up with a logistical plan for conducting an online film festival. All of us have our strengths lying in physical festivals and this year on, we can all proudly say we’re also quite strong on the online front. This has been a great opportunity for all the festivals to learn the production nuances of a virtual film festival.” said Meher.

What was the most unexpected outcome from putting together this collaboration?

“Coming together from four different time zones across the U.S. and Canada, most of us haven’t ever seen each other in person at all! In addition to the member festivals, we have also had amazing sponsors and partners who came on board for the festival. This sense of community and togetherness is exactly what we wanted our audience to see and experiencing that for ourselves has been wonderful.”

Mee Raqsam or I Dance, the first film by Baba Azmi, has been selected to kickstart the virtual festival. The film revolves around the relationship between a father and his teenage daughter who dreams to become a dancer. Unfortunately, everyone around her small village questions her choices, except her dad. The film brilliantly showcases how a humble village tailor stood up for his daughter with dignity – a far cry from the toxic masculinity that is so common in today’s era.

According to the festival Programming Manager Ketki Asher, “Mee Raqsam is a lovely film that addresses so many timely and important themes, including celebrating the arts and finding commonalities and unity between us despite people having different religious or cultural backgrounds. It speaks to the ideas of tolerance and social justice, and about allowing young people to pursue their dreams, to thrive, and to embrace multiculturalism. In some ways, opening CoSAFF with such a film also exemplifies many of the ideals we all stand for as a coalition and individual festivals. So it was a fitting choice for us.”

The film already had an exclusive screening this year which was attended by big-time names in India like Aamir Khan, and Vidya Balan, who all sang praises for Azni’s directorial debut.

“To see the amount of love the audience has showered us from across the globe, it has been an overwhelming journey the past couple of weeks. It was the first film I was presenting and is a homage/tribute to our father Kaifi Azmi who was one of the torchbearers of India’s composite culture which the film celebrates,” said the film’s director.

The Hindi film was shot in Mijwan and its surrounding areas. The director hopes to reach out to more people through the festival to spread the message of hope and desire even more. The film showing will be followed by a live Q&A session.

Eeb Allay Ooo!, another Hindi film, will be concluding the festival on October 17. This is the first film by Prateek Vats, which centers on a man hired to shoo away the monkeys around New Delhi. The title itself are the sounds used by the monkey repellers to chase the sneaky animals away. Just like the opening film, its showing will be followed by a live Q&A Session.

When asked about the films they predict the audience will most resonate with, Asher said “All 64 films that are playing at CoSAFF have been selectively programmed keeping in mind our audience. Our aim while picking these films was to make sure we showcase powerful, timely, and inspiring stories from all South Asian countries and the South Asian diaspora across the world.”

Asher added that “some of the films to especially look out for are ‘A Democratic Proposal‘ from Sri Lanka, ‘Roqaia‘ from Afghanistan/Bangladesh, ‘Baadi‘ and ‘Stray Dogs Come Out At Night‘ from Pakistan, ‘Dogma‘ and ‘Binimoy‘ from India, ‘Junu Ko Jutta‘ and ‘Bare Trees In The Mist‘ from Nepal. I would also like to give a special mention to an animated short film ‘Wade‘ for its utter brilliance of storytelling.”

The short film Wade is an ambitious endeavor by Upamanyu Bhattacharyya, along with other film animators who graduated from India’s National Institute of Design, Ahmedabad. The project started in 2016 and follows a group of people and Tigers in future Calcutta, which is seen flooded in the aftermath of sea level rise due to climate change.

In their Wishberry campaign, Wade filmmakers shared  that “we believe that this is one of the first-ever animated short films from the country to actively show climate change and its implications as the core subject.”

“The impending effects of sea-level rise have been ignored by filmmakers and writers, which is ironic for a country like India which is very likely to feel the full impact of these changes,” they added.

Aside from the films, CoSAFF will also feature live virtual programs every day, which includes Q&As with actors and filmmakers. Other highly-anticipated parts of the festival are workshops, panels, and masterclasses with leading players in the South Asian film industry, as well as companies that are at the forefront of changing this year’s entertainment landscape.

Driven by Their Common Love for Films

According to the festival’s vision statement, what they envision is a unified South Asian community of film festivals, filmmakers, actors, and artists to come together and share their common love for films and storytelling.

“We aim to engage and entertain the audience, start dialogues, educate our community, and represent, include all South Asian countries and their diasporas worldwide,” the statement reads.

Meher said that since the pandemic started, they have been dealing with a lot of uncertainties and the arts community has been affected significantly. This festival is part of their initiative to show solidarity while entertaining and engaging their respective South Asian audiences.

“That’s when we thought it’d be great if all South Asian film festivals across North America could unite for this cause, and seven of us came together,’ added Meher.

When asked about future plans for the festivals, Meher shared that they’re still in the process of putting this year’s festival together, so they still haven’t discussed the future. If they do, fans will definitely be one of the first ones to know about it.

The full list of films is available on the CoSAFF website. To join the festival, register here for free.