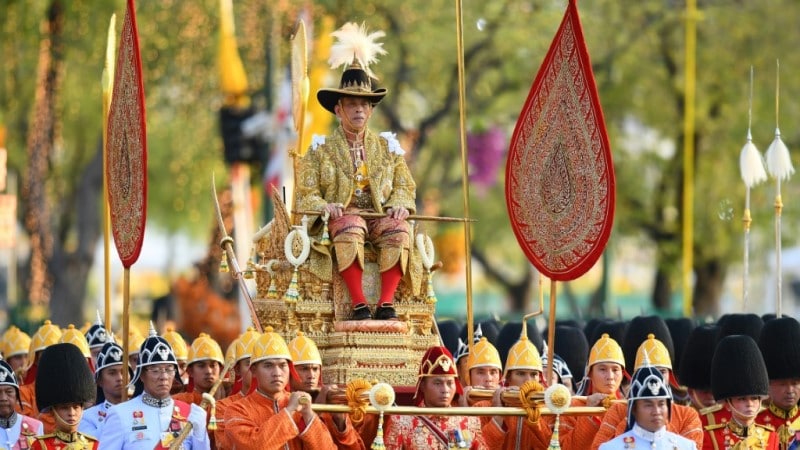 Thailand’s King Maha Vajiralongkorn is carried by golden palanquin during his 2019 coronation. Criticism of the royal family is outlawed by section 112 of the penal code

Thailand’s monarchy is protected by one of the world’s toughest defamation laws, making any criticism of the powerful King Maha Vajiralongkorn very risky inside the country.

After police arrested a number of prominent political activists Thursday, a government spokesman said charges will be pressed against those who obstructed a royal motorcade a day earlier and anyone who had acted “in a way that defames the monarchy”.

Under section 112 of Thailand’s penal code, anyone convicted of defaming, insulting or threatening the king, queen, heir or regent faces between three and 15 years in prison on each count.

But the law is routinely interpreted to include criticism of any aspect of the monarchy — including content posted or shared on social media.

In the harshest punishment so far, a man was sentenced to 35 years in jail in 2017 for a series of Facebook posts and comments about the royal family.

Lese majeste crimes have been on the books for over a century, but last strengthened in 1976.

How is it Enforced?

Anyone can make an accusation under the law and authorities are duty bound to investigate.

There is no transparent disclosure of the official number of lese majeste complaints, arrests, charges or sentences — only an inconsistent trickle of information from authorities.

The use of section 112 has risen dramatically since a 2014 coup by the arch-royalist military.

According to legal aid groups, just six people were jailed on lese majeste convictions before 2014. That number skyrocketed in the following five years, with 169 convictions.

Those charged are almost always convicted, but if they plead guilty sentences are often reduced.

Why so Many Cases?

Legal observers and rights campaigners say section 112 and other laws — including the Computer Crimes Act — are being used to target dissent.

UN special rapporteur David Kaye urged the regime in 2017 to stop section 112 prosecutions, saying such laws “have no place in a democratic country”.

The use of the law had slowed recently and Prime Minister Prayut Chan-O-Cha — leader of the 2014 coup — said in June the king had asked the government to “refrain” from using it.

That restraint could change following Thursday’s obstruction of the royal motorcade.

What is Punished Under Section 112?

Prosecutors have dramatically widened what counts as defamation of the royal family in recent decades to include social media and satire.

An anti-junta activist was convicted in 2017 after posting a news story on Facebook, even though more than 2,000 others had shared the same article.

His two-and-a-half-year sentence was cut short when the king pardoned him last year.

Another man was prosecuted in 2015 for satirical comments he made about the then-king Bhumibol Adulyadej’s favourite dog.

There is no comparative research that shows which countries use royal defamation laws the most, but historian David Streckfuss says Thailand’s prosecution rate had made the kingdom “the leader” since 2006.

Can the Media Report on it?

Domestic and international media must routinely self-censor their reporting of lese majeste cases and the monarchy in general or risk prosecution.

Even detailed reports on issues such as the list of recent demands from pro-democracy protesters could put reporters at risk.

Readers who share the news could also face prosecution, and even repeating or summarizing the details of section 112 charges could be interpreted as a violation.

Why is the Law in the Spotlight?

Thailand’s pro-democracy movement has gathered momentum in recent months, with rallies bringing thousands out on the streets.

Prominent activists have included the abolition of section 112 in their list of demands, calling for an open discussion of the royal family’s role in Thailand.

Events came to a head Wednesday when protesters disrupted a drive-by of the royal motorcade ferrying Queen Suthida and Prince Dipangkorn Rasmijoti — an unprecedented challenge and the royal family’s first close encounter with the protesters.

The king was not in the same limousine.