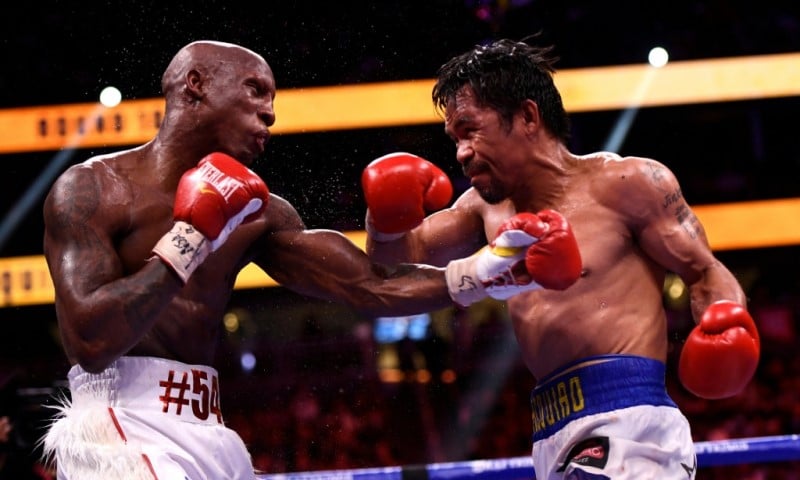 In his first fight after a two-year absence from the ring, Pacquiao was made to look every bit of his 42 years as the younger Ugas dominated with a stinging jab and cleaner punching to retain his WBA welterweight crown at Las Vegas’s T-Mobile Arena.

Ugas, 35, had only been drafted in to face Pacquiao earlier this month after the eight-division world champion’s original opponent Errol Spence Jr, suffered an eye injury in training.

But the defending champion from Cuba seized his opportunity brilliantly to win on all three cards, with one judge scoring it 115-113 and two others 116-112. 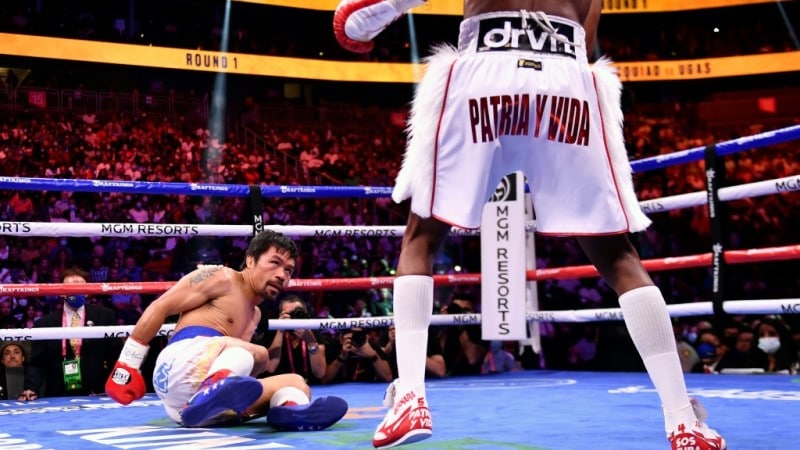 A deflated Pacquiao said afterwards he will take his time before deciding on his future, but admitted the boxing world may well have seen him in the ring for the last time.

“In the future you may not see Manny Pacquiao fight in the ring,” Pacquiao said. “I’ve done a lot for boxing and boxing has done a lot for me. I look forward to spending time with my family and thinking about my future in boxing.

“I did my best tonight but my best wasn’t good enough. No excuses. I wanted to fight for the title in the ring, and the champion tonight is still Ugas.”

It was a sweet victory for Ugas, who had been awarded the WBA title after Pacquiao was stripped of the belt by the sanctioning body earlier this year for inactivity.

“We only had two weeks of training but I listened to my corner and it all worked out,” said Ugas, who improves to 27-4 with 12 knockouts.

“I’m a warrior. I’ve been doing this since I was six years old. I knew deep down inside he wasn’t going to beat me tonight. I felt it coming to the fight and that’s what happened.

“I want to thank Manny Pacquiao for sharing the ring with me. He’s a legend, one of the greatest fighters that ever lived.

“I’ll always respect him not only as a great fighter but outside the ring.”

“I’ll hate to see the day Manny retires, but this could be it. We’ll see what Manny decides,” Roach said.

If Saturday’s fight turns out to be his last, Pacquiao can have few complaints about the eighth defeat of a career that has encompassed 72 fights spanning 26 years since 1995.

Although the Filipino was aggressive throughout, advancing with flurries of punches from the opening round, few of his blows inflicted significant damage on Ugas, who cleverly used his advantages in reach and height to frustrate Pacquiao.

Ugas meanwhile scored consistently with crisper punches that often rocked Pacquiao back on his heels.

Ugas’s jolting left jab caused problems for Pacquiao throughout, and he repeatedly did damage with a series of powerful rights.

After a cagey opening round, Ugas quickly asserted himself in the middle rounds, startling Pacquiao with a left-right combination in the fifth before ending the sixth with another hard right.

A T-Mobile crowd of 17,438 tried to rally Pacquiao with chants of “Manny, Manny” throughout but the Filipino’s legion of admirers grew steadily more subdued as the rounds wore on.

Pacquiao, with a cluster of red marks on his cheek and forehead a testament to Ugas’s increasing accuracy and effectiveness, continued to come forward as he sought a big round to change the complexion of the contest.

But Ugas would not be denied, and he had Pacquiao scrambling onto the defensive once again after landing a double left jab and a right hook in quick succession in the 10th, before closing out the final rounds to win.

The Cuban fighter’s greater accuracy was reflected in the post-fight stats, which revealed that Pacquiao landed just 130 of a total of 815 punches thrown. Ugas landed 151 of 405 thrown.