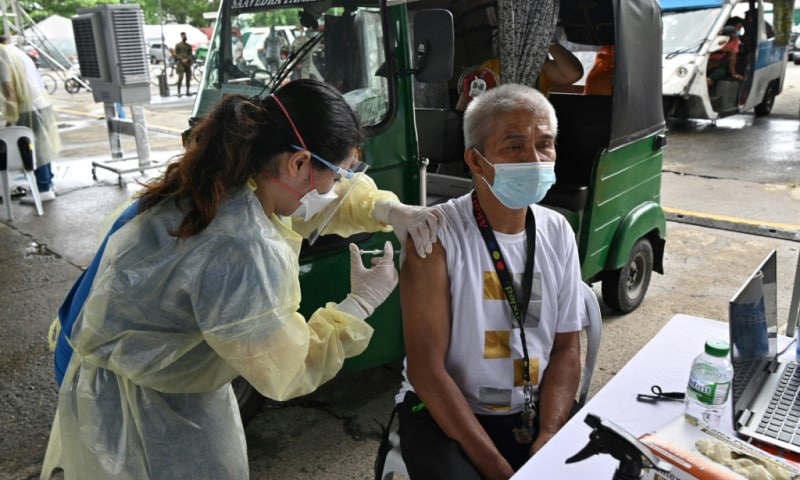 A taxi driver is vaccinated against Covid-19 in Manila

The Philippines will send more than 13 million people in the national capital region back into lockdown next week, the government said Friday, as it tries to head off a surge in cases of a hyper-contagious coronavirus strain.

Experts have warned of an explosion in infections fueled by the Delta variant that could overwhelm hospitals in the coming weeks if restrictions are not drastically tightened in the crowded capital.

“We had to make this difficult decision in order to save more lives,” President Rodrigo Duterte’s spokesman Harry Roque said on government television.

Restaurant dining and mass gatherings have been banned with immediate effect and a two-week stay-at-home order will start on August 6, Roque said.

The Philippines has recorded more than 1.5 million coronavirus infections — the second highest in Delta-ravaged Southeast Asia — including nearly 28,000 deaths.

So far, it has confirmed more than 200 Delta infections, many of them local cases, and there are fears the more contagious strain could tear through the nation like it has in neighboring countries.

Independent research group OCTA, which advises the government on its pandemic response, had called for an immediate lockdown in the capital, warning daily cases there could triple to 3,000 by mid-August if action were not taken.

“It could overwhelm (the health care system) in a few days at that rate,” Ranjit Rye of OCTA told AFP this week.

Duterte flagged the possibility on Monday, even as he lamented the country could ill afford it. Previous lockdowns have already shattered the economy, thrown millions out of work and left many families hungry.

Mayors in the national capital region, which is made up of 16 cities and one municipality, had reportedly backed stay-at-home orders if the national government provided assistance to residents.

The national capital region, also known as Metro Manila, and surrounding provinces were last locked down in March as record infections pushed hospitals to their limit.

As new cases eased earlier this month, the government lifted a ban on children aged five to 17 going outdoors for the first time since the start of the pandemic.

But two weeks later it reimposed the stay-at-home order as authorities confirmed local transmission of Delta.

The tougher restrictions come as the country struggles to vaccinate its population due to tight global supplies and logistical challenges. Only 7.8 million people — or seven percent of the population — have received two jabs.