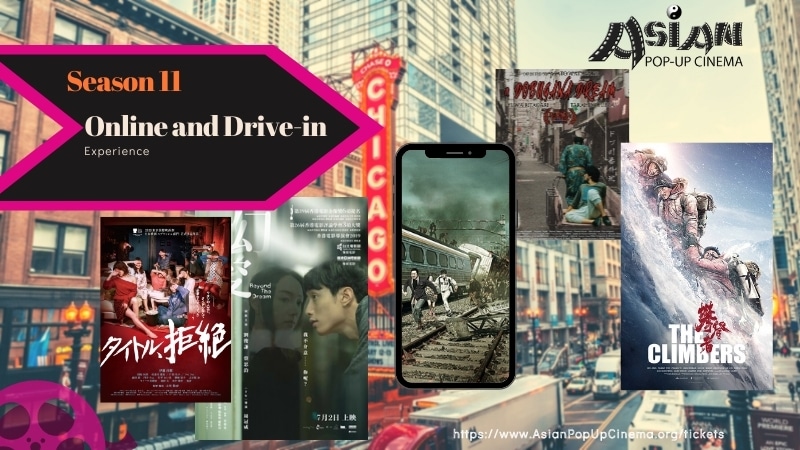 Asian Pop-Up Cinema proves their strong dedication to movie buffs despite the pandemic by launching new ways of showcasing their impressive 22-movie lineup including the Drive-in Cinema and online streaming.

Almost every festival in the world has been affected by the pandemic, but movie fans don’t need to be worried because Asian Pop-Up Cinema won’t let COVID-19 deter them. The Chicago festival is celebrating its 5th anniversary with its first joint virtual and drive-in showing that will run from September 10 to October 10, plus a highly-anticipated Halloween drive-in on October 30 to 31.

This year’s list of films is one of the festival’s strongest lineups yet. Aside from several North American premieres, Asian Pop-Up Cinema will also feature 15 international film premieres that will be available online and restricted for US territory viewing only. This was done in partnership with Festival Scope, the leading online film festival platform in Europe. The annual theme “Movie with Mooncakes” will still be followed.

Just like the previous years, the Asian Pop-Up Cinema line-up was meticulously selected by Sophie Wong, the festival founder and director. Notably, Wong went the extra mile this year to look for an exciting lineup that would boost the viewer’s morale during this pandemic.

According to Wong, “with most film festivals going completely virtual in 2020, Asian Pop-Up Cinema will host a special CDC-compliant drive-in program (in addition to streaming movies) to remind us of the fun of watching films on a big screen with a live audience.”

The festival is continuing to deliver its mission to be the passport of people to Asian Cinema by offering them an experience they can enjoy from the comfort and safety of their homes.

Additionally, Asian Pop Up Cinema will be celebrating Filipino American History Month, and to honor this, there will be a fundraiser for the Filipino Young Leaders Program which will benefit the healthcare staff working on the frontline.

The two drive-in screenings for Halloween would be a double-feature of internationally acclaimed Korean director Yeon Sang-ho, the brilliant mind behind Train to Busan and its equally-terrifying sequel, Peninsula.

One of the most anticipated parts of the festival is the pre-recorded “Filmmaker Talks” feature which will be included in the majority feature presentation. The questionnaire was provided by Virtual moderators Kevin Ma in Hong Kong, Mark Schilling in Japan, and Ron Falzone in Chicago.

Whether you choose to participate in the drive-in or online showing, you can expect amazing releases from top movie distributors in the industry. The opening drive-in film is South-Korean movie Paper Flower directed by Koh Hoon. The said film stars one of the country’s leading male actors, Ahn Sung-ki, whose performance was honored with the Season 11 Career Achievement Award. The actor also prepared a video presentation that will be shown before the screening.

The film Diaspora: Arirang Road will also be internationally premiered during the festival. The musical documentary focuses on the famous song and will show how it inspired Koreans for the last century and a half.

Meanwhile, Hong Kong’s Beyond the Dream starring Terrance Lau will be the festival’s closing night film. The romantic psychodrama is the first one made in the region. Lau was critically praised for his performance as a schizophrenic who wants to experience love.

According to Wong, Season 11 will include a large selection of rarely shown documentaries to nurture our audience with a strong dose of pure beauty for the first time. These films will be cinematic and humanitarian. Some of the documentaries that will be showcased in the festival are Water with Life, Formosan B.B. Is Coming, Whale Island, Walking Dharma, and Tsunma, Tsunma: My Summer with the Female Monastics of the Himalaya, which are all from Taiwan.

Other films you should not miss are Happy-Go-Lucky Day, Life: Untitled, A Dobugawa Dream, Life Finds A Way, All About ING, Edward, The Climbers, My Prince Edward, and A Touch of Spring.

Did we mention the first Drive-in screening for ‘The Climbers’ is FREE? Whether you are in Chicago or not, Sophia’s Asian Pop Up cinema has got you covered.  Get info here.