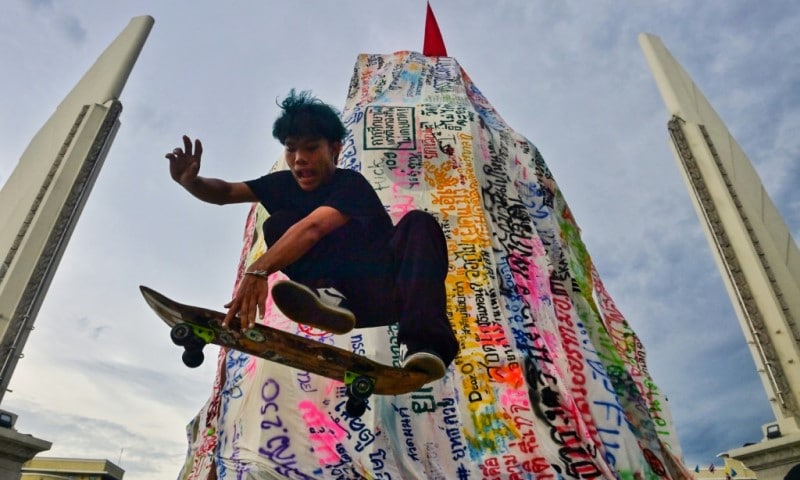 Kickflipping Thai skateboarders are flipping the bird at authorities, joining pro-democracy rallies in Bangkok to vent their anger

Kickflipping Thai skateboarders are flipping the bird at authorities, joining pro-democracy rallies in Bangkok to vent their anger over a lack of respect and dedicated public space for extreme sports in the kingdom.

A youth-led pro-democracy movement kicked off in Thailand in July last year, demanding reforms to the monarchy, a rewrite of the military-scripted constitution and the resignation of Prime Minister Prayut Chan-O-cha.

A deadly third coronavirus wave and the detention of protest leaders sucked much momentum from the movement this year, but there have been near-daily small-scale rallies since June.

The sluggish rollout of Thailand’s vaccination program, and the financial pain from restrictions has heaped political pressure on Prayut’s government. 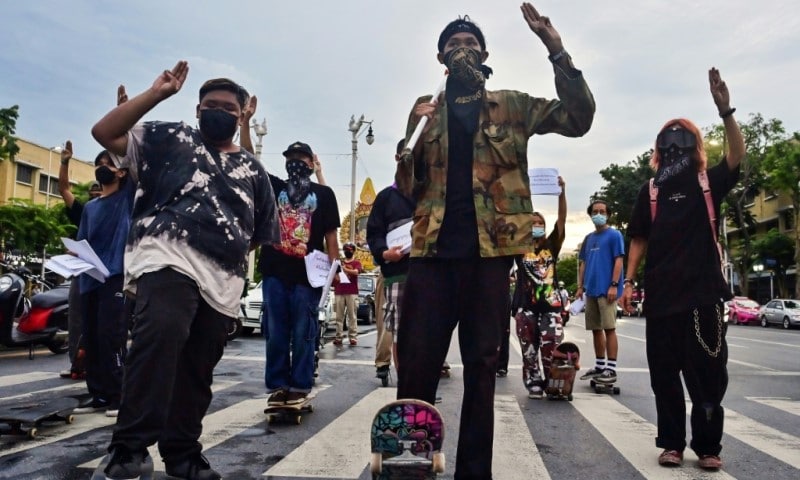 During a recent demonstration at the Democracy Monument — a major intersection in Bangkok — groups of skaters slid over metal bars and benches while others scaled the central part of the monument to drape a giant cloth banner with anti-government messages.

Nattakarn Tewarit, 17, says he and his fellow skaters are unfairly maligned as troublemakers and deserve greater respect after the sport was included in the recent Tokyo Olympic Games for the first time.

“We see skateboarders being shooed away by police and security guards,” he told AFP, adding that building new skateparks would mean fewer collisions with pedestrians in public spaces.

“Normal protesters use their voices as a tool against the government but we use skateboards — they are our weapon.”

Fellow skater Thana, 19, is upset about the government’s handling of the coronavirus outbreak and says most skateboarders are working-class youngsters whose families have been hit hardest by the pandemic and restrictions.

New cases on Wednesday tallied close to 12,000 after hitting a peak of 23,000 infections a day last month — but testing rates have also declined.

The closure of Bangkok’s few dedicated skateparks, as part of restrictions, has also had an impact on the community. 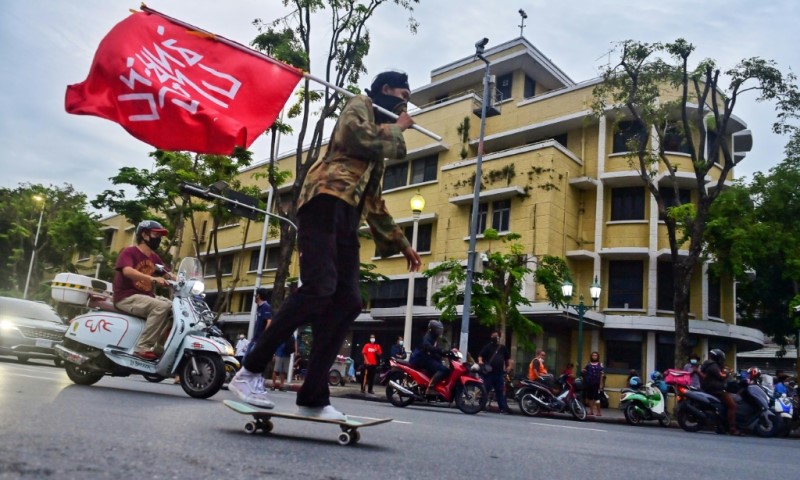 A skateboarder rides with a flag that reads, ‘Prayut Get Out’ during an anti-government protest in Bangkok

“It’s where lost souls come together,” Thana told AFP, adding the hobby had helped many of his friends cope with depression.

“It’s more than just a sport.”

Ice, 18, says the protest allows her friends to express their creativity.

“When we skate across the mock-up dead bodies with the face of General Prayut… we want to express our anger and disapproval against the government,” she told AFP.