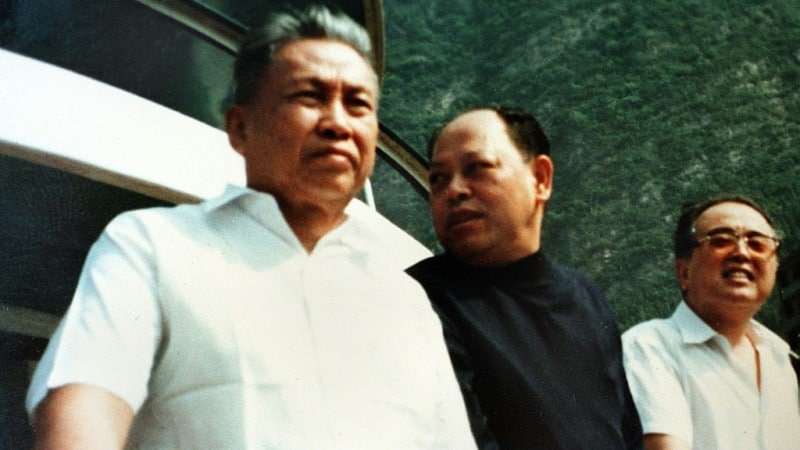 An undated photo of Khmer Rouge leader Pol Pot (left) with former regime foreign minister Ieng Sary (centre) recovered from their Anlong Veng stronghold by Agence France Press reporter Reach Sambath in 1998. The picture was believed to have been taken in China in the late 1970s

The former teacher ran a notorious prison for the regime, overseeing the deaths of some 15,000 people — a fraction of the estimated two million who died.

Here’s what we know about the Khmer Rouge. 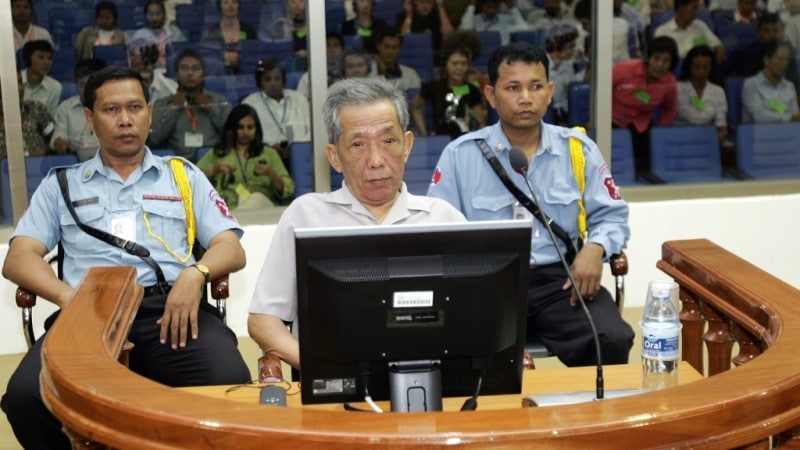 The ultra-Maoist Khmer Rouge ruled Cambodia from 1975 to 1979 under the leadership of “Brother Number One” Pol Pot — a charismatic intellectual who studied in France.

Today Pol Pot’s name is synonymous with terror and genocide, and his bid to create an agrarian utopia is blamed for the deaths of some two million Cambodians.

The movement started in the northeastern jungles of the kingdom, where Pol Pot recruited supporters and waged guerilla warfare against the repressive governments of Cambodia of the time.

On April 17, 1975, Khmer Rouge troops marched into Phnom Penh, toppling the dictatorship of General Lon Nol — who had staged a coup against then-Prince Norodom Sihanouk.

Millions of Phnom Penh residents were evacuated to the countryside, separating families into communes across the country. 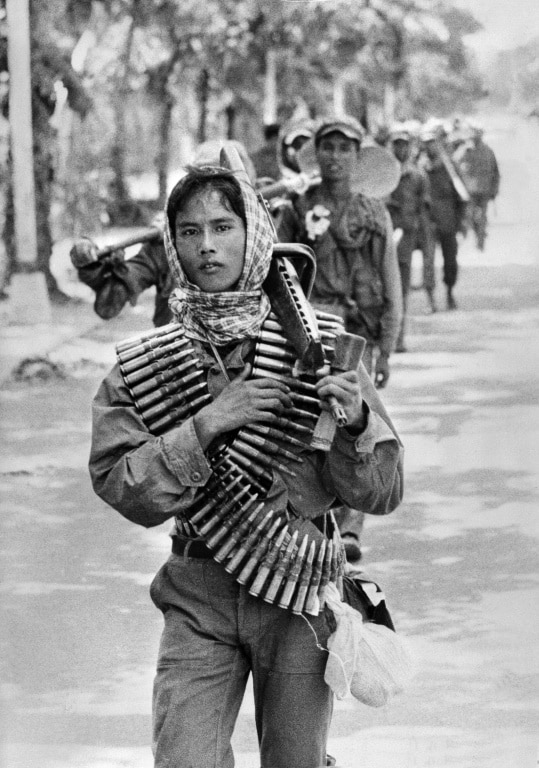 A Khmer Rouge soldier enters Phnom Penh on April 17, 1975, the day capital fell under the control of the regime

What did They do?

The Khmer Rouge demanded unquestioning loyalty to “Angkar” – which translates to “the organization” in Khmer, and any ties to family or friends deemed “impure” was dangerous.

Even Cambodians’ deep religious devotion to Buddhism was regarded with suspicion by cadres, who defrocked monks and defaced temples across the kingdom.

In the name of Angkar, Cambodians were forced to toil in rice fields under extreme conditions, work in factories and oversee the mass executions of those considered “impure”.

Intellectuals, former civil servants and members of the police and armed forces often fell into this category, while ethnic minorities — including Vietnamese and Cham Muslims — were also systematically targeted.

Towards the end of the regime, the Khmer Rouge devoured its own with repeated purges — driven by paranoia from the leadership that the revolution’s enemies were hidden within. 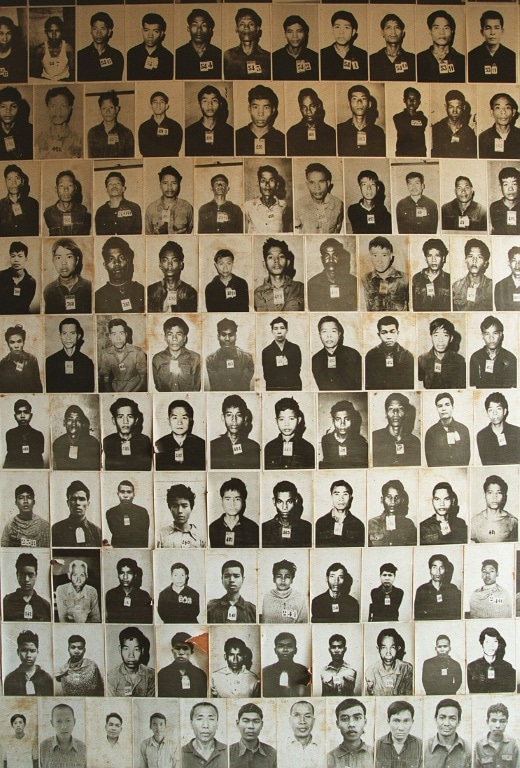 Photographs of victims of the “Killing Fields” displayed at the genocide museum in Toul Sleng a former school, turned into a torture camp by the Khmer Rouge

The regime’s biggest backer was China, who pledged a billion dollars in aid to Pol Pot, according to Sebastian Strangio, author of “In the Dragon’s Shadow” and “Hun Sen’s Cambodia”.

The US also indirectly helped to bolster the ranks of the Khmer Rouge, as carpet-bombings in Vietnam, Cambodia and Laos bred resentment among locals against the Western superpower.

After the Khmer Rouge was ousted by Vietnamese-backed troops in 1979 it received some backing from the US, which saw them as a check on communist Hanoi. 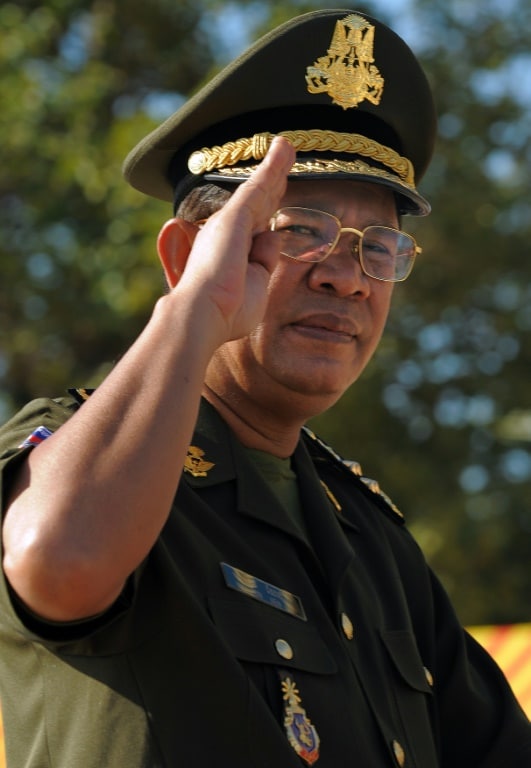 What was the Role of Now-Premier Hun Sen?

Asia’s longest-serving leader Hun Sen rose through the ranks of the Khmer Rouge to become battalion commander before fleeing the country for Vietnam in 1977 to escape one of the many internal purges.

Local history books play down the role he played during the Khmer Rouge’s rule, but credit him with leading Vietnamese troops into the country to oust Pol Pot from power in January 1979.

Attempts to investigate the role of other individuals has been restricted by the current government, which contains several former Khmer Rouge members.

Hun Sen has said he wanted a UN-backed tribunal to only investigate the regime’s top echelon. 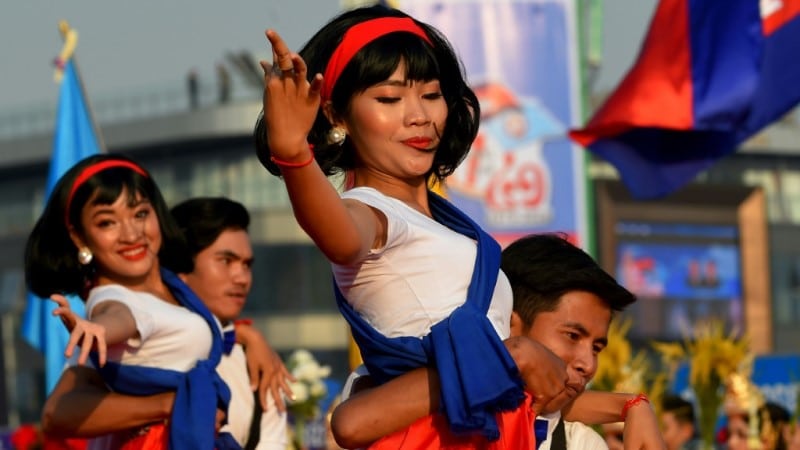 What Justice has There Been

Launched in 2006, the tribunal – which costs hundreds of millions of dollars — has so far convicted just three people.

Duch was the first member of the Khmer Rouge to face judgment and his testimony revealed aspects of the secretive regime that was never known to the public.

He was sentenced to life imprisonment in 2012.

The other two convicted were Nuon Chea, “Brother Number Two” and chief ideologue of the regime — who died last year — and Khieu Samphan, the former head of state who served as the Khmer Rouge’s public face to the world.

Critics have castigated interference by the government and the pace of proceedings.

Judicial processes are “complex, politicised, and in many ways doomed to fail”, said Robert Carmichael, author of “When The Clouds Fell From the Sky”, which chronicles Duch’s trial.

But his trial and conviction “were viewed as beneficial” because of the details revealed about regime, he stated.