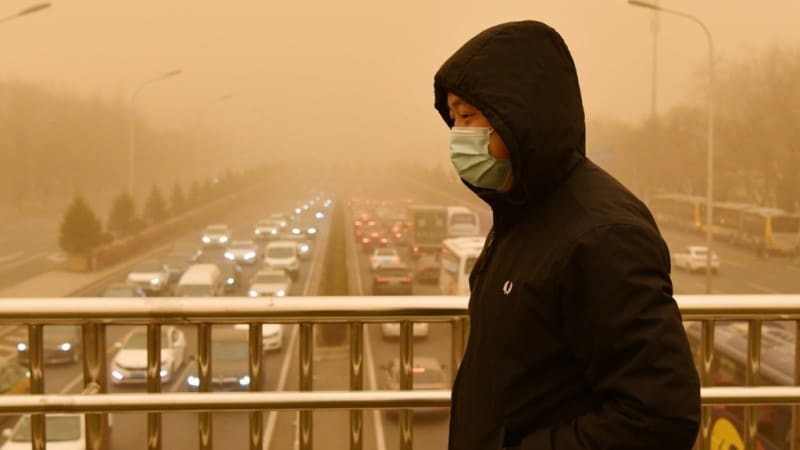 Beijing was cloaked in thick yellow smog on Monday with pollution levels surging off the charts as the worst sandstorm in a decade descended on China’s capital from the Gobi desert.

City residents used goggles, masks and hairnets to protect themselves from the choking dust and sand, with landmarks including the Forbidden City partly obscured behind an apocalyptic-looking haze.

The city government ordered schools to cancel outside sport and events and advised the public to stay inside where possible, as hundreds of flights were canceled.

Chinese weather agencies blamed the poor air quality on a sandstorm sweeping across northern China from northern Mongolia, where authorities there said it had left several dead, before being carried south by winds and reducing visibility in Beijing to less than 500 meters. 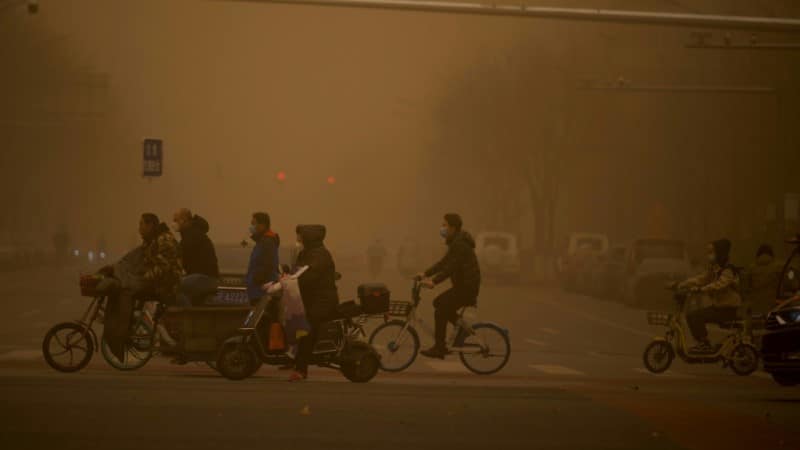 Beijing residents used goggles, masks and hairnets to protect themselves from the choking dust and sand

Under heavy skies, which draped buildings in an eerie glow, Beijing residents fretted over the health risks of a storm which compounded days of hazardous PM 2.5 pollution in the capital.

“I feel every breath will give me lung problems,” Beijing resident Zhang Yunya told AFP.

It was the worst sandstorm in a decade to hit a capital, which had pegged its hopes of rebuilding a natural barrier to such phenomena on intensive tree replanting in stripped forest areas, also known as the “green great wall”.

Beijing said last year it expected fewer and weaker sandstorms to hit northern China due to its reforestation efforts.

A 2019 study published in the journal Nature Sustainability found some two million square miles of vegetation had been added to the surface of the earth since 2000, a quarter of which was contributed by China.

But the impact of those greenbelts is disputed against the prevailing desertification of the country’s northwest.

Pan Xiaochuan, a Beijing-based environmental health expert, told AFP that the lack of recent rain or snow meant the ground was extra dry and made the sandstorm “very fierce.”

“If there is less moisture, more dust will be scraped up,” he said. “Since the sandstorm is blown from a high altitude, the general windbreak tree belts won’t be very effective, so it has been blown over … very quickly.”

Sandstorms blowing into the capital are a result of extreme weather conditions and desertification, said Li Shuo of Greenpeace China.

But he told AFP that “intense” industrial activities had also contributed to bad air in Beijing over recent weeks, with the production of steel, cement and aluminium already overtaking pre-pandemic levels as the economy bounces back into action. 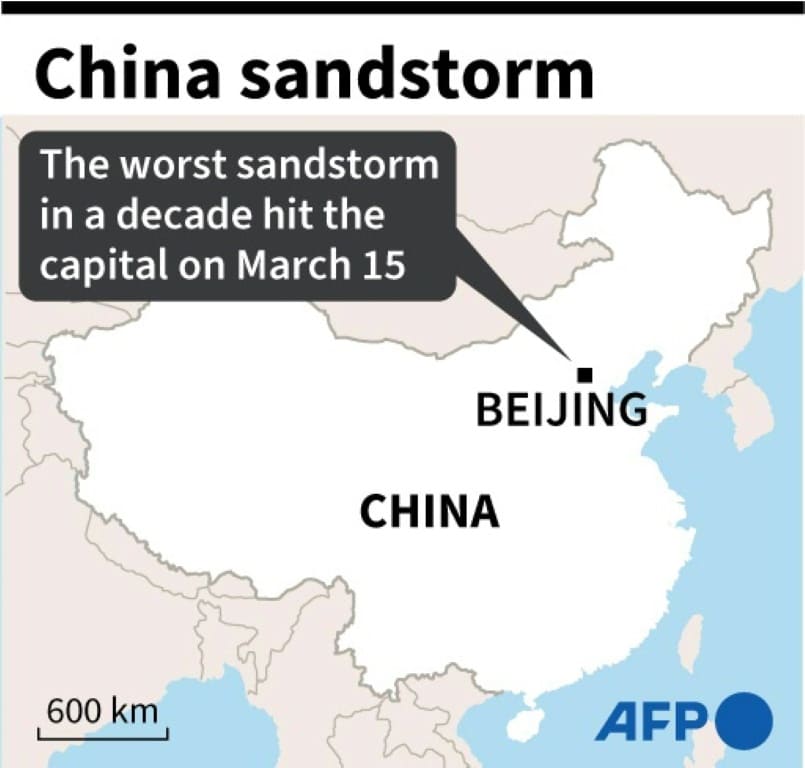 Map of China locating Beijing which on Monday was hit by the worst sandstorm in a decade.

Discussion of the orange haze lit up online discussions — with 230 million views on social media platform Weibo by Monday afternoon.

“This orange red sandstorm makes it looks like the end of the world,” said one Weibo user.

Pollution in the city was at “hazardous” levels, according to air quality monitoring website Aqicn, as the reading soared off the scale for many apps.

But the state-run Global Times said PM 10 pollution in the six downtown districts was “over 8,100” on Monday morning — a figure which would be 160 times the recommended limit. 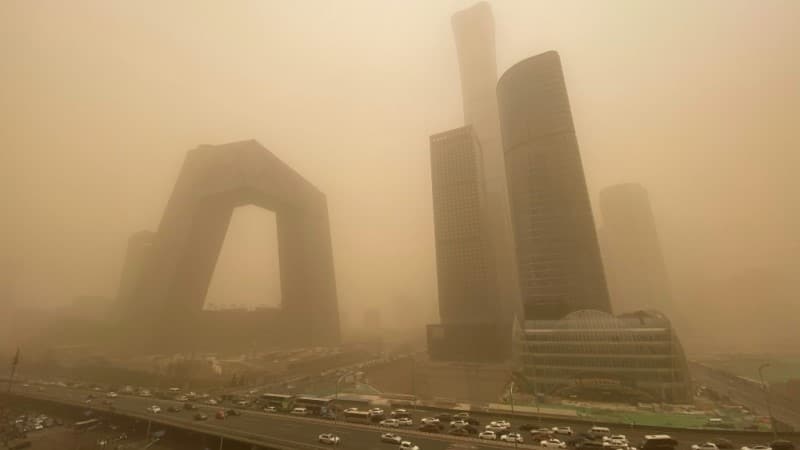 The poor air quality was due to a sandstorm from northern Mongolia, according to state media

Smaller PM 2.5 particles, which seep deep into human lungs and cause respiratory illnesses, were also at a hazardous level on Monday morning.

China cut its national average level of airborne PM 2.5 dramatically between 2015 and 2019 and the government has announced an ambitious target to reach carbon neutrality by 2060.

“It’s hard to claim we are moving forward when you can’t see what’s in front,” he tweeted.