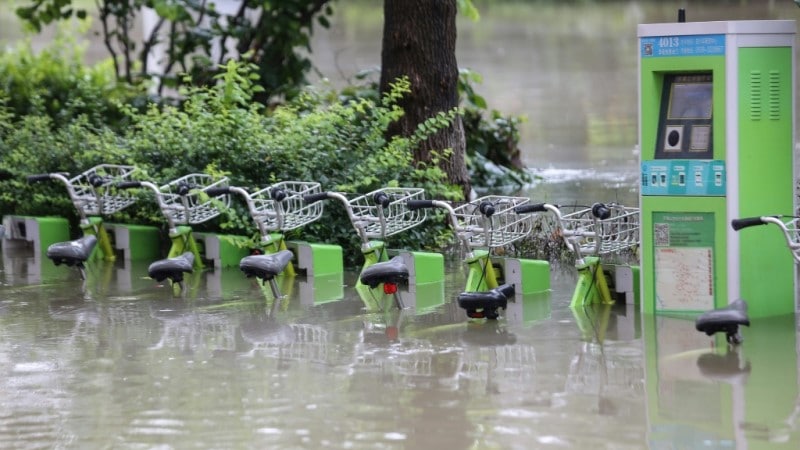 Seasonal floods in China have been particularly bad this year

Firefighters in lifejackets waded through chest-high water to rescue around 20 dogs trapped at a pet hospital in southwest China’s Sichuan province as heavy rain and flooding doused the region.

Hospital employees and their canine wards were trapped in the clinic in Chengdu city Sunday after water rose up to the building’s second floor, state broadcaster CCTV reported.

But rescuers lifted the dogs onto bright orange rafts to ferry them across the muddy water — with one small mutt making the journey in a green recycling bin.

All humans and animals trapped in the hospital were eventually taken to safety after six hours of work, rescuers said.

Summer flooding has been an annual scourge since ancient times, typically focused in the vast and heavily populated Yangtze basin that drains central China.

Rising waters across central and eastern China this year have left over 210 people dead or missing, and floods have destroyed 54,000 homes, according to China’s Ministry of Emergency Management.

Video broadcast by Chinese state-run media in July showed cities and towns inundated by water that rose in some places to the roofs of single-story homes, as rescue personnel evacuated men, women and children aboard inflatable boats.

Sichuan on Monday raised its flood alert to the second-highest level after continuous heavy rain since Saturday damaged farmland and transport infrastructure, according to the official Xinhua News Agency.