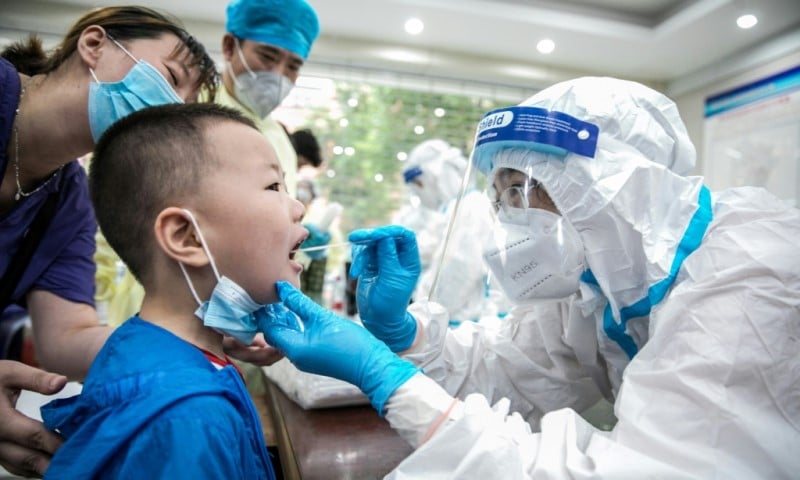 However there had been no new infections in many hotspots in recent days owing to stringent virus control measures, they added.

“Of these 48 cities, 36 have not reported any new infections in the past five consecutive days,” Chinese Center for Disease Control and Prevention official He Qinghua told reporters.

“In these circumstances, the risk of a nationwide outbreak is generally controllable and there is relatively little risk of a large-scale outbreak occurring on the national scale.”

State media has described the current outbreak — which has sparked local lockdowns, mass testing and travel restrictions — as the most severe since the virus first emerged in the central city of Wuhan.

More than half of China’s population, 777 million people, have been fully inoculated so far, with over 1.83 billion doses administered nationwide, a National Health Commission spokesman announced Friday.

China has also strengthened anti-virus controls for international flights and cargo shipments in response to the latest outbreak.

“According to the results of genetic sequencing, the sources of infection are all from overseas,” said He.

One terminal of Ningbo-Zhoushan port, the world’s third-biggest by cargo volume, suspended operations Wednesday after a worker tested positive.

The latest outbreak emerged in mid-July in the eastern city of Nanjing, after nine airport cleaners tested positive for the virus.

Dozens of local officials have since been punished for mishandling the outbreak, as Beijing scrambled to contain the spread of domestic transmissions.

China reported 99 new cases Friday, 47 of which were local transmissions — down from a seven-month high of 108 local infections announced Tuesday.

Several cases in recent days have been linked to a Covid-19 testing site and mahjong parlours in eastern Yangzhou city, home to 4.6 million people.