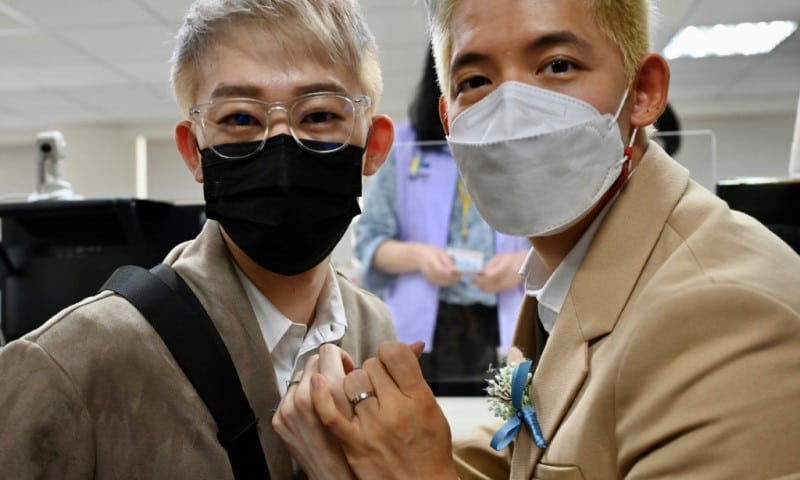 ​’We’ve waited for two years and finally we can get married,’ Ting Tse-yen (left) said

A Taiwanese-Macanese gay couple tied the knot in Taipei on Friday after winning a landmark legal case as they called for the island to amend its laws to allow same-sex unions with all foreigners.

Taiwan is at the vanguard of the burgeoning LGBTQ rights movement in Asia and became the first place in the region to legalise marriage equality in 2019 — but there are still restrictions that same-sex couples face.

Taiwanese people can marry foreigners of the same sex, for example, but only those from countries where marriage equality is also upheld.

Ting Tse-yen and his partner Leong Chin-fai from Macau challenged that restriction in court earlier this year and won, allowing them to officially register their marriage on Friday. 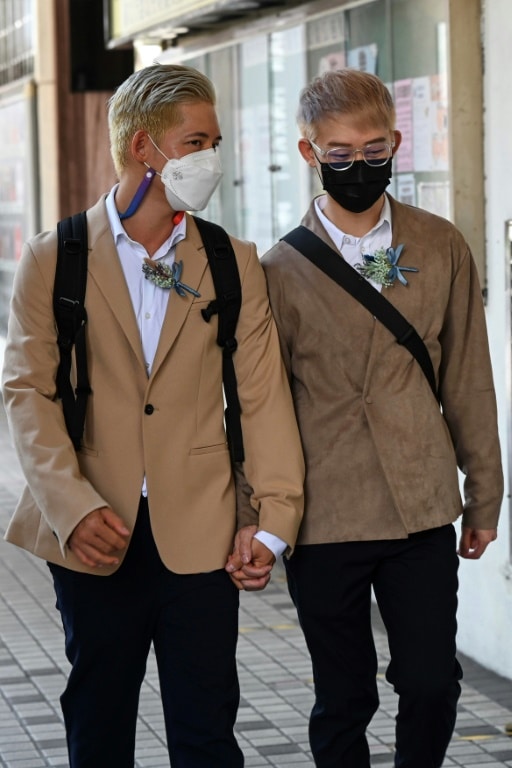 But the ruling only applies to them, and other same-sex couples wanting to marry will have to launch the same legal fight.

“This is an initial success. Other international couples still can’t marry and we call for full recognition,” 29-year-old Ting said.

“We hope our registration today will let the government see that marriage equality has yet to be realized,” said Leong, 33.

The couple were able to wed because a court in May ordered a government office to record a same-sex marriage with a foreigner from a place where such unions are not recognized — overturning its 2019 rejection of their marriage registration.

“We’ve waited for two years and finally we can get married,” Ting said after the registration, showing his brand new ID card with his spouse’s name on it.

The couple have co-founded a group to help more than 100 Taiwanese whose partners are from countries where same-sex marriage is not legal, including China, Japan, Thailand, and Vietnam.

“Marriage is a basic human right and it’s unimaginable that there is discriminatory treatment because one’s partner comes from a certain country,” the couple’s lawyer Victoria Hsu said.

“Can any heterosexual citizens accept if they are allowed to wed an American but not a Japanese?”

Hsu’s advocacy group the Taiwan Alliance to Promote Civil Partnership Rights has appealed to top government watchdog Control Yuan to look into the issue, she said.

Taiwan is home to a thriving LGBTQ community and a record 200,000 people attended a pride march in Taipei in 2019 to celebrate the legalisation of same-sex marriage.

Nearly 6,000 same-sex couples have wed since then.

That law came about after Taiwan’s top court ruled that denying same-sex couples the right to marry was discriminatory and unconstitutional.

But same-sex marriage proved deeply divisive and the law contains restrictions pushed for by conservatives, including limited adoption rights.