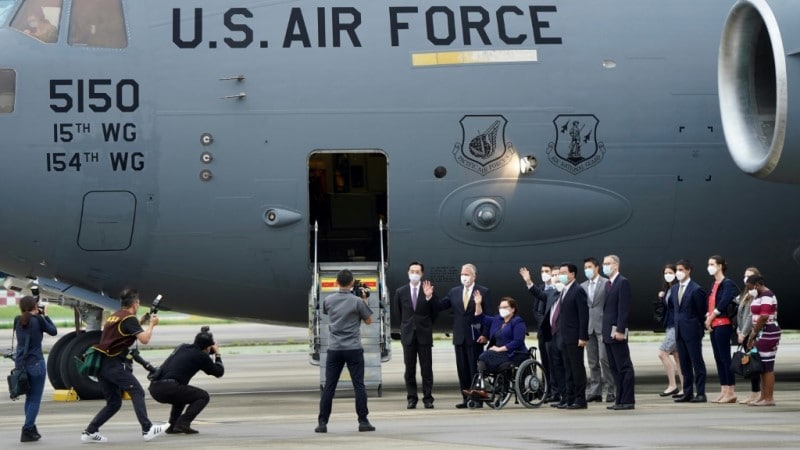 Beijing sees democratic, self-ruled Taiwan as part of its territory which is to be seized one day, by force if necessary, and rages at any diplomatic attempts to recognise it as an independent nation.

A delegation of three US lawmakers made a stopover on Sunday in Taipei, where they announced Washington would donate 750,000 coronavirus vaccine doses to Taiwan.

The gift came as Taiwan accuses China of hampering its efforts to secure vaccines, saying it is part of Beijing’s ongoing campaign to isolate the island.

He also urged the United States to “be prudent when dealing with the Taiwan question and avoid sending any erroneous signals to separatist forces” on the island.

But the relatively tepid statement from a ministry notorious for its pugnacious responses to any diplomatic overtures to Taiwan awoke the scorn of China’s online patriots.

“Saying that is the same as saying nothing, I’m sick of it,” one Weibo user commented Monday on a post by state-run tabloid Global Times about Wang’s statement.

“You should send two fighter jets to escort them!” another user urged.

China’s diplomats and official propaganda have in recent years encouraged an assertive, belligerent form of nationalism, with officials tweeting insults and conspiracy theories about diplomatic rivals and state TV gloating at the chaos caused by protests and coronavirus outbreaks abroad.

After years of increasingly bellicose language, President Xi Jinping last week called for a change in tone from China.

He urged the nation to show a softer face abroad, cultivating a “reliable, admirable and respectable image”.