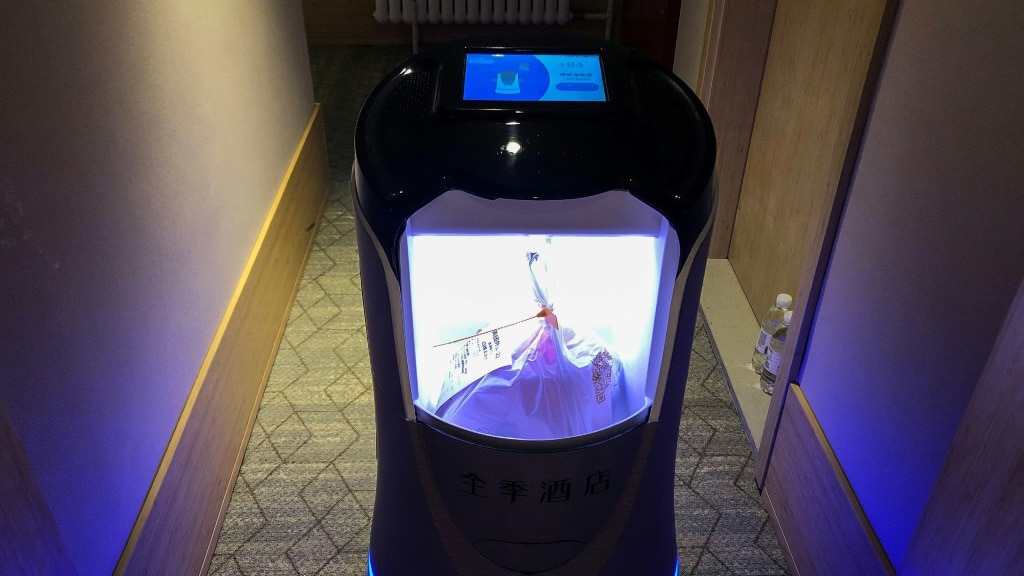 Authorities have taken drastic steps to ensure that people do not break isolation rules after China largely tamed the virus that had paralyzed the country for months.

With cases imported from abroad threatening to unravel China’s progress, travelers arriving from overseas have been required to stay home or in designated hotels for 14 days.

Beijing loosened the rule in the capital this week — except for those arriving from abroad and Hubei, the province where the virus first surfaced late last year.

At one quarantine hotel in central Beijing, a guard sits at a desk on each floor to monitor all movements.

The solitude is broken by one of the few visitors allowed near the rooms: A three-foot-tall cylindrical robot that delivers water bottles, meals and packages to hotel guests. 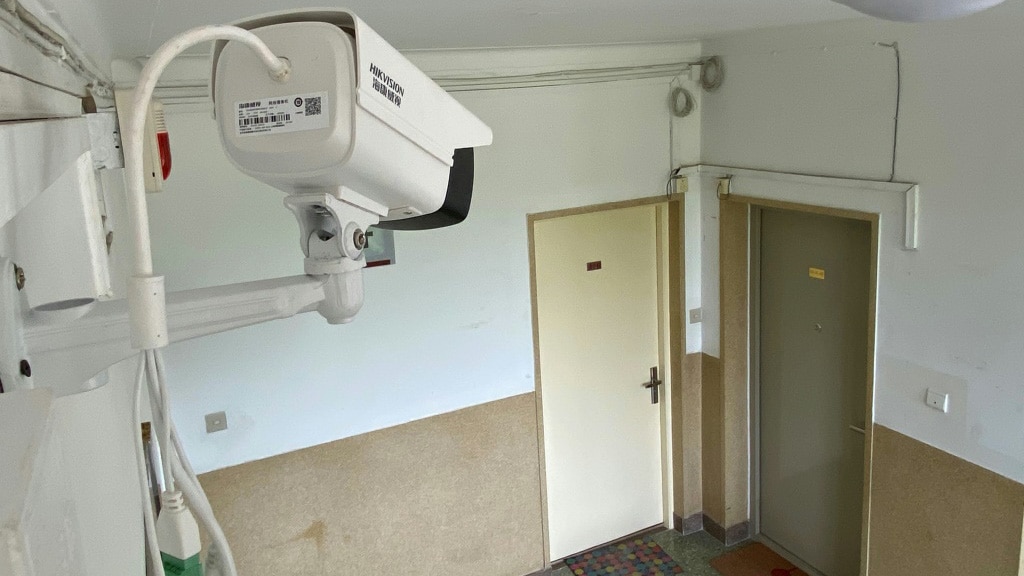 The robot rides the elevator and navigates hallways on its own to minimize contact between guests and human staff.

When the robot arrives at its destination, it dials the landline phone in the room and informs the occupant in an eerie, childlike voice: “Hello, this is your service robot. Your order has arrived outside your room.”

Its belly opens and the guest takes the delivery items before the robot turns and rolls away.

Doctors in hazmat suits go from room to room daily reminding occupants, including an AFP journalist who had been in Hubei, to take their temperatures with the mercury thermometer provided at check-in, and to ask if any are experiencing symptoms.

People under home quarantine elsewhere in the city have had silent electronic alarms installed on their doors.

Officials put up a notice on each quarantined household’s door asking neighbors to keep an eye on the confined inhabitants. 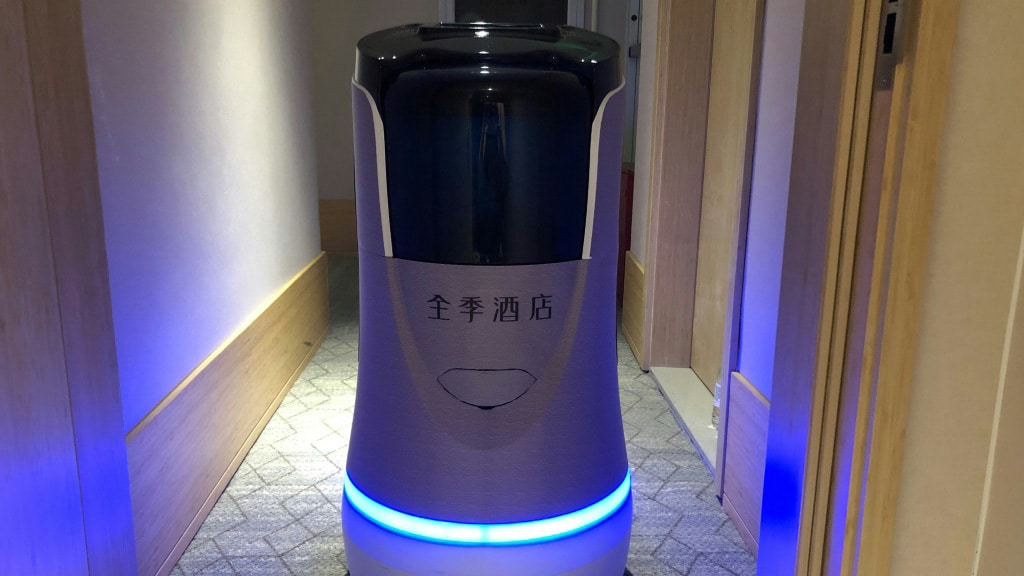 Robots are helping care for coronavirus patients in isolation

In one Beijing residential compound, officials told AFP that people under home quarantine must inform community volunteers whenever they open their doors.

Friederike Boege, a German journalist, began her second quarantine in Beijing this year on Sunday after returning from Hubei’s capital Wuhan.

Her building’s management installed a camera in front of her door to monitor her movements.

“It’s quite scary how you get used to such things,” she told AFP.

“Apart from the camera I do believe that the guards and the cleaner on the compound would denunciate me if I were to go out,” Boege said.

During her previous quarantine experience in March after returning from a trip to Thailand, she was reported to building management by a cleaner for going downstairs to take out the trash. 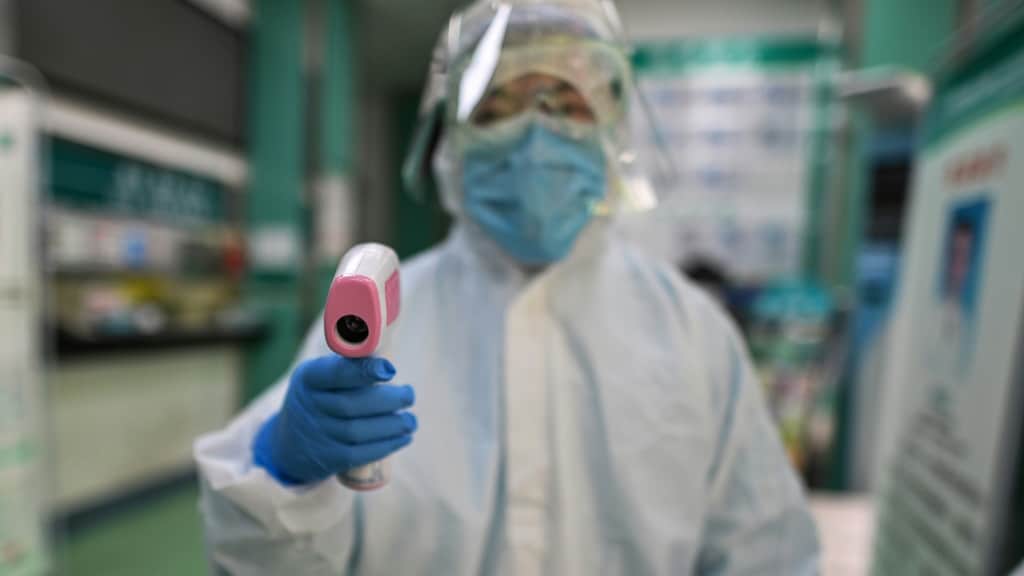 With cases imported from abroad threatening to unravel China’s progress, travelers arriving from overseas have been required to stay home or in designated hotels for 14 days

Total isolation has become a temporary norm for those under strict quarantine, without even a single trip to the grocery store or walk to break up the monotony.

Joy Zhong, a 25-year-old media professional returning to Beijing from a work trip in the virus epicenter of Wuhan, spent three weeks without leaving a cramped room at another hotel in the Chinese capital.

There, guests were not allowed to order their own food and were instead given standardized meals.

Friends were allowed to bring packages to the front desk, which were then left outside hotel rooms by staff who avoided direct contact with guests.

“Spending 21 days in a row without seeing a single person, it felt like time was passing extremely slowly,” Zhong told AFP.

Not all people under quarantine are as closely watched as those in Beijing, however.

Charlotte Poirot, a French teacher who arrived in China in late March — just before a ban on foreigners entering the country was introduced — spent two weeks under quarantine at a hostel in the southeastern city Guangzhou.

She was confined alone in a 10-bunk room, with meals delivered to her door and medical personnel coming to check her temperature multiple times a day.

“They never locked the door and the (whole) process was based on reliance,” Poirot told AFP. “We all played the game without contesting.”