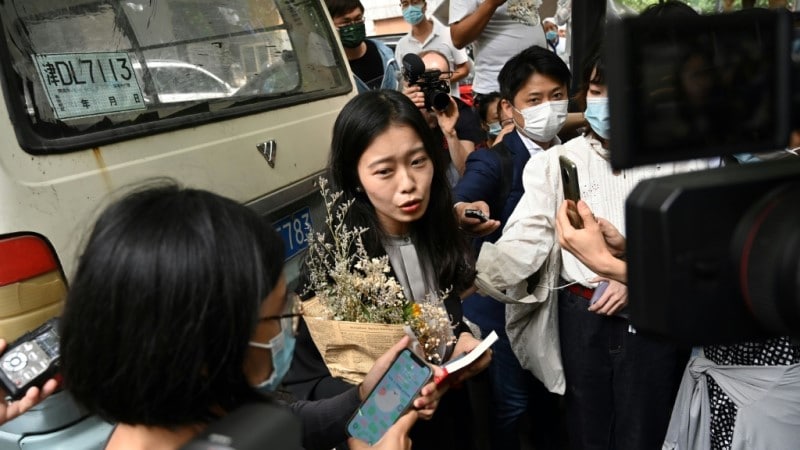 The sexual harassment case of Zhou Xiaoxuan (C), who accused former former state TV host Zhu Jun of forcibly kissing and groping her during a 2014 internship, has been thrown out – a blow to China’s #MeToo movement

A Chinese court on Tuesday threw out a landmark sexual harassment case on the basis of insufficient evidence, in a blow to the country’s fledgling #MeToo movement.

Zhou Xiaoxuan, now 28, came forward in 2018 to accuse former state TV host Zhu Jun of forcibly kissing and groping her during her 2014 internship at the broadcaster.

Her claims ignited a social media storm and inspired many women to share their experiences of sexual assault publicly.

But after a three-year legal battle, the court ruled there was not enough evidence to proceed.

“The evidence provided by the plaintiff Zhou was insufficient to prove her argument that she was sexually harassed by the defendant Zhu,” Beijing Haidian District People’s Court said in a statement late Tuesday, adding that the case would not proceed to trial.

Zhou’s case against Zhu was originally filed under the “personality rights” law — covering rights relating to an individual’s health and body — but her lawyers later asked for it to be considered under new sexual harassment legislation that was passed last year.

Despite the new law, many women in China are still reluctant to come forward with harassment charges, and it is rare for cases to make it to court.

“No matter whether I win or lose, I am very honored to have experienced these three years… with everyone,” Zhou told supporters and media on her way into the Beijing court.

Her first hearing in December drew a large crowd and a significant police presence with reporters from several foreign media outlets, including AFP, dragged away by police.

On Tuesday, police had cordoned off the road outside the court.

Zhu did not attend either hearing.

“I hope that, no matter what, Xianzi knows that she has done something very meaningful,” said one supporter outside the court, who identified herself only as Lucy.

Beijing has increasingly tightened the space for civil society, and China’s #MeToo movement has been restrained by online censorship.

Zhou’s own Weibo account has been blocked, while several prominent women’s rights accounts appeared to have been deleted after sharing posts about the case.

However, several well-known individuals have come under fire over allegations of sexual misconduct, including the former head of the government-run Buddhist association and Chinese-Canadian pop star Kris Wu, who was arrested in Beijing last month on suspicion of rape.