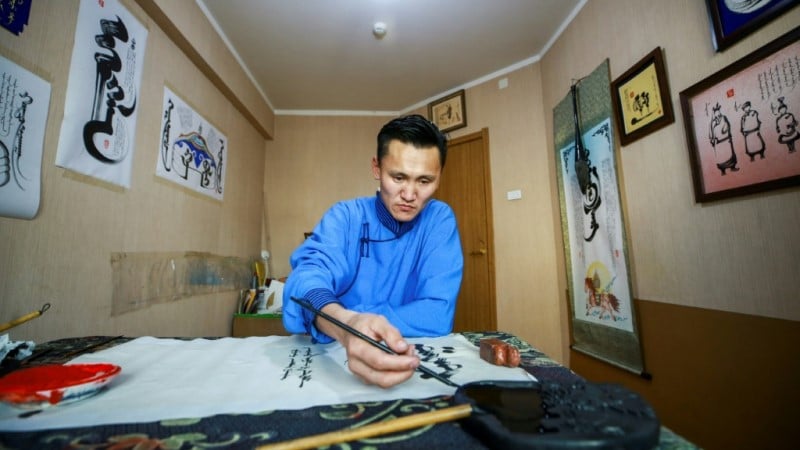 The traditional, vertical Mongolian script is enjoying a revival in Mongolia

In a classroom in Mongolia’s capital, students pass over the Soviet-era Cyrillic alphabet they grew up with and turn their copybooks sideways to practice the traditional, vertical Mongolian script that dates back to the empire of Genghis Khan.

Teacher Batbileg Lkhagvabaatar leads the class, tracing lines of the flowing, dotted characters on a whiteboard and explaining grammar rules to the group of young men and women and a smattering of children.

They are among a growing number inspired to learn the ancient letters after protests by their kinsfolk in China’s Inner Mongolia region against reforms replacing Mongolian with Mandarin as the language of instruction in schools for core classes.

“I was very disappointed to hear what happened to the Inner Mongolians,” said Togtokhjargal Battogtokh, 46, one of the students in the Ulaanbaatar classroom. “It hurt me too.” 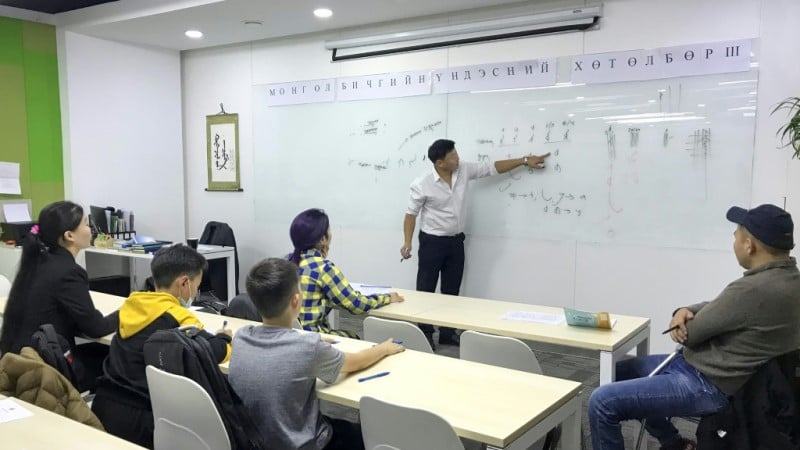 Batbileg Lkhagvabaatar started teaching the script for free in September

“That’s why I want to inspire other people to learn our script.”

Critics of Beijing’s language policy in Inner Mongolia — home to an estimated 4.5 million ethnic Mongolians — say it mirrors moves in other border areas like Xinjiang and Tibet to assimilate local minorities into the dominant Han culture.

Across the border in Mongolia, whose economy is dependent on mineral exports to its giant southern neighbour, they have touched a nerve.

Javkhlan Samand — Mongolia’s most famous country singer — named his most recent concert “Stay Mongolian”, paying tribute to those protesting across the border in authoritarian China.

We Must Care for our Language

Batbileg started teaching the script — also known as Hudum — for free in September after he saw coverage of the protests.

“We live in a fast-changing era of globalization, where people have no time to sit and think about the issue of identity,” he said.

“But now I see from the students that they are thinking more about our national values… they want to promote the Mongolian script which has been used by our people for over a thousand years.”

Mongolia’s government adopted Cyrillic eight decades ago when it was ruled by a Soviet-dominated regime, but now it is also backing the revival of the archaic script that had been left as the preserve of the elderly or language specialists.

The state broadcaster now includes captions in both scripts and the government has said all official announcements will be written in both Cyrillic and Hudum from 2025. 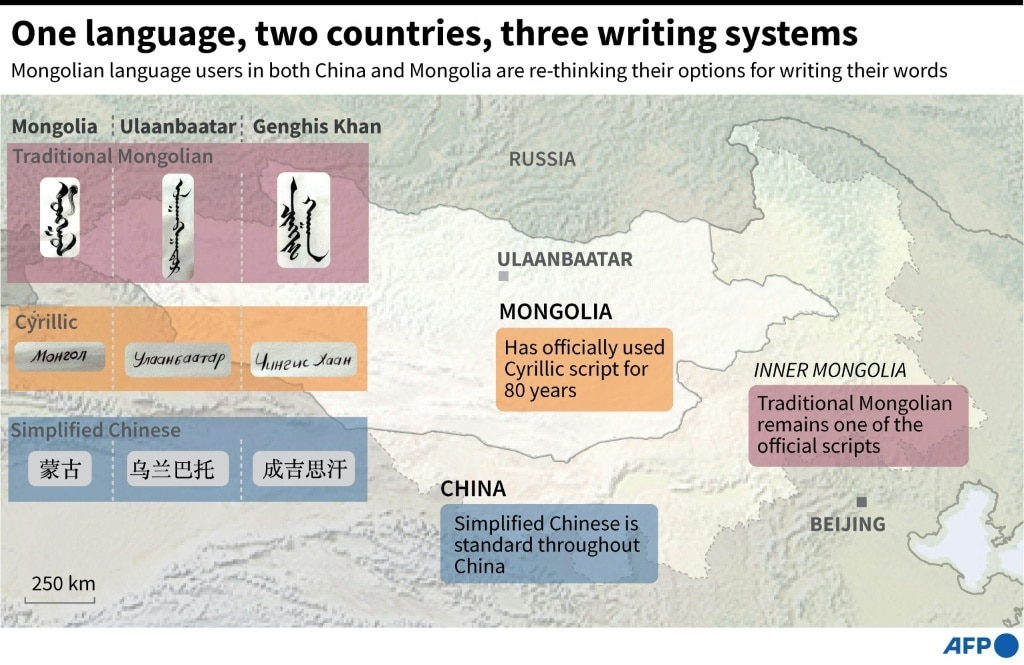 Graphic showing different scripts in use in the country of Mongolia, and the Chinese province of Inner Mongolia.

Even the country’s president — and former sambo wrestling champion — Battulga Khaltmaa has launched his own Hudum lessons on television to encourage citizens to take up the traditional writing.

Mongolians in Mongolia had become “careless about our traditional language”, said Zayabaatar Dalai, head of Mongol Studies at the Mongolian National University.

“Inner Mongolians made us understand how our native language and script is priceless… we must care for our language.” 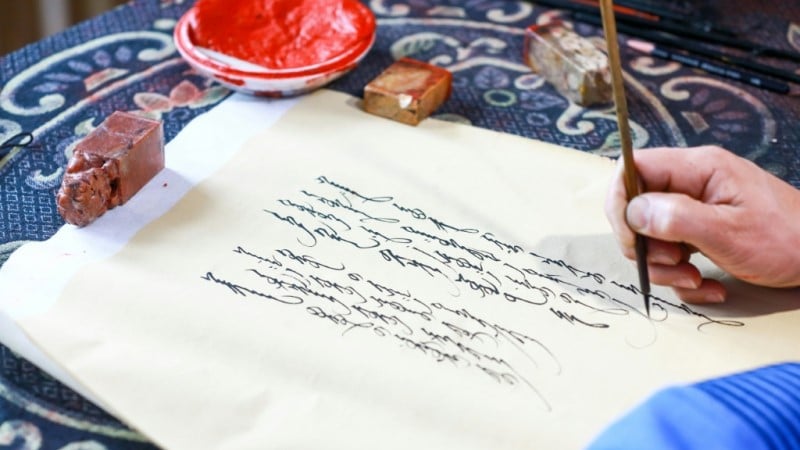 But there are challenges ahead, as much of the script uses archaic language which is not familiar to modern Mongolians, and there have also been grammar changes ushered in by the use of Cyrillic alphabet.

There is no gender in the Hudum script — in contrast to Cyrillic grammar — and in Hudum, words and prepositions are written separately, where Cyrillic merges them together.

School students are currently only required to study the Mongol script for one year, though under the new government plan, textbooks for subjects such as history and literature must also be converted into the traditional script. 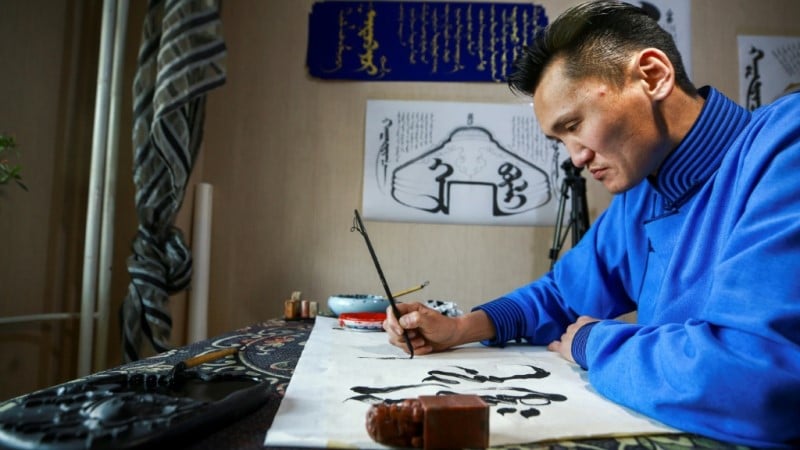 Into the Digital Era

The fresh wave of popularity is also giving Hudum a modern facelift, with activists hoping to make it easier to use on computers and social media — and to help connect ethnic Mongolians spread out across Russia, China and Mongolia.

Another programmer, Ulzii-Orshikh Dashkhuu, said he is creating a social media open platform similar to Facebook, where users can learn and download the vertical script.

“Today we communicate with each other in the digital domain,” he told AFP.

“If we can transfer our vertical writing into digital platforms, we will preserve our traditional language for the next generation.”