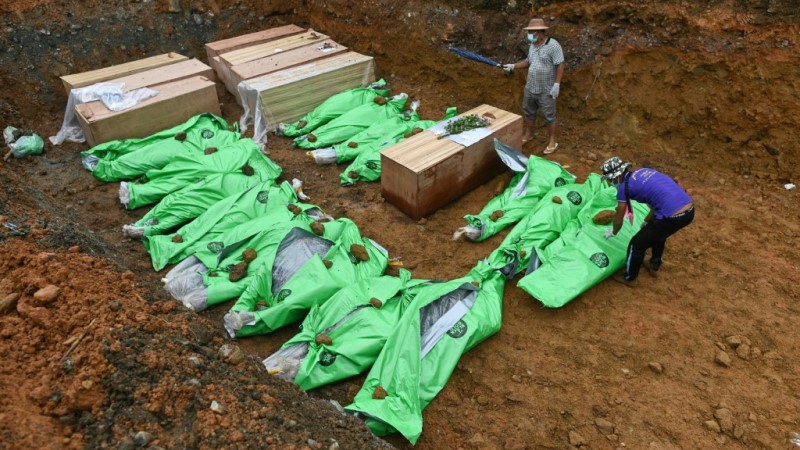 Hundreds of miners were killed in July when heavy rainfall triggered a massive landslide in Hpakant, Myanmar’s worst-ever mine disaster

A torrent of water, rock and heavy sludge spun Sai Ko as he clung to a corpse to survive — a memory that still traumatizes the young “jade-picker” three months after Myanmar’s worst-ever mine disaster.

Today, Sai Ko is still recovering from head injuries sustained when the unstable mountain of waste collapsed beneath him.

Two of his friends were less lucky, among the victims of the under-regulated, notoriously corrupt, multi-billion-dollar industry that exploits the most vulnerable.

“We fear all sides of the industry,” the 22-year-old tells AFP, now back in his home village in central Myanmar.

The July 2 disaster was the worst the country has seen, but fatal landslides in Hpakant are common, especially during the relentless monsoon rains.

As the country gears up for its November election, lobby group Global Witness says it now has a chance to “reset” its policies for an industry that continues to fuel decades-long conflicts.

It is calling for a stop to large-scale mining, regulation of waste dumping and environmental protection laws with “real punishments” for those who violate them.

Otherwise “things will only get worse”, it warns.

The once-stunning mountains of Myanmar’s Hpakant township have been destroyed beyond recognition.

Satellite images show a brown sore that has spread rapidly since the 1990s, cutting across swathes of the surrounding lush jungles.

Fuelled by seemingly insatiable Chinese demand for the green gemstone, jade mining has turned the area into a treacherous moonscape of mud.

Naung Latt from the environmental group Greenland estimates about 50 mountains have simply been mined away to nothing.

Deforestation is near absolute, while diverted water flows mean the local Uyu river now breaks its banks even more frequently.

But powerful stakeholders are benefiting from the lack of regulation in an industry estimated to be worth up to 31 billion dollars a year, says Global Witness.

Very little of the profits ends up in state coffers, with most high-quality jade smuggled over the border into China.

The military’s direct involvement through its conglomerates presents a “huge conflict of interest”, the NGO says, explaining the military also controls access to the area and enjoys oversight over much of the industry.

Hundreds of thousands of Myanmar’s poorest have for years headed to Hpakant to pick up what is left behind by the big companies.

“The whole industry is criminal, with these guys at the bottom.”

One major player is the Kachin Independence Army (KIA), a rebel group which has been fighting the military for decades for control of the mines.

“Those with weapons dominate here,” one local official tells AFP, asking not to be named.

“When someone finds a good stone, the police, special branch and KIA all come to demand their share.”

But the jade also funds conflicts further afield, with militias and ethnic armed groups from across the country enmeshed in the trade, says Global Witness.

With nearby Shan state pumping out heroin and meth at rock bottom prices, multiple sources confirmed the mines have seen an explosion in drug use in recent years.

Naung Latt estimates up to 85 percent of jade pickers are users.

A stalled gemstone law, which would help clear up the industry, must be finalized, says Global Witness.

“Armed actors need to exit, or be pushed out,” the NGO says, adding that resource governance should be included in ongoing peace talks — and China must be pressured into cracking down on illegal border trade.

When contacted by AFP, every stakeholder points the finger elsewhere.

Local administrator Phon Gring claims the main problems are confined in areas under the control of non-state armed groups and the military.

He and his family refuse to return to Hpakant’s perilous mines, but he fears for the lives of others he knows there.

“I just want the government to make it safer.”