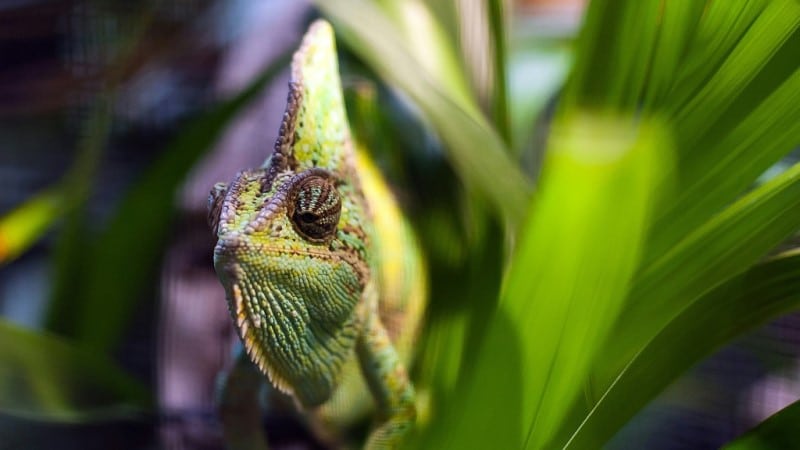 More than a third of reptile species are bought and sold online in often-unregulated international trade, researchers said Tuesday, warning of the impact on wild populations of a pet market that puts a bounty on rare and newly discovered animals.

Even endangered species and those with small habitats — such as the speckled cape tortoise and Seychelles tiger chameleon — are bought and sold in online forums, according to the new study by researchers in Thailand and China, who found that three-quarters of trade is in species not covered by international regulation.

The market primarily caters to buyers in Europe and North America — the British Federation for Herpetologists has reported that there are more pet reptiles than dogs in Britain.

But unlike most other pets, the study found that 90 percent of traded reptile species and half of traded individuals are captured from the wild. 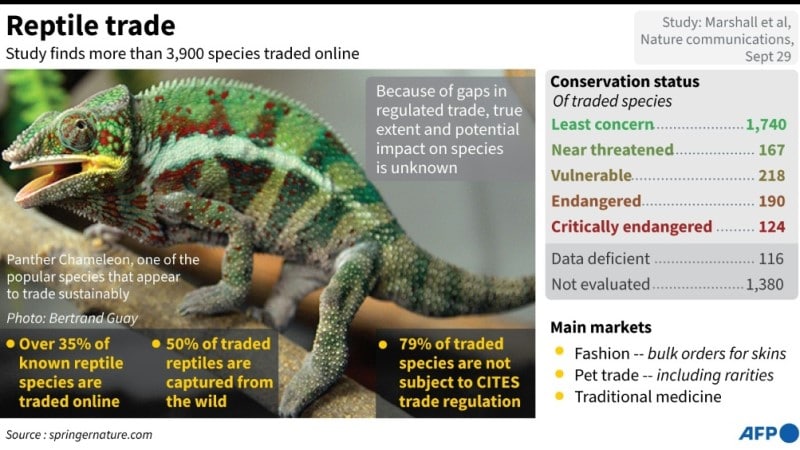 Graphic on the findings of a study on the traffic in endangered reptiles.

“We did not expect that almost 40 percent of the world’s largest terrestrial vertebrate group would be in trade, that so many endangered and critically endangered species would be included,” co-author Alice Hughes of China’s Xishuangbanna Tropical Botanical Garden told AFP.

Researchers used the database of the Convention on International Trade in Endangered Species (CITES), which monitors international trade in its listed species and the Law Enforcement Management Information System (LEMIS) covering wildlife imports into the US.

The authors also searched some 25,000 web pages based on keywords in five languages and found that at least 36 percent of reptile species are being traded — or 3,943 species.

The research, published in the journal Nature Communications, identified parts of Southeast Asia as of most concern for the trade in endangered species.

In Africa, meanwhile, most countries had significant numbers of species that had not been assessed for vulnerability to extinction.

Hughes highlighted fears for newly-discovered species, with some animals appearing for sale online just months after they were described to science.

“Combined with the ease of keeping most reptiles there is the ‘cool’ angle, which is why there is a real pursuit of novelty, especially for colorful or unusual species like leaf tail geckos,” said Hughes.

She said that because it takes time for a species to be listed with CITES, newly described species would not necessarily have any trade protections and this creates incentives for wildlife traffickers.

Richard Thomas, head of communications at the wildlife trade monitor Traffic, said scientists who describe a new species of reptile “are in the invidious position of putting a price on its head if they disclose the precise location”.

“They will doubtless be aware it will lead to a run on the species from specialist collectors and breeders, and yet the type locality is an essential piece of the scientific documentation of the species that deserves to be in the record.”

He said examples include the Roti Island Snake-necked Turtle, “decimated in the wild after its discovery”, or Borneo’s Earless Monitor-lizard, which began appearing for sale online in specialist reptile keeper groups shortly after its rediscovery.

Thomas said that the situation was not confined to reptiles, adding the discovery locations of at least two new slipper orchids in northern Vietnam have never been disclosed in the scientific literature “for their own safety”.

But he said sourcing from the wild was not always a threat to species because it can create an incentive to protect their habitat.

Hughes and colleagues proposed shifting the burden of proof to ensure trade is sustainable before it is permitted, and called for better regulation in the pet trade.

But Thomas said even the regulated trade in CITES listed reptiles is “fraught with difficulties” and open to fraud, because they do not apply to captive-bred individuals.

“Many of these species are wild caught but laundered into legal trade through deliberate misdeclaration,” he said.