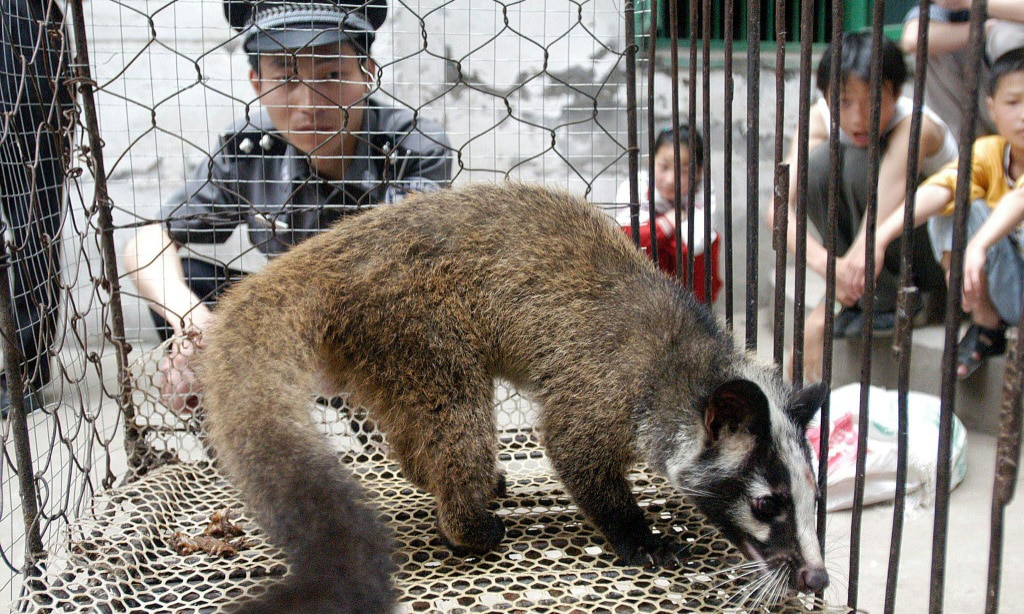 ​A policeman watching over a civet captured by a farmer in Wuhan, in central China’s Hubei province

Raising, transporting or selling all wild animal species is forbidden “from the date of the announcement until the national epidemic situation is over”, said a government directive.

The ban was issued by the Ministry of Agriculture, the State Administration for Market Regulation, and the National Forestry and Grassland Administration.

The lethal virus, which has caused 56 confirmed deaths and nearly 2,000 total infections in China, and spread to about a dozen countries, is believed to have originated in a market in the central city of Wuhan, where a range of wildlife was reportedly sold.

Conservationists have long accused China of tolerating a shadowy trade in exotic animals for food or as ingredients in traditional medicines, including highly endangered species such as the pangolin or tiger.

Health experts say the trade poses a significant and growing public health risk as potentially dangerous animal-borne pathogens that people would normally not be exposed to make the jump to humans.

Civets, a cat-like creature, were among dozens of species listed on an exhaustive price list for one of the animal-trading businesses at the Wuhan market that emerged online last week.

Sunday’s announcement said all businesses, markets, food and beverage outlets and e-commerce platforms are “strictly prohibited from trading in wild animals in any form”. 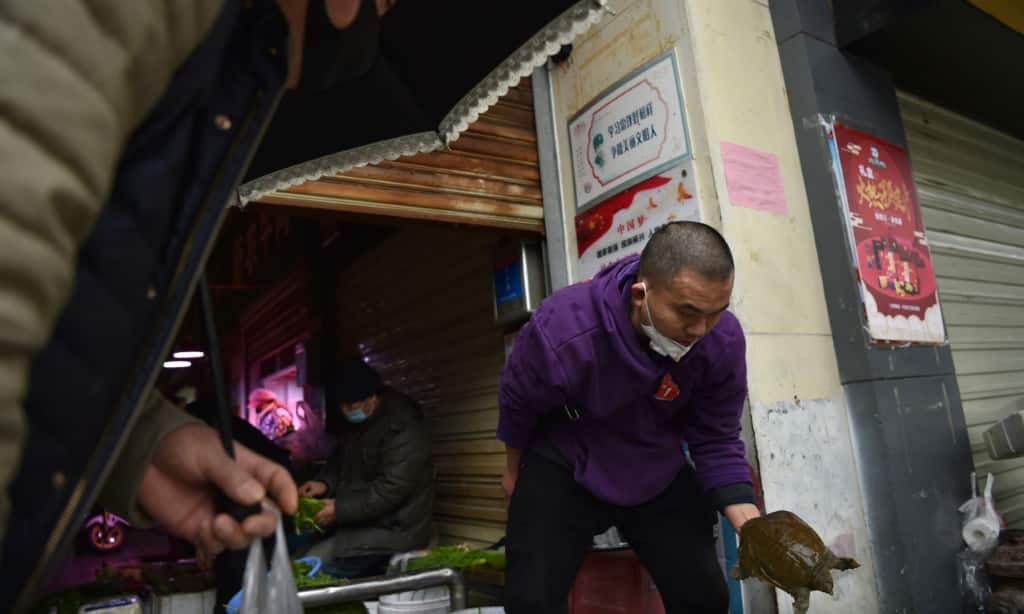 A turtle for sale at a market in Wuhan, the epicentre of a deadly new virus that came from an animal

It added that “consumers must fully understand the health risks of eating wild animals, avoid wild game, and eat healthy”.

The so-called bushmeat trade, along with broader human encroachment on wild habitats, is bringing humans into ever-closer contact with animal viruses that can spread rapidly in today’s connected world, scientists say.

A study by the Global Virome Project, a worldwide effort to increase preparedness for pandemics, estimated that there are nearly 1.7 million undiscovered viruses in the animal kingdom, nearly half of which could be harmful to humans.

Peter Daszak, a virology expert with the project, told AFP its research also indicated that we can expect around five new animal-borne pathogens to infect humanity each year.

China has launched previous crackdowns on the wildlife trade, including after SARS, but conservationists say the trade typically resumes over time.

Rights groups called for the ban to be made permanent.

“The banning of such sales will help end the possibility of future outbreaks of zoonotic diseases, such as the Wuhan coronavirus,” said Christian Walzer, chief global veterinarian at for the Wildlife Conservation Society.

Kate Nustedt of World Animal Protection, said the move would “put a stop to the horrific conditions that serve as such a lethal hotbed of disease”.

The animal-borne SARS virus 17 years ago was supposed to be a wake-up call about consuming wildlife as food, but scientists say China’s latest epidemic indicates that the practice remains widespread and a growing risk to human health.

Like SARS (Severe Acute Respiratory Syndrome), which was traced to bats and civets, the virus that has killed dozens in China and infected almost 2,000 people is believed to have originated in animals trafficked for food.

Final findings are yet to be announced, but Chinese health officials believe it came from wildlife sold illegally at a meat market in the central city of Wuhan that offered everything from rats to wolf puppies and giant salamanders.

The so-called “bushmeat” trade, plus broader human encroachment on wild habitats, is bringing us into ever-closer contact with animal viruses that can spread rapidly in our uber-connected world, said Peter Daszak, president of EcoHealth Alliance, a global NGO focused on infectious disease prevention.

The Global Virome Project, a worldwide effort to increase preparedness for pandemics, which Daszak is a part of, estimates there are 1.7 million undiscovered viruses in wildlife, nearly half of which could be harmful to humans.

Daszak said the project’s research indicates we can expect around five new animal-borne pathogens to infect humanity each year. 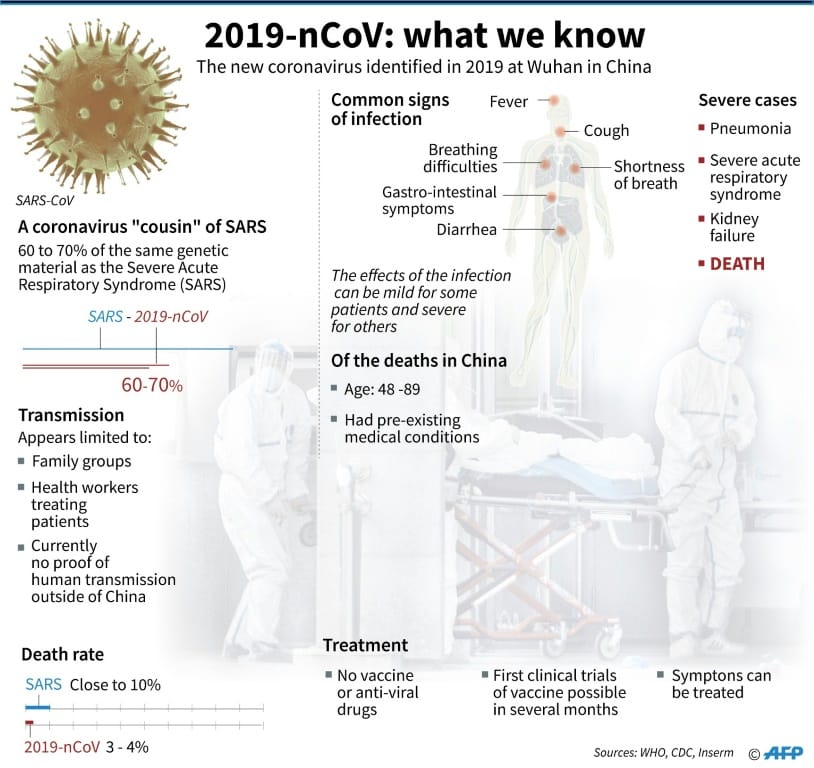 “The new normal is that pandemics are going to happen more frequently,” he said.

Viruses are a natural part of the environment, and not all are the stuff of sci-fi horror.

But the recent track record of animal-hosted viruses that “jump” to humans is sobering.

Like SARS, which killed hundreds in China and Hong Kong in 2002-03, Ebola also was traced to bats, while HIV has roots in African primates. 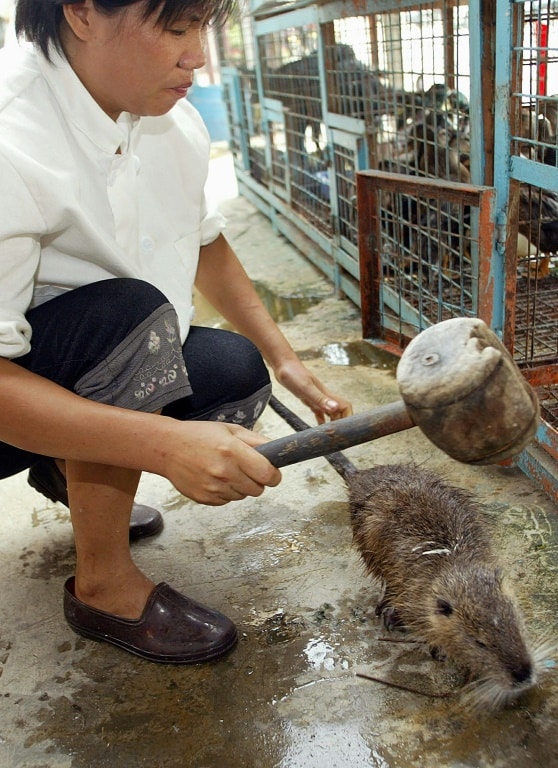 Even familiar menu items like poultry and cattle — whose pathogens we have largely adapted to over millennia — occasionally throw a curveball, like bird flu or mad-cow disease.

For the sake of these wild species’ future, and for human health, we need to reduce consumption of these wild animals,” said Diana Bell, a wildlife disease and conservation biologist at University of East Anglia who has studied SARS, Ebola and other pathogens.

“But, 17 years on (from SARS), apparently that hasn’t happened.”

Wild-meat consumption itself is not necessarily dangerous — most viruses die once their host is killed.

But pathogens can jump to humans during the capture, transportation, or slaughter of animals, especially if sanitation is poor or protective equipment not used.

On Thursday, the southern province of Guangdong, a center of rare-species consumption, said it was immediately halting trade in wild animals.

Similar promises were made following SARS, yet conservationists say the trade continues, aided by loophole-riddled Chinese laws regarding many species, and episodic or just plain lax enforcement.

Chinese authorities have addressed the problem partly by encouraging a farmed-animal industry.

This has included for endangered species like tigers, whose parts are prized in China and other Asian countries as aphrodisiacs or for other uses.

But that comes with its own downside, by providing a channel for more sought-after wild-caught beasts to be laundered as “farmed,” Bell said. 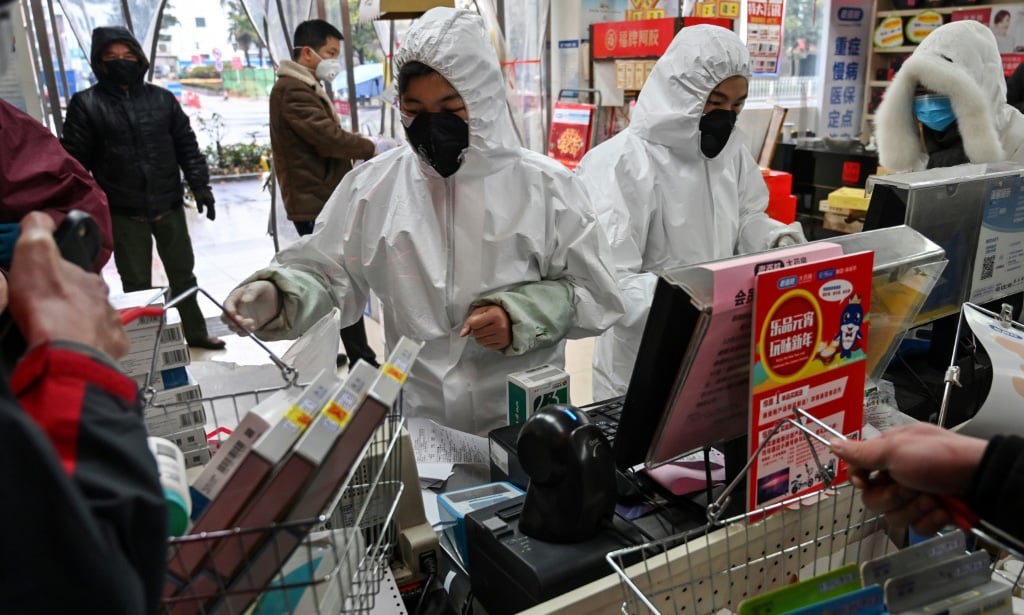 Pharmacy workers wear protective clothes and masks in Wuhan, the epicenter of the latest deadly virus outbreak to have jumped from animals

Some rare species have been prized in China as delicacies or for unproved health benefits since ancient times.

“Everyone wants to eat better, so there is a market for wild animals.”

“I think that in 50 years this will be a thing of the past,” Daszak said.

“The problem is that we live in such an interconnected world today that any pandemic like this can spread globally in three weeks.”