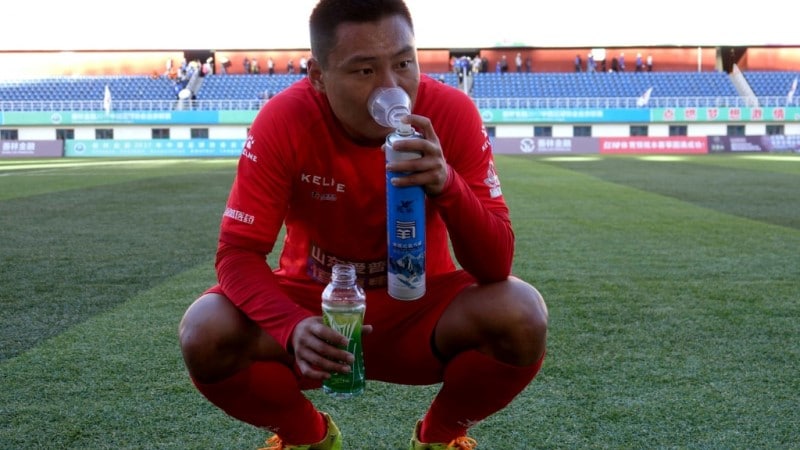 Footballers in Tibet have to use oxygen bottles during games

Lhasa Chengtou played only two games in the Tibetan capital — which sits at an oxygen-sucking altitude of 3,650 meters (12,000 feet) — and on both occasions the referee had to suspend play every 15 minutes to let the players breathe bottled oxygen, Xinhua news agency said.

The demise of the club, just three years after it was founded, is a blow to the ruling Communist Party’s hopes of having a team in the professional leagues to make Tibetans feel more integrated into China.

Lhasa Chengtou finished last season 26th of 32 teams in China’s third division and had been playing their home matches thousands of kilometers (miles) away.

“As a window to show Tibetan football to the world, we’ve been coordinating to host games in Tibet, but in vain,” the club said in a statement on the Twitter-like Weibo to its 2,500 followers, announcing its closure.

The team has been training and hosting matches in other parts of China and was desperate to get back to Tibet, but the Chinese Football Association reportedly would not sanction games at high altitude over concerns for player safety.

There were claims that during one match in Lhasa, six players from visiting Shenzhen Pengcheng had to be stretchered off with altitude sickness. That was denied by Tibetan police.

“All of the available pitches are over 3,000 meters above sea level” in Tibet, Xinhua said.

The club said the other reason for its dissolution were CFA rules banning corporate names. The team was also known as Lhasa Urban Construction Investment, after a major state-owned company in Tibet.

Last week, Lhasa Chengtou said it was letting all its coaches, players and staff go.

Since the club was established, the team played only five matches in Tibet and instead staged games last year in Deyang, Sichuan province, more than 2,400 kilometers from Lhasa, the Global Times said.

The fate of the club’s youth players was unclear, but the Global Times said last week that more than 70 youngsters aged 13 to 16 — all Tibetan — were training in Lhasa despite the punishing conditions and the team’s imminent demise.

Although Lhasa Chengtou were only formed in 2017, initially in the amateur league, football has a long history in Tibet after it arrived in the remote region with the British army at the beginning of the 20th century.

Lhasa Chengtou are the 17th club to depart Chinese professional football this year, Global Times said, a trend that is undermining China’s efforts to become a superpower in the sport.

The financial problems of cash-strapped clubs have been exacerbated by the coronavirus, which has indefinitely delayed the Chinese football season.