Border Crossing between Pakistan and Afghanistan Reopens after Taliban Seizure 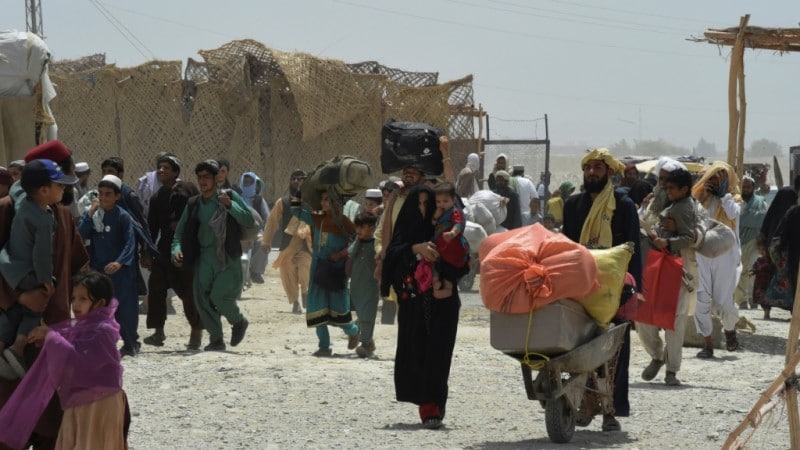 People walk towards the border crossing in the Pakistani town of Chaman, across from the Afghan town of Spin Boldak

A key crossing between Pakistan and Afghanistan partially reopened on Saturday, days after the Taliban took control of the Afghan border town in a rapid offensive across the country.

Pakistan shut off the border when the militants captured Spin Boldak from Afghan government forces on Wednesday, leaving thousands of people stranded on either side and trade at a standstill.

A Pakistani border official, who did not want to be named, told AFP that people were being allowed to enter Pakistan in small groups, while hundreds were heading into Afghanistan.

An AFP journalist witnessed people crossing in both directions.

“We have decided to let them cross over to Pakistan… after checking their travel documents, enabling them to join their families on Eid (al-Adha),” the border official said, referring to the Muslim holiday which will be celebrated next week.

Pakistani Noor Ali, who had been visiting Kabul, said it took him two attempts to reach Spin Boldak in recent days because of fighting in Kandahar province, on the border.

“I was scared, but the Taliban did not create any problems, they checked my documents and allowed me to go through,” he told AFP after arriving in the nearby city of Quetta.

The Taliban’s seizure of the border town follows weeks of intensifying clashes across Afghanistan, with the insurgents capitalizing on the last stages of the US troop withdrawal to launch a series of lightning offensives, overrunning districts at a staggering rate.

The group have also taken other vital border crossings with neighboring countries in the north and west.

An Afghan returning to work in the northern Pakistani city of Peshawar said he passed government soldiers and Taliban fighters on his journey through Kandahar province to the Spin Boldak crossing.

“I saw tanks and guns on my way and I was stopped yesterday by Afghan soldiers who warned me about the security problems in Spin Boldak,” Abdul Latif told AFP after getting to Quetta.

“I saw the Taliban moving around but they let me go over the border.”

The Spin Boldak-Chaman border crossing is an economic lifeline for southern Afghanistan.

The landlocked country depends on the crucial commercial artery to export much of its agricultural produce, such as almonds and dried fruits. It also serves as the entry point for finished goods coming from Pakistan.

Controlling the crossing will likely provide the Taliban with an economic windfall, allowing the insurgents to tax the thousands of vehicles that pass through the frontier daily.

On Saturday hundreds of people were heading across the border to Afghanistan.

“We have opened the Chaman border… allowing crowds of up to 4,000 Afghans including women and children to cross over to Afghanistan to celebrate Eid al-Adha with their families, purely on humanitarian grounds,” said the Pakistani border official.

Muhammad Tayyab, a Pakistani paramilitary official, said the decision was taken because of “relative calm on the other side”, but said the crossing would remain closed to trade.

Afghan government forces on Friday launched an operation to try and take back control of Spin Boldak.

Following fierce skirmishes, dozens of wounded Taliban fighters were brought across the border and were being treated at a Pakistan hospital, an AFP correspondent at the scene reported.

But on Saturday, the Taliban’s white flags could still be seen flying over the crossing.