‘Talibanned’: From Kite-Running to Breakdancing, Afghan Pastimes Again under Threat 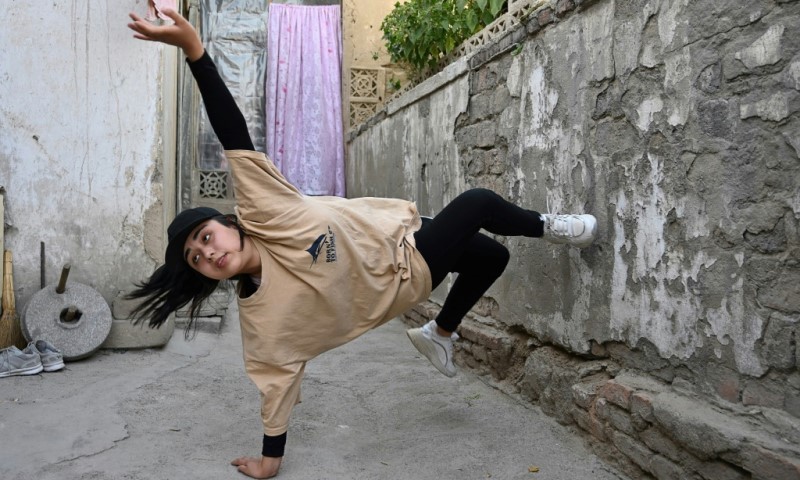 Manizha Talash is the only female member of a breakdancing group, an activity banned under the Taliban

The Taliban outlawed dozens of seemingly innocuous activities and pastimes in Afghanistan during their 1996-2001 rule — including kite flying, TV soap operas, pigeon racing, fancy haircuts, and even playing music.

These have made a comeback in the years since, but fears are growing they will be banned again if the hardline Islamists return to power.

The insurgents have made enormous military and territorial gains since US troops began their final withdrawal in May, and their leaders say they want Afghanistan to return to being an Islamic emirate ruled by religious elders.

AFP looks at some of the activities the Taliban banned, and the fears of those now taking part in them. 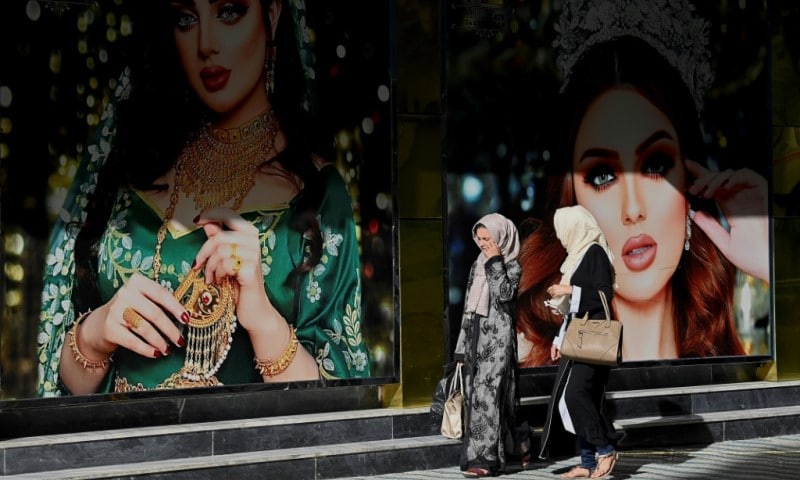 The Taliban banned Beauty parlors alongside other activities and professions, and Afghans fear these will be prohibited again if the group regains power

Sayed Mohammad makes a living as a professional musician playing the japani, a traditional Central Asian stringed instrument he first picked up as a boy.

He still remembers the evening two decades ago when the Taliban broke into a house where he and his friends were playing music and singing songs.

According to the Taliban’s strict interpretation of Islam, only the human voice should produce music — and only in praise of God.

“I was young, so I was beaten less than my friends,” said Mohammad, now 40 and a resident of the former insurgent bastion of Kandahar.

“I was still unable to stand for three days,” he added.

He was lucky, he said, describing how on another occasion the Taliban cut off the fingers of one of his friends for playing the japani.

When the insurgents were ousted, Mohammad celebrated by attending a concert.

“When the music played, I felt a tremor passing through my body out of sheer joy,” he said.

“Joy that our country was free and that people were now free to start a new life.” 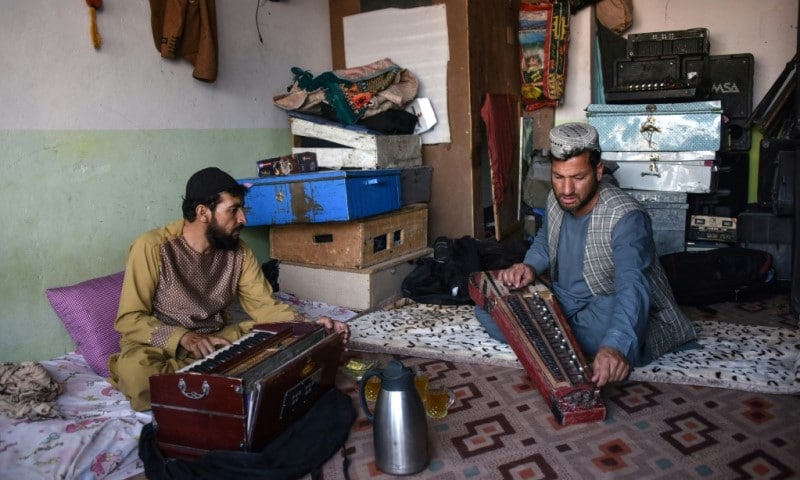 Since then, many Afghans like Mohammad have become professional musicians and singers.

“There is no pleasure in life if we live in fear,” the father of eight told AFP.

He is determined to pursue his passion — even if the Taliban return to power.

“It’s like an addiction. Even if they cut our fingers we will still play music.” 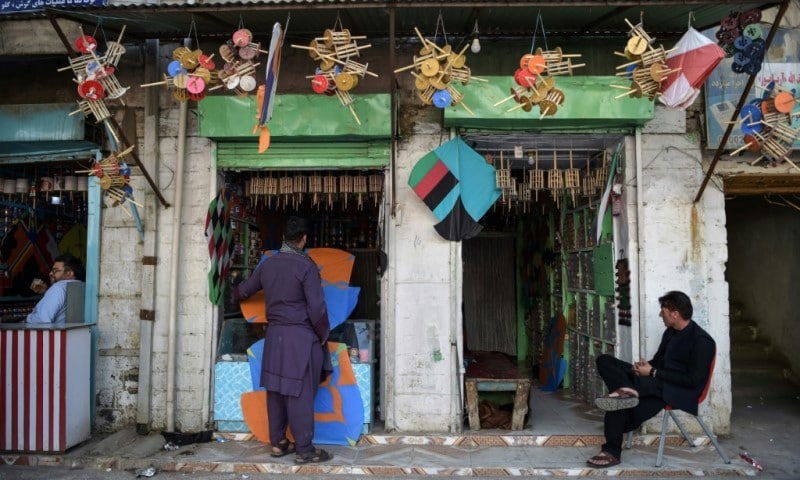 Music, dancing, kite-flying, and make-up were just some of the activities banned in Afghanistan under the Taliban

In a small shop in the Afghan capital Kabul, beautician Farida transforms a shy young Afghan woman into a radiant bride-to-be.

Oversized false eyelashes are delicately glued on, followed by the application of a rich carmine-red lipstick. Next comes eyeshadow, before beige and ochre blush is delicately brushed on.

Despite its bustling popularity, Farida’s beauty parlor is one of hundreds across the country that face an uncertain future.

The Taliban severely restricted the movement and activities of women and girls during their rule, and banned beauty parlors from operating in public.

“If they come back, we’ll never have the freedom we have now,” said 27-year-old Farida, who asked not to be further identified. 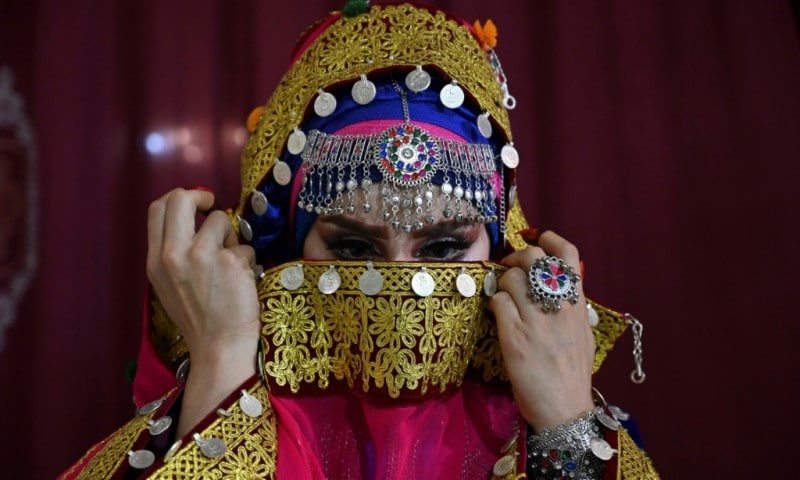 Farida’s shop is busiest on Thursday and Friday — the weekend in Afghanistan, when hundreds gather for huge wedding ceremonies.

Out of the sight of men, the women come to be pampered for a few hours.

Beauty comes at a price, however. At Farida’s salon, one of Kabul’s most popular, a full treatment package can cost up to $300.

“I think the Taliban will force us to leave when they come,” Farida said, adding she would love to move to Canada given a chance. 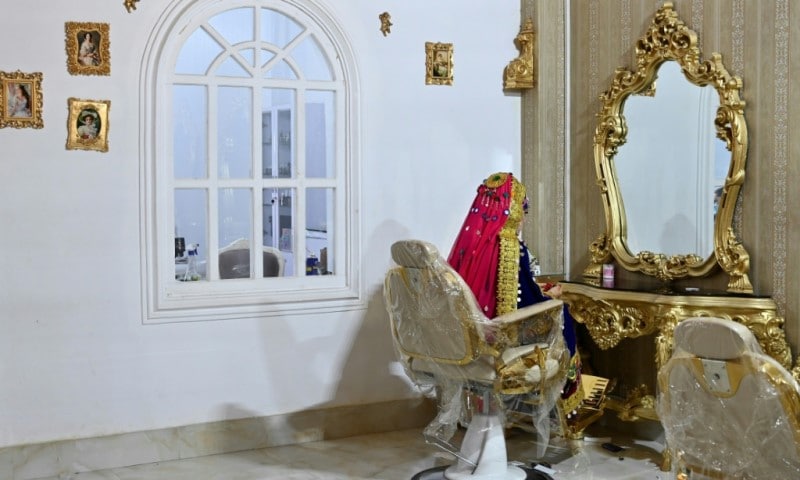 In a bustling Kabul market shop, surrounded by hundreds of colorful kites of all sizes, Zelgai says he is determined not to give up the business his family has run for generations — and he has flown close to the wind before.

The Taliban outlawed kite flying on the grounds it distracted young men from praying and other religious activities, but Zelgai and his family kept operating.

“Of course, we did it in secret,” the 59-year-old told AFP at his shop in the capital’s Shor bazaar.

His colourful store has hundreds of fragile ready-made kites for sale, and he also takes orders for elaborate custom designs.

And business has soared in the years since the Taliban were ousted. 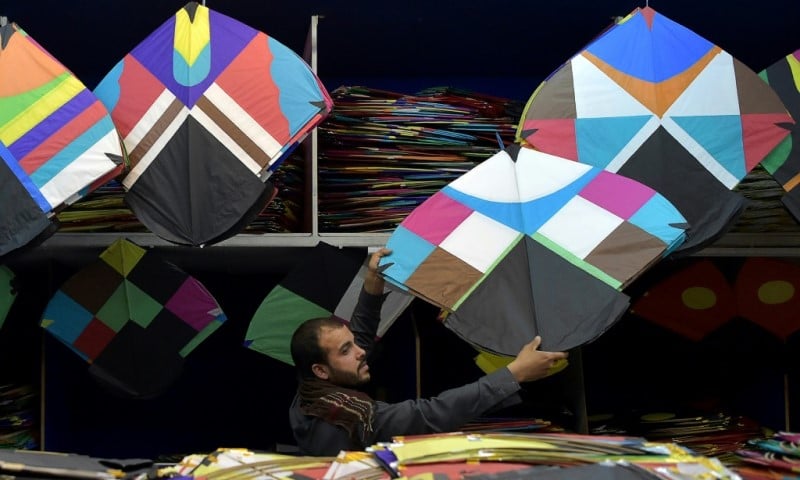 “This is freedom… we are able to showcase and sell our kites openly without any fear,” Zelgai said.

The much-loved national pastime earned a reputation abroad after Afghan author Khaled Hosseini’s 2003 bestselling novel “The Kite Runner” was turned into a film.

Today, when the wind is right, thousands of kites can be seen fluttering in Afghanistan’s clear blue skies.

Some are engaged in fights, with the pilots trying to outwit each other with their flying skills and some using glass-encrusted twine to cut the strings of their opponents.

“People would suffer if it is banned. Thousands of families survive on this,” Zelgai said. 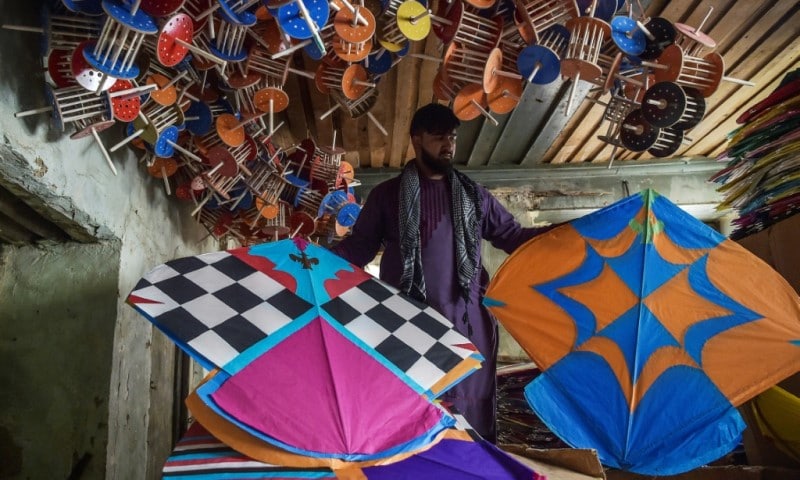 The day Manizha Talash took up breakdancing she knew she would become a target for the Taliban.

Talash is the only female member of a group of mostly Hazara boys who practice breakdancing in Kabul — usually in secret.

The 18-year-old has the support of her mother, who has several jobs to support the family after her husband went missing a few years ago.

But for Talash, who dreams of representing Afghanistan at the Olympics, the risks of continuing are multiple.

Not only is she a girl taking part in a forbidden activity, she is also a member of the Hazara community, considered heretical by some Muslim radicals. 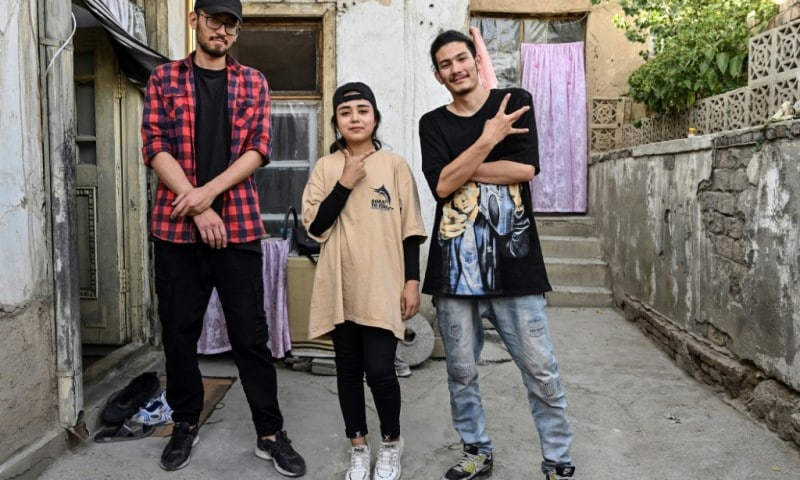 “If the Taliban have not changed and they lock women at homes and trample their rights, then life would be meaningless for me and for millions of other women of Afghanistan,” said Talash.

Despite the risks — the troupe was forced to switch practice venues after receiving death threats — she is determined to pursue her passion.

There have been women pioneers in many fields in Afghanistan, and Talash now sees herself as one of them.

“We had no women police officers before; now you see them everywhere,” she said, dressed in a t-shirt, cap and black leggings — an outfit that would be anathema to the Taliban.

“I took the risk of becoming a target. I have fear in my heart but I won’t give up.” 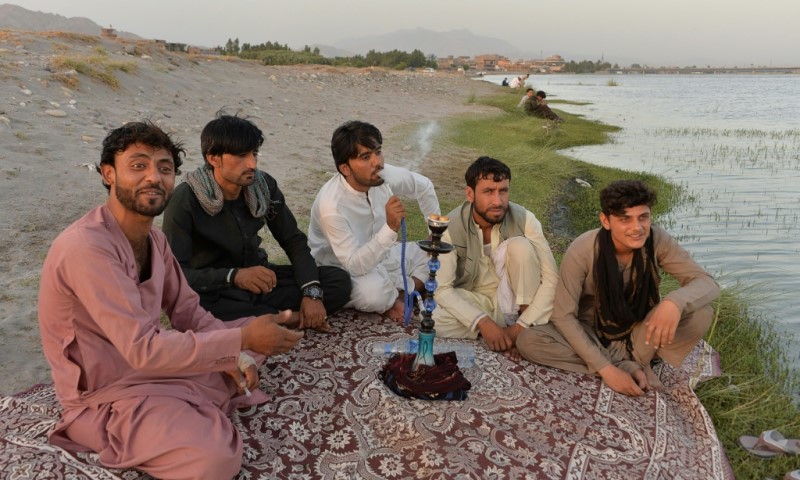 Shisha smoking, a historic pastime in Afghanistan, was banned under the Taliban

On the bank of a river flowing through the eastern city of Jalalabad, Mohammad Saleem and his friends gather every evening to smoke shisha, an ancient pastime enjoying something of a renaissance across the world.

“Smoking shisha is very normal at the moment in Afghanistan,” said Saleem, puffing the vapors of fruit-flavored tobacco from a bubbling hookah.

But the Taliban say it is an intoxicant — something prohibited by the Koran.

Shisha cafes have popped up across the country since the fall of the Taliban, serving hot saffron tea to customers occupied with their pipes.

Cafe owner Bakhtyar Ahmad believes the habit is a good way to keep youngsters off the streets — or from indulging in worse vices, such as drugs.

“There is peace here. We serve shisha and we play music in the cafe,” Ahmad said.

“If the Taliban come back with their old ideas then they will stop us.”

“It will not be possible to go for a picnic or smoke shisha by the side of a river like now,” Saleem said. 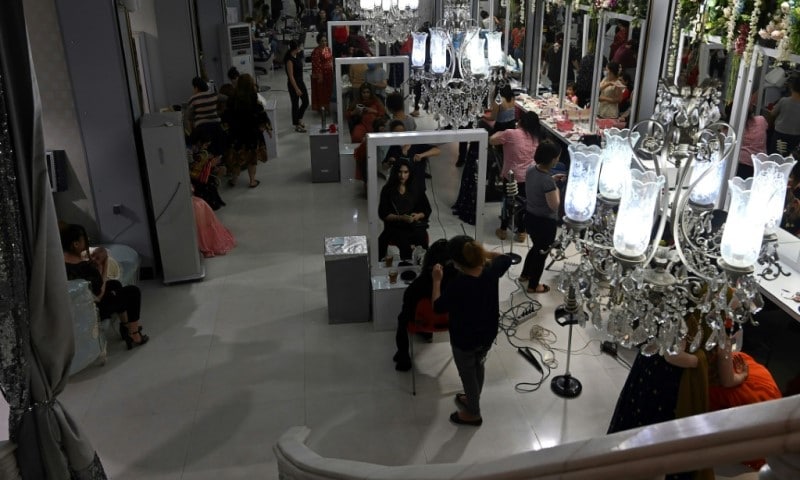 More young people are conscious of fashion in Afghanistan, said hairdresser Mohammad Ghaderi, a form of individualism prohibited by the Taliban

Business is brisk at Mohammad Ghaderi’s salon in the western city of Herat, with young men lining up for a shave or fancy haircut that matches their favorite Bollywood or Hollywood actor.

“There are more hairdressers now, more young people taking to fashion… the government is not against it like the way the Taliban were.”

While men in rural areas tend to stick to Islamic styles — a shaved top lip, a beard longer than a man’s fist — city slickers are a parade of the latest fashion.

But Ghaderi and his customers fear their individualism will end if the Taliban return.

“We are afraid that if the Taliban enter the city and the bazaar, they might be the same as they were 20 years ago,” he said.

“Again women will be in burqa and young men would not be free to do what they want,” added Sanaullah Amin, a regular customer.