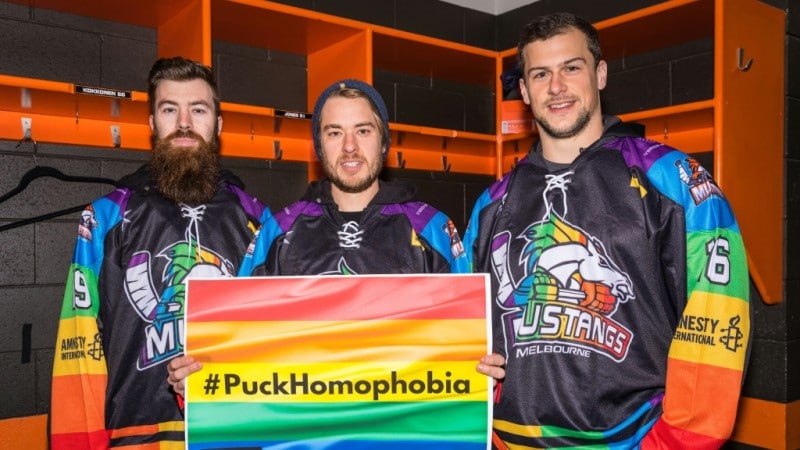 Recent research has shown that casual insults, jokes and discrimination based on sexuality are still commonplace, deterring the LGBT community from becoming involved in sport.

Lead researcher Erik Denison said Monash had carried out more than 20 studies into 40 sports on three continents since 2017.

A key question was why homophobic language was used so often by male athletes.

“It appears that conformity, rather than homophobia, is driving this language,” Denison told AFP.

“Boys grow up hearing this language, adopt it, and then pass it to the next generation

“We consistently find athletes who have positive attitudes to gay people are just as likely to use homophobic slurs.”

The Florida Panthers were the first professional hockey team to hold one in 2013 and they have since been adopted globally with sports such as Major League Baseball and Big Bash League cricket following suit.

But despite their growing appeal, little was known about their effect on homophobic behaviour.

Monash collected data in 2018 from players on all eight teams in the semi-professional Australian Ice Hockey League. A quarter are from America or Canada and none identified as gay. Two of the teams had played in Pride games.

The peer-reviewed research, released Wednesday, found 61 percent of players on the six teams without experience of playing Pride games admitted using homophobic slurs such as “faggot or poof” in the two weeks leading up to the study.

On the two teams who had played Pride games the figure dropped to 38 percent.

Players on Pride games teams were also significantly less likely to report hearing their teammates use homophobic language (54.1 percent to 69.3 percent), but Denison said it was concerning so many still did so.

“We believe combining the Pride games with clear communication about the harm it causes to gay or bisexual players is key to stopping this behaviour,” he said.

“I think Pride games help to short-circuit the vicious cycle but we obviously need to do a lot more education to stop this harmful language,” Langelier-Parent said.

“On our team we want difference to be encouraged which is why we hold events like Pride games.

“It gives us an opportunity to talk about the need to be inclusive and challenge the stereotypes around being a man.”

A follow-up study was conducted covering five other sports, including cricket and netball, with the results almost identical, Monash said. Those outcomes will be published next year.