You may have guessed that Japan is not short of amazing markets which offer a wide array of choices to its visitors. This guide will tell you everything you need to know about the Kuromon Market

A market that traces its history to more than a century ago, Kuromon Market is a Japanese treasure you should not overlook. This market is the perfect destination for foodies since it offers an overwhelming array of food choices.

Located in Osaka, this central market gets hordes of tourist; but don’t worry because it is the perfect place to introduce you to what Osaka and the rest of the country have to offer.

Many people refer to Kuromon Market as the Osaka’s Kitchen, and if you know a bit about its history, you’ll understand why. Osaka is the biggest city in western Japan and Kuromon Market is known as its center. The market was originally a place where fish is sold.

It opened in 1822 but it got its official name as a market in 1902. Its name is derived from Enmyo Temple’s black gate which stood in the area until the last year of the Meiji Period.

How To Get There

To get to Kuromon Market, take the subway to Nippombashi Station. Then, take Exit 2. The market is only around 2 minutes from the subway. it is also a 5 to 10-minute walk from Namba station.

The shops in the area have varying opening hours, although most are open during the day. It is recommended to visit the market at around 8 am to 5 pm. 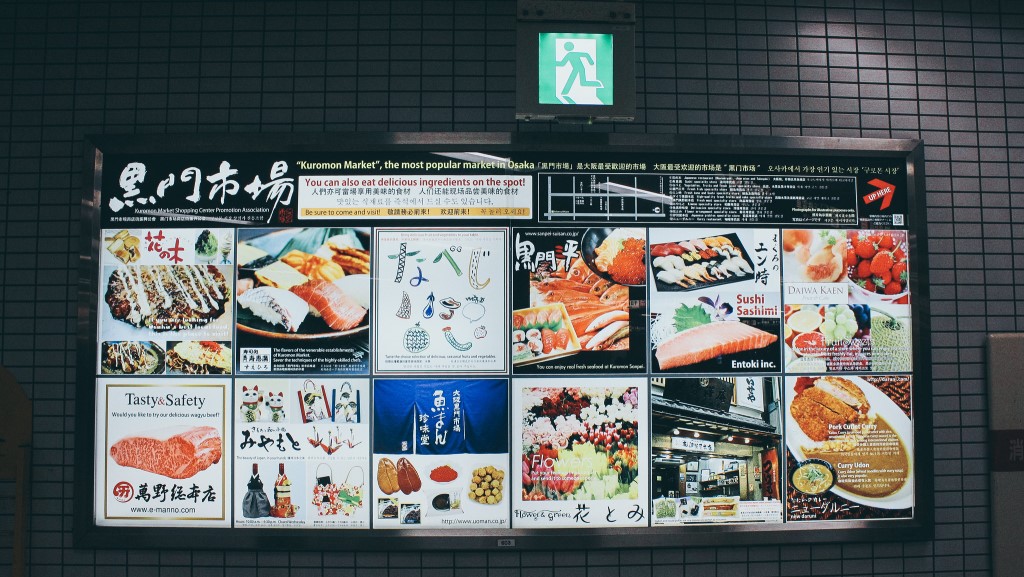 Now, over 150 shops dot the streets of the saturated market so whether you are looking for fresh organic produce, or household items, souvenirs, or even kimonos, you can find it here.

However, the market is popular because of its food, which has been perfected by its vendors for many years. Here are some foods you should try at this iconic market.

An establishment that opened 9 decades ago, Hamato was once a blowfish wholesaler which has been revamped into a restaurant. Blowfish can be extremely poisonous but the restaurant has perfected how to prepare it.

This is the perfect spot to indulge in tiger globefish or toragafu which many consider as the best kind of blowfish you can get. The best thing about this fantastic restaurant is it only uses blowfish from Japan which are mostly gotten from Awaji Island and Nagasaki Prefecture.

The reason why the market’s Takoyaki is so good is because its ingredients are always fresh. When in Kuromon Market, you should try Takoyaki at Takoyaki Wanaka, one of the most famous brands which serve the iconic Japanese treat in the area.

There are also many takoyaki stalls you can find around the market in case you want to eat a second serving. Make sure to order Takoyaki with cheese, a unique take on the yummy octopus pancakes.

It is a sin to miss sushi when visiting the market. Since the Kuromon Market is known for its fresh seafood, you’re sure that you are getting nothing but the best. As you take a bite of satisfying sushi, you’ll definitely want to have it every day for the rest of your life. The market also offers tons of sashimi options.

You’ll know you’re in one of the best markets in the world when you see wagyu being served as street food. Chow down on a healthy serving of Wagyu beef as you take a walk on its streets. You’ll be surprised at the tenderness of the meat.

Get Lost in the Kuromon Market

Without a doubt, Kuromon market is a great place to visit if you want to hit many birds with one stone. Great food, amazing culture, and rich history – it has it all. You’ll definitely enjoy walking along the market and immersing yourself in what it has to offer.