Anyone who loves to explore different countries know that applying for a Visa is a tedious task. Here’s an in-depth look at powerful Asian passports which make traveling easier.

Love to travel the world but hate processing your visa? Looks like this problem isn’t something many Asians are worried about. In the most recent update of the Henley Passport Index, three Asian countries topped the list of enjoying visa-free travel to numerous destinations all over the world.

For the longest time, the German Passport has been taking the top spot as the world’s most powerful travel document. However, the scales have finally tipped in favor of a giant Asian nation – Japan.

What is the Henley Passport Index?

Published by Henley & Partners, the Henley Passport Index makes use of information from the International Air Transport Association to figure out the number of destinations passport holders in each country can visit without getting a visa. The International Air Transport Association is the most accurate and largest database of the world’s travel information.

The index is known as the most authoritative passport index, with over 14 years of data.  It is updated in real-time to show visa-policy changes. 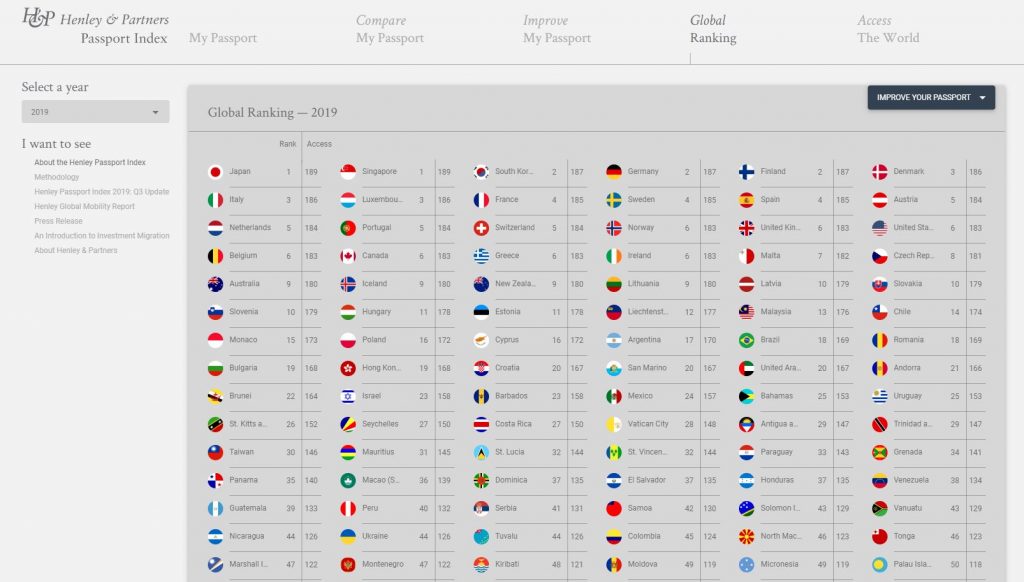 Features of the Henley Passport Index

Probably one of the most helpful sections on the Henley Passport Index Website is “Access the World.” This part details the combination of passports that would grant you access to every single country.

Get to know the most powerful Asian countries when it comes to traveling the world visa-free.

Topping the Henley Passport Index is Japan and Singapore. With visa-free travel to 189 destinations around the globe, Japan and Singapore passport holders can easily make their travel goals come to life. This unparalleled global access proves that the spectrum of mobility of Asians is slowly but surely gaining momentum.

Close behind Singapore and Japan is South Korea. Passport holders of this country can travel to 187 countries without a visa. This signals the continent’s improving mobility. It is also proof of the world’s open-door policies to Asian countries due to a significant contribution to global economy and employment.

While South Korea, Japan, and Singapore stood out on the Henley Passport Index, other Asian countries also performed well. Malaysia bagged the 13th spot, with access to 176 countries. Hong Kong got 19th place, with visa-free access to 168 countries.

Brunei got the 22nd spot, Israel is placed on the 23rd place, and Taiwan got the 30th spot. Meanwhile, developing Asian countries such as the Philippines fell behind on the index, only placing 80th place, with access to 64 countries. Indonesia placed 75th, Laos placed 95th.

Countries That Lagged Behind

The top spots in the passport index did not always belong to Asian giants. In fact, Germany, the UK, and the US used to shine on this ranking a couple of years ago. Now, US and UK fall on the sixth spot. Germany has retained the 2nd spot, sharing the placement with South Korea and Finland.