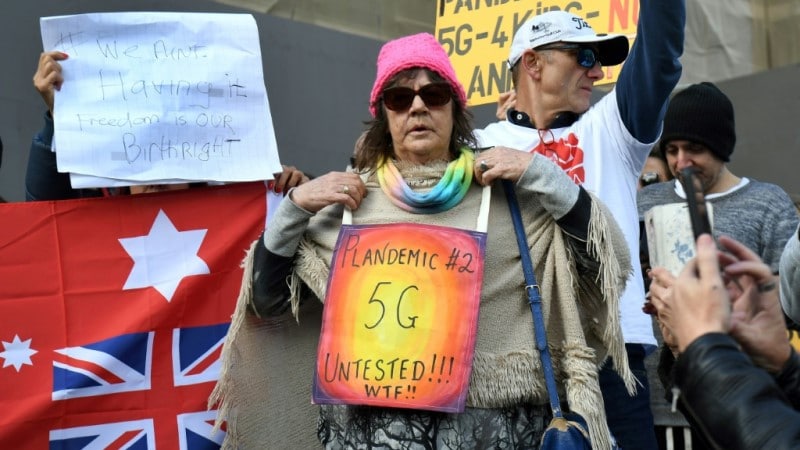 One minute Australian “wellness” personality Pete Evans is posting a barbecued prawn recipe to 1.5 million Facebook followers, the next he’s claiming the coronavirus pandemic is an elaborate global hoax.

During this year of crisis, the ever-smiling, one-time television chef known as “Paleo Pete” has become a leading purveyor of conspiracy and pseudoscience Down Under.

The pandemic has seen a worldwide explosion of misinformation with anti-vaccination groups, the far right, libertarians, state-backed trolls and anarchists forging a loose coalition of the disgruntled.

An unlikely mix of celebrities, wellness experts and social media influencers like Evans have become a powerful vector in that “infodemic”. 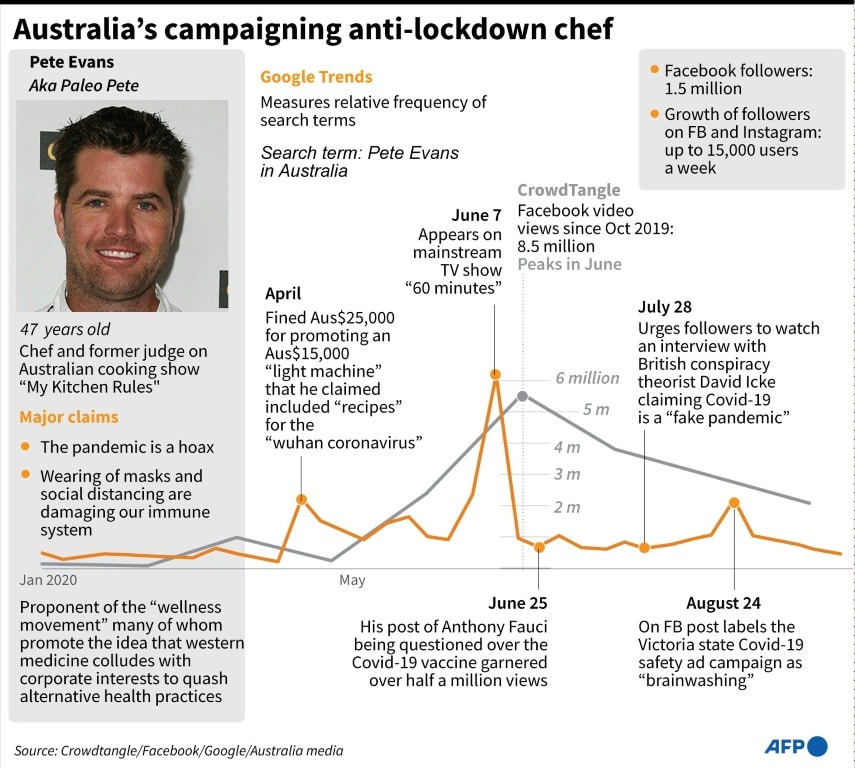 While government scientists give earnest daily briefings, Evans turns to social media to question lockdowns and rubbish the use of facemasks.

The content is often up-beat — appearing in a wetsuit with blue eyes beaming, riffing about the joys of being back surfing after injury. He signs off emails with the signature: “Cook with Love and Laughter!”

But his most popular content is often recycled from US conspiracy theories.

A post of Anthony Fauci, who has led the US government’s response to every epidemic since the 1980s, being questioned over a potential Covid-19 vaccine was a particular hit for Evans.

The post attracted over half a million views and a blizzard of conspiratorial comments against vaccinations and traditional government rule.

According to data from social media tracker CrowdTangle, Evans’ reach has increased since the pandemic began, growing by up to 15,000 users a week, rather than the net loss he often used to see.

“People are searching for answers,” said Mathew Marques, a lecturer in Social Psychology at La Trobe University. “You’ve got, I guess, charlatans and snake oil salesmen offering a cure.”

Evans denies trafficking in lies, and denounces what he calls “fear-based propaganda.”

“The pandemic is a hoax. It is as simple as that” he told AFP, claiming that wearing masks and social distancing “are in fact damaging our immune system.”

“The reason we have become the number one selling health and lifestyle author in this country is because what we share actually keeps people healthy.” 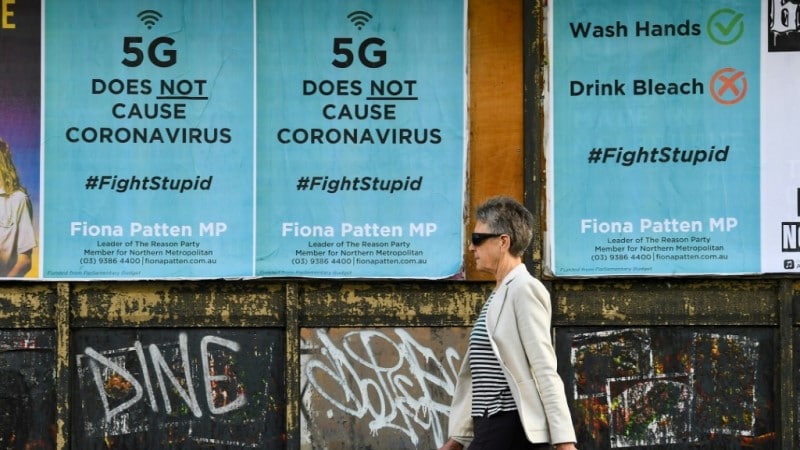 The pandemic has seen a worldwide explosion of misinformation

Academics have labelled the mash-up of New Age thinking with conspiracy theories as “conspirituality.”

“They all see themselves in some way as rebels, as a resistance,” Professor Axel Bruns from the Digital Media Research Centre at the Queensland University of Technology told AFP.

Those interested in healthy lifestyles and spirituality may have been primed for Covid-19 conspiracies — given existing distrust of western medicine and corporate interests.

The charismatic “laid back, stereotypical Aussie bloke” appeal of Evans helped him weave a narrative which pits him against powerful establishment interests, said Marques.

“These kind of big pharma conspiracy theories… these seem to be kind of interlinked with this rise of a wellness alternative.” 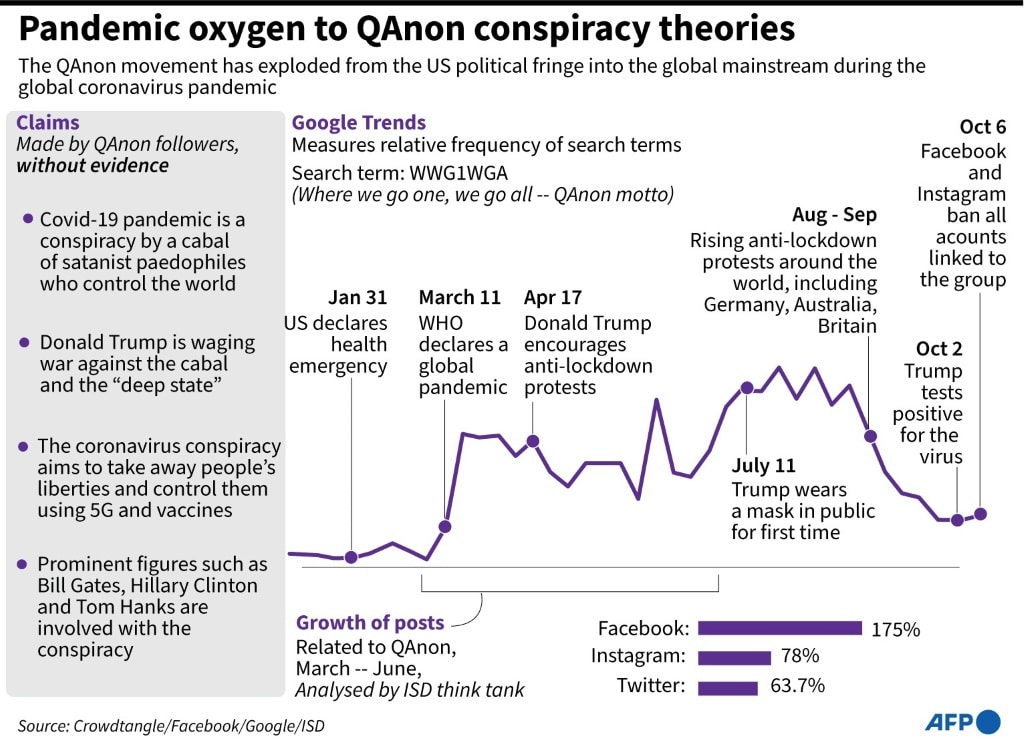 The spread of his beliefs can be seen online, and on the streets of virus-hit Australia’s cities.

“He’s bringing to light, to the people in Australia and the people around the world, how corrupt the governments are,” said Evans fan and naturopath Sheridan Lee at a recent anti-lockdown rally in Melbourne.

“If it has to be a celebrity and influencer to bring this out, then so be it.”

Fellow Melbourne protester Dellacoma Rio said he regularly listened to Evans’ livestreams and agreed with his promotion of anti-vaccination views.

“I feel like if you follow the money you see who’s getting paid to do things and where money is coming from,” he said. 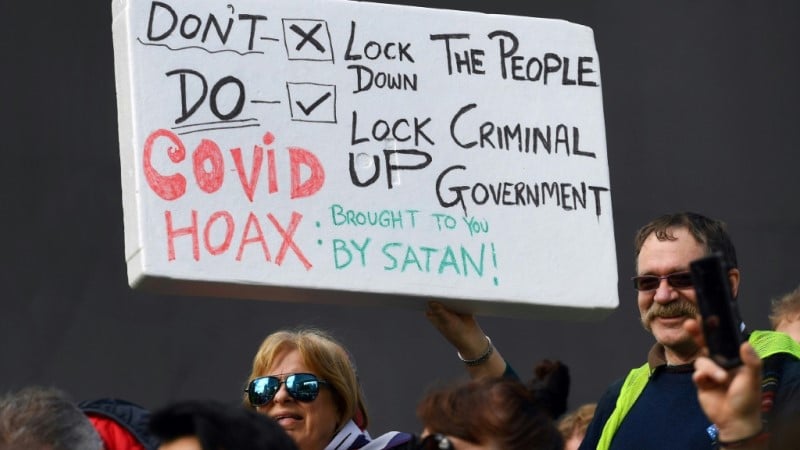 As Australians tire of the long slog to curb coronavirus, an unlikely mix of celebrities, “wellness” experts and social media influencers are finding fertile ground for sowing misinformation

For some of Evan’s critics, the question of money is pertinent.

He sells pricey “Thoughtful Food” products like “Dehydrated Beef Bone Broth with Wattleseed, Lemon Myrtle & Kakadu Plum” and has promoted an Aus$15,000 “light machine” — which looks like a psychedelic countertop blender — to help against Covid-19.

Evans denied pitching the “biocharger” for use against the disease, despite video evidence of him telling followers it had “recipes” for the “Wuhan coronavirus” — a claim which resulted in a fine from Australia’s Therapeutic Goods Administration.

“It’s hard not to look past the fact that many people offering these supposed cures or alternatives seem to be profiting from them,” said Marques.

Authorities complain that the spread of such disinformation also weakens social cohesion, which is needed to tackle the virus quickly.

“They’re taking every opportunity to leverage the current situation to serve their own ridiculous notions about so-called sovereign citizens, about constitutional issues and about how 5G is going to kill your grandkids,” he said, describing the claims as “batshit crazy nonsense.”