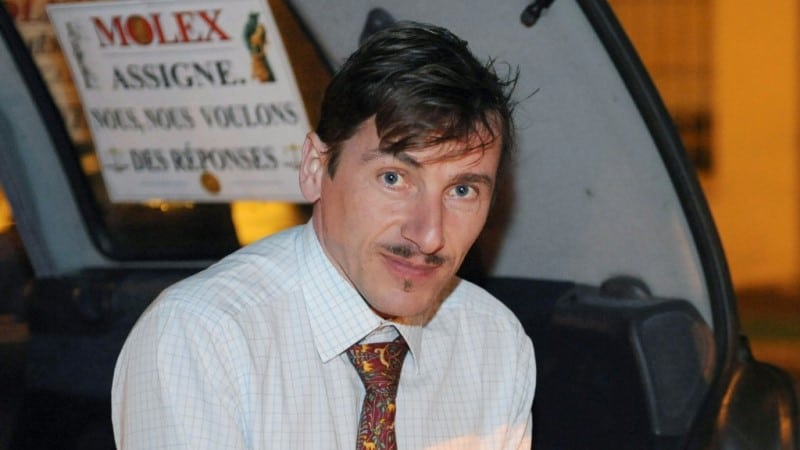 Frenchman Remy Daillet-Wiedemann, seen here in 2009, has been deported from Malaysia over allegations of his involvement in the kidnapping of an eight-year-old girl in France

Malaysia on Sunday deported a leading figure in conspiracy circles who is wanted in France over the kidnapping of an eight-year-old girl, sources told AFP.

Remy Daillet, his pregnant partner and three children were arrested late last month on the holiday island of Langkawi over their residency status.

The Frenchman and his family were taken under tight security to Kuala Lumpur airport and put on a flight to Singapore, a source familiar with the case, who spoke on condition of anonymity, told AFP.

From there, they were due to board an Air France flight for Paris, arriving early on Monday, the source said.

However, the family were still in Singapore late Sunday after Daillet’s pregnant partner was hospitalized.

“Mr Daillet and his children are under the care of the Singapore police service,” he added.

The kidnapped girl, identified as Mia, was taken in mid-April from her grandmother’s home in France by several men employed by their mother.

Six men and the mother were indicted over the abduction following an intense five-day search that ended in Switzerland.

According to some of the men, the mother’s associates were activists who believe that children in care are unfairly taken from their parents.

Mia’s mother had lost custody of her daughter and was no longer allowed to see her alone or speak with her on the telephone.

Investigators believe Daillet, known to police as a proponent of extremist conspiracy theories and a populist takeover of the state, may have helped organize the abduction.

French prosecutors in April issued an international arrest warrant for Daillet, who had been living in Malaysia for several years.

But he was detained over his residency status, making the process of deportation quicker.

Daillet is a former regional leader of France’s centrist MoDem party before he was excluded in 2010.

After the abduction, Daillet posted a video in which he said that his organization “returns children kidnapped by the state to parents, at their request. There was absolutely no kidnapping“.

In earlier videos, he has supported the idea of a coup d’etat and voiced opposition to taxes, vaccines and masks.

Mia was returned to her grandmother’s care.