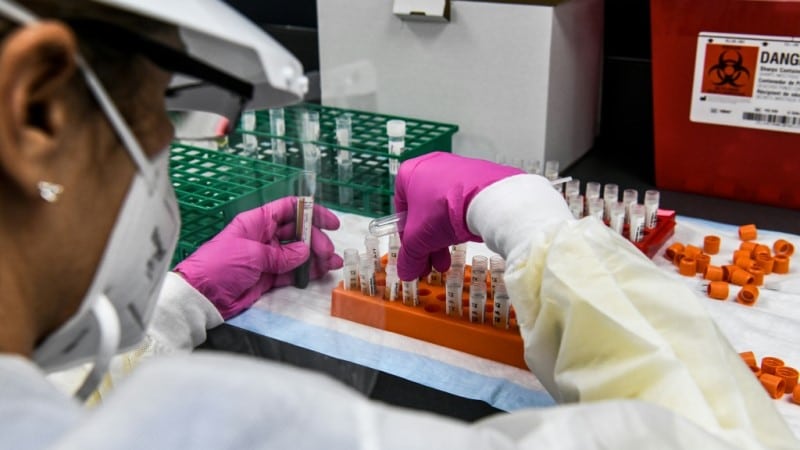 Good news on vaccines has stoked hopes, but experts warn there are still months of hard times ahead

The news from the US biotech firm Moderna comes after similar results were announced last week for a vaccine candidate developed by pharma giant Pfizer and its German partner BioNTech.

Major stock markets surged Monday in response, building on a boom sparked by the Pfizer news one week ago.

Moderna, whose results stem from a clinical trial of more than 30,000 participants, expects to have approximately 20 million doses ready to ship in the United States by year-end. 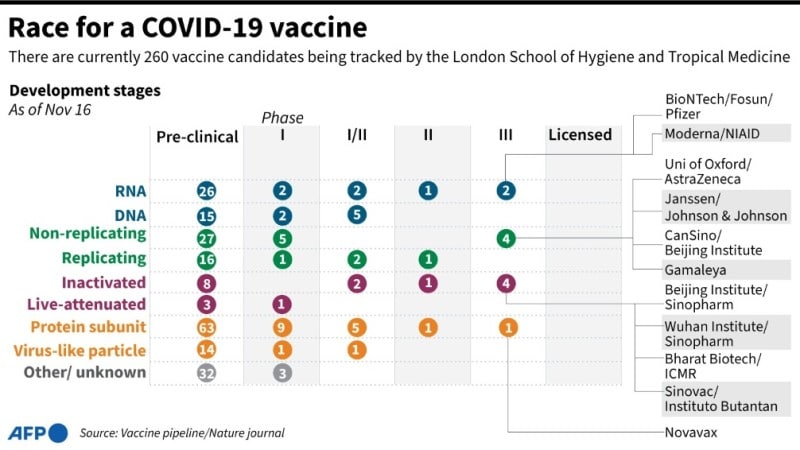 Yet with widespread availability of any vaccine still far off, governments around the world are clamping down with unpopular but life-saving restrictions on free movement, gatherings and business.

In the United States, the country worst-hit by the pandemic, President-elect Joe Biden warned that “more people may die” if outgoing President Donald Trump refuses to cooperate with Biden’s team on a national Covid-19 response including rapid vaccine distribution.

Globally, infections have neared 55 million with more than 1.3 million deaths, and experts caution there are still difficult and dangerous months ahead.

“A vaccine on its own will not end the pandemic,” warned World Health Organization head Tedros Adhanom Ghebreyesus.

Supply will initially be limited to healthcare workers and other vulnerable populations, which could offer major help to hospital systems but will “still leave the virus with a lot of room to move,” he said.

In hard-hit Europe, curbs have returned — often in the face of protests — from Greece to Britain, where Covid-19 survivor Prime Minister Boris Johnson was self-isolating out of precaution Monday after coming into contact with an MP who later tested positive for the virus.

Johnson said he would lead the virus response from Downing Street despite the fact “that I’ve had the disease and I’m bursting with antibodies” after being hospitalized in April.

Sweden, which has drawn attention for a softer approach to combating the virus, decided Monday to ban gatherings of more than eight people for the first time.

“It’s going to get worse. Do your duty and take responsibility for stopping the spread of the virus,” said Prime Minister Stefan Lofven.

And in Germany, which began a new round of shutdowns earlier in the month, Chancellor Angela Merkel was pushing for tighter measures such as masks in all schools and smaller class sizes. 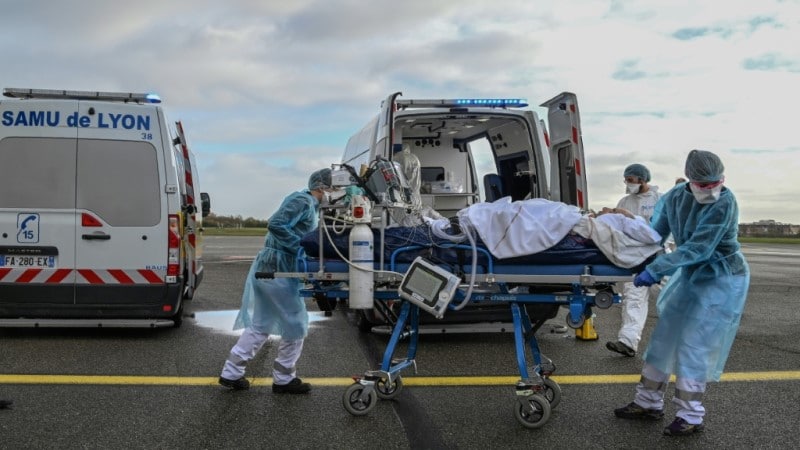 While new cases are plateauing in Germany, daily numbers, officials say, are still too high.

But Merkel said state premiers did not have any appetite to up the ante and introduce tougher curbs to bring down infection numbers.

“We still have a long way to go, but the good news is that we have halted the exponential growth for now,” Merkel told reporters.

In neighboring Belgium, the government said it intends to make any coronavirus vaccine available free of charge.

“The objective is to vaccinate at least 70 percent of the population,” Health Minister Frank Vandenbroucke stated at a health conference. 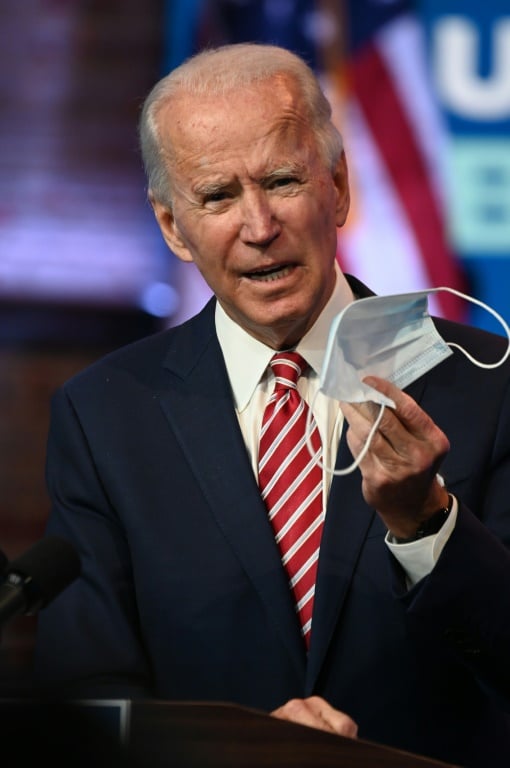 Infections in the United States, meanwhile, show no sign of relenting after one million new cases in less than a week pushed the total number past 11 million.

The spikes have prompted new curbs in various states, while experts warn families against large gatherings for the upcoming Thanksgiving holiday.

A stay-at-home advisory came into force Monday in the country’s third-biggest city, Chicago; while New York, an earlier outbreak epicenter, is also trying to flatten a second curve.

US markets shrugged off a resurgent Covid’s potential economic impact, focusing instead on the vaccine news, with the Dow Jones and S&P 500 closing Monday at record highs.

Trump has been blamed for further complicating efforts by refusing to concede and cooperate with Biden’s transition team.

Responding to the Moderna vaccine news on Twitter, Biden hailed the breakthrough as hopeful but called for continued “social-distancing and mask-wearing.”

Trump, on other hand, tried to take credit for the advancement.

“Please remember that these great discoveries, which will end the China Plague, all took place on my watch!” Trump wrote. 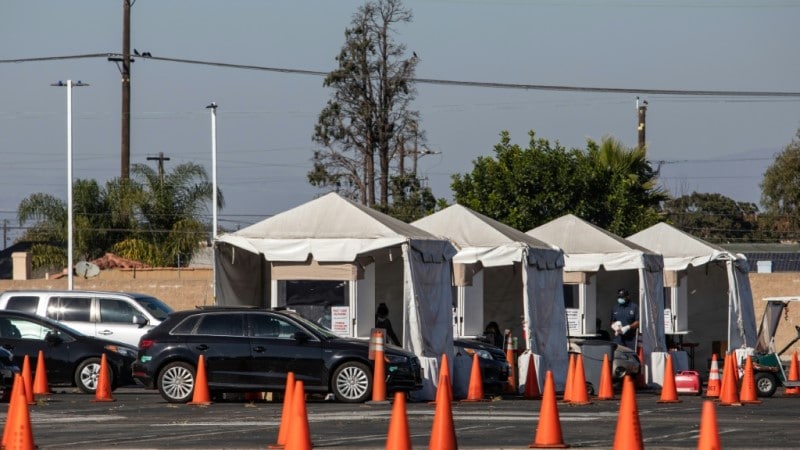 Concerns of a resurgence also remain in parts of the world that have largely brought their caseloads under control.

Australia’s Adelaide, which had not seen a significant outbreak in seven months, reported that a new cluster of 17 cases was linked to a hotel used to quarantine travelers returning from overseas.

Authorities snapped back a roster of restrictions and suspended international flights into Adelaide.

In Hong Kong, the government further tightened restrictions from Monday on the number of people in bars and restaurants, to guard against a spike.

And Algeria, facing its own surge of infections, announced new restrictions Sunday that close sport and cultural centers, as well as beaches.