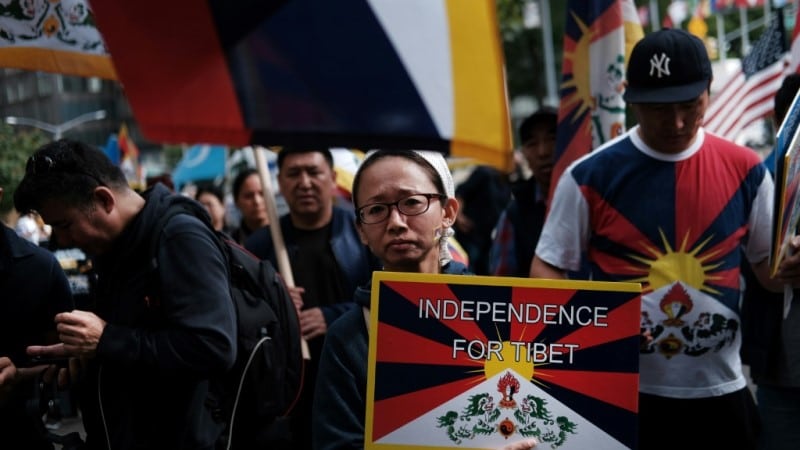 New Yorkers protest against the Chinese government in October 2019

US authorities have charged a New York police officer with espionage, accusing him of gathering information about the city’s Tibetan community for the Chinese government.

The officer, Baimadajie Angwang, who worked at a station in the Queens section of the city, was directed by members of the Chinese consulate in New York, according to the indictment released Monday.

Born in China, the man had been granted political asylum in the US, claiming he was tortured by Chinese authorities because of his Tibetan ethnicity.

Through his contacts with the Tibetan community, the 33-year-old man gathered information between 2018 and 2020 on the community’s activities, as well as identifying potential information sources.

According to the indictment, the man — who is also an officer in the US Army Reserve — allowed members of the Chinese consulate to attend events organized by the New York Police Department.

The Chinese authorities allegedly paid him tens of thousands of dollars for his service.

The officer has been charged with four counts, including enlisting in the service of a foreign country on US soil, misrepresentation and obstructing the operation of a public service.

New York City police commissioner Dermot Shea said the officer “violated every oath he took in this country. One to the United States, another to the US Army, and a third to this Police Department”.

He was brought before a judge Monday and taken into custody, a spokesperson for the Brooklyn federal prosecutor told AFP.

According to the NYPD, he is currently suspended without pay.

“The so-called indictment is full of ‘apparently,’ ‘possibly’ and other assumptions, and these are completely trumped-up charges,” Chinese foreign ministry spokesman Wang Wenbin said at a regular press briefing Tuesday.

Despite the man’s claims he was tortured in China because of his ethnicity, the investigation allegedly revealed that both of his parents were members of the Chinese Communist Party.

“If confirmed by the courts,” the espionage operation “shows that the Chinese Communist Party is engaged in malign operations to suppress dissent, not only in Tibet… but any place in the world,” said the International Campaign for Tibet, an advocacy group that promotes Tibetans’ freedoms and rights.

Beijing says its troops “peacefully liberated” Tibet in 1951, but many exiled Tibetans accuse the central government of religious repression and eroding their culture.

The Tibetan spiritual leader, the Dalai Lama, has lived in exile since 1959.