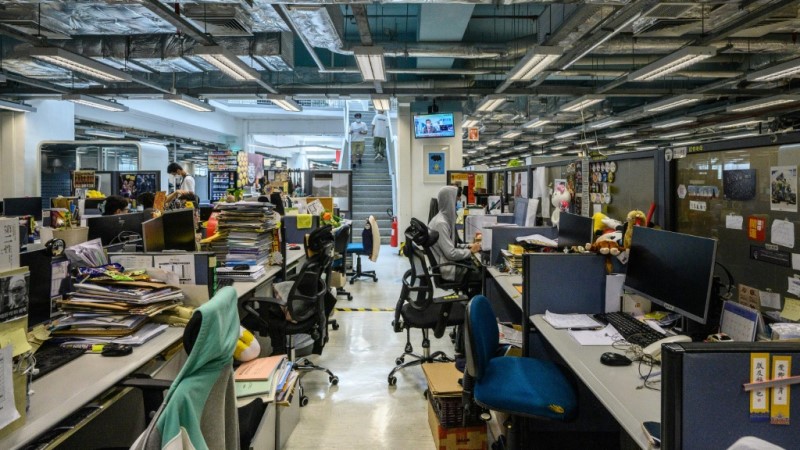 The newsroom of Apple Daily, which has been declared a threat to national security

It has now been declared a threat to national security and its future is deeply uncertain.

Caustic criticism of Beijing has been part of the paper’s DNA from the beginning.

It was founded in 1995 “as a newspaper for Hong Kong people” by Jimmy Lai, a billionaire mogul who had fled to the city from the mainland as a penniless child, and amassed a fortune selling clothes. 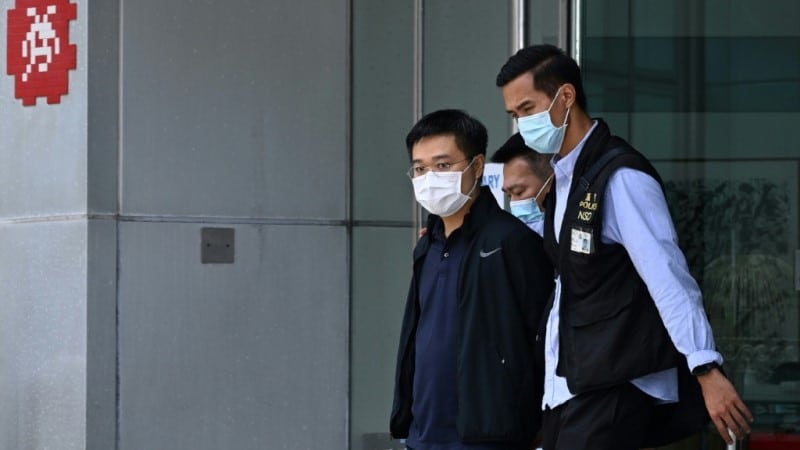 Five Apple Daily executives have been arrested, and some of its assets frozen

Lai had not been especially political until the events of June 4, 1989, when he and many other Hong Kongers watched in horror as China sent tanks and troops to crush democracy protesters in Beijing’s Tiananmen Square.

In the ensuing years he became increasingly outspoken — often using especially colourful language to describe China’s leaders — and his clothing brand Giordano soon found itself in trouble with mainland authorities.

So Lai sold up and ploughed the proceeds into a new endeavour — founding a media empire.

The emergence of Apple Daily coincided with Hong Kong’s return by Britain to China in 1997.

As many Hong Kongers fretted about their future freedoms, Apple Daily became the voice of the city’s pro-democracy, Beijing-sceptical wing.

Much like Rupert Murdoch before him, Lai carved a space out in a crowded media landscape by being brasher and louder than his rivals, combining often populist right-wing politics with ample lashings of sex, celebrity and scandal.

The tactics paid off. In just a few years Apple Daily was printing 400,000 copies a day. Lai also opened up a Taiwan edition.

Much like the rest of the print media, its circulation has crumbled in recent years — to around 80,000 daily copies in Hong Kong. 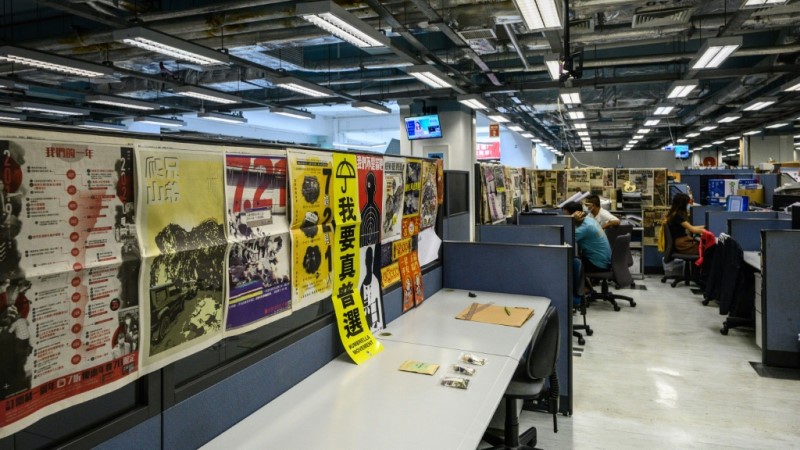 But it remained a voice of defiance as local media increasingly began to self-censor and avoid taking on China’s leaders directly.

As Hong Kong’s pro-democracy movement gathered steam from 2014 onwards, Lai became public enemy number one to Beijing, with state media routinely describing him as a “traitor” and a “black hand”.

Apple Daily’s support for the huge and often violent democracy protests that rocked Hong Kong in 2019 infuriated Beijing further, as did Lai campaigning for international sanctions.

Lai and Apple Daily’s editorials were also vocal in support of former US president Donald Trump’s confrontations with China. 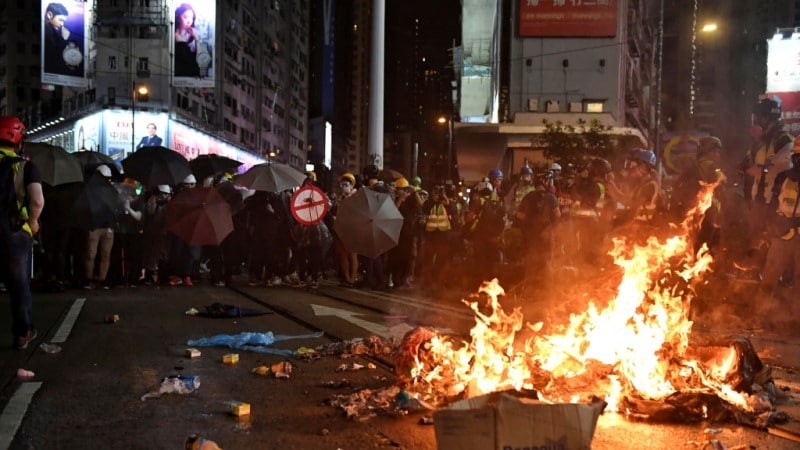 See You in Prison

Lai, 73, was among the first high-profile democracy activists arrested under the law.

He was jailed for attending protests, and faces a national security charge of collusion that could land him a life sentence.

In an interview with AFP almost exactly a year ago, shortly before the law came in, he predicted it would be used to silence his newspaper.

“Whatever we write, whatever we say, can be subversion, can be sedition,” he said. 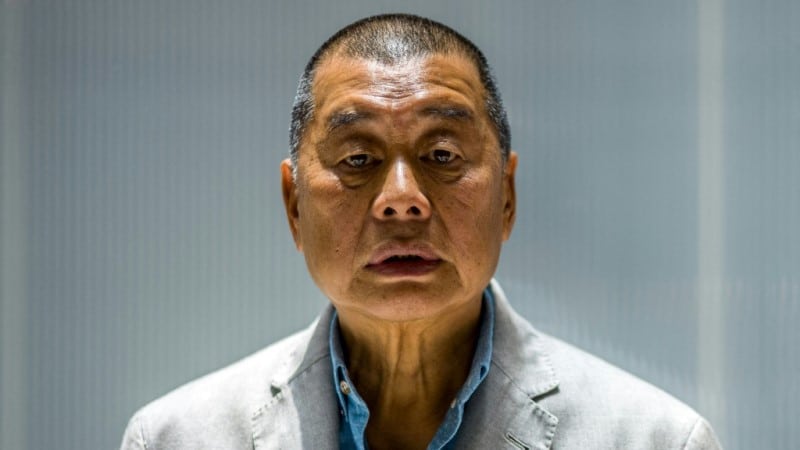 On Thursday, five Apple Daily executives were arrested under the same charge and some of its assets were frozen.

A large number of items including 38 computers used by reporters were seized by police, Apple Daily said.

“They took away my computer,” a reporter, who declined to be named, told AFP, adding that staff were rattled.

“No one knows where the red line is,” he said. “But for now I will continue my work as long as I can.” 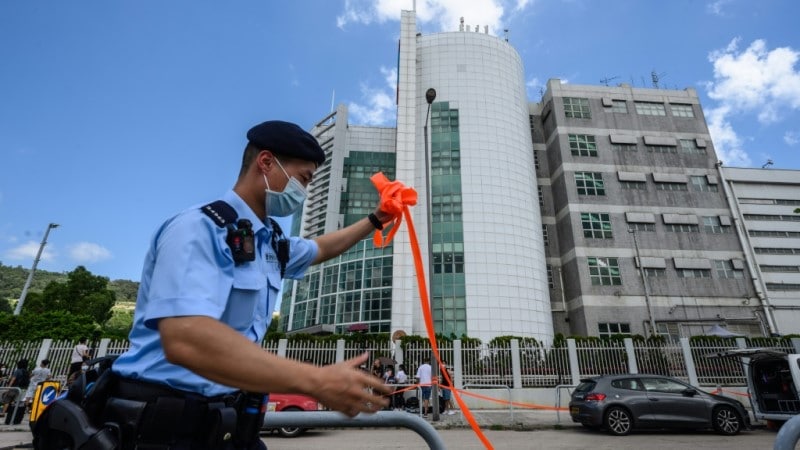 A features reporter, who gave her surname Chan, said gallows humour had descended over the newsroom in recent months.

“We often made dark jokes like ‘See you in prison'”, she told AFP.

But she too vowed to plough on.

“If they really ban us, then we will remain a witness to history and will keep writing until the end.”