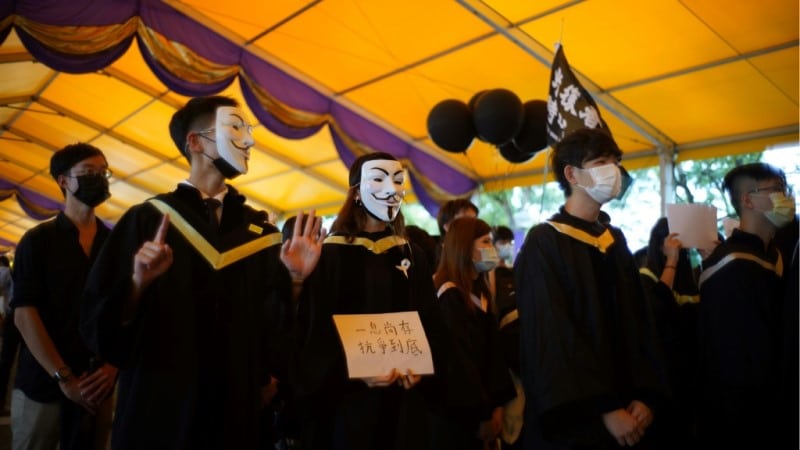 Dozens of graduating Hong Kong students displayed slogans on Thursday that authorities have declared illegal in a rare act of defiance against a sweeping new national security law imposed on the city by Beijing.

The law was unveiled in June and outlawed certain political views, such as advocating for independence or greater autonomy from Beijing.

It has all but wiped out the mass democracy protests that rocked the city last year and has left swathes of the population too scared to speak out.

Anti-coronavirus bans on more than four people gathering in public have also stifled protests and stopped official graduation ceremonies from being held.

But on Thursday small groups of students at the Chinese University of Hong Kong (CUHK) donned face masks and chanted protest slogans for an unofficial graduation day.

Among the slogans chanted and displayed were “Liberate Hong Kong. Revolution of our times” and “Hong Kong independent, the only way out.”

Both phrases were a common feature of last year’s rallies, but have since been declared illegal under the new national security law, which can carry up to life in prison.

The students also sang “Glory to Hong Kong”, a protest song that authorities have also outlawed.

In a statement, CUHK said graffiti was sprayed during the protest and reported to the police.

Police said they had launched a formal investigation into the “blatant violations of the national security law“.

CUHK’s campus saw brief clashes a year ago between police and protesters and was decked for months in slogans and graffiti that has since been wiped away.

A few days later, much more intense clashes broke out at Polytechnic University with police besieging hundreds of protesters, some of whom were armed with bow and arrows.

Students attending the rally said political oppression had increased over the last year but they felt determined to speak out despite the risks.

“My biggest graduation wish is the Chinese Communist Party will fall from power soon,” a 22-year-old student, who identified his surname as Wong, told AFP.

“To be honest, the movement is over now,” said another student, who gave only a first name, Amanda. “People will need to regather the power and come back again”.

Beijing says its security law has restored stability and hit out at western criticism that the move ends the freedoms and autonomy Hong Kong was guaranteed ahead of its 1997 handover from Britain.

While Thursday’s protest was small in number, it illustrates that many of the grievances which fuelled last year’s unrest remain unaddressed.