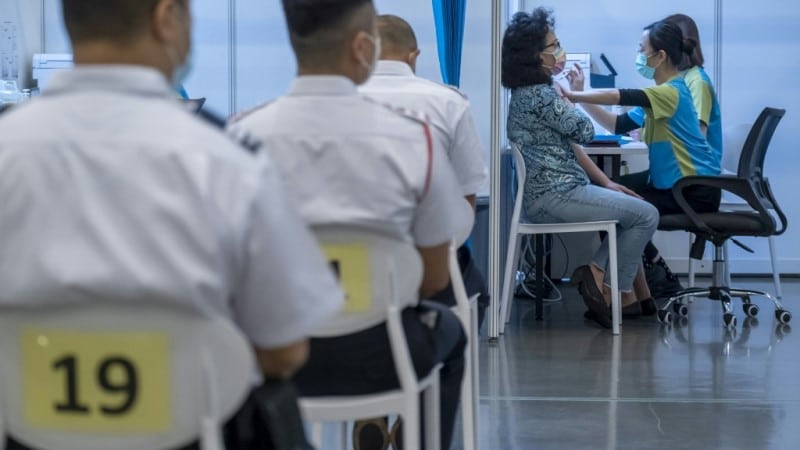 Hong Kong is currently offering two vaccines to its residents: one from China’s Sinovac, and the other from Pfizer-BioNTech

Hong Kong health authorities have ejected a private clinic from the city’s coronavirus vaccination program after it reportedly recommended the German-made Pfizer/BioNTech shot to patients over the one from China’s Sinovac.

The move illustrates the Hong Kong government’s sensitivity to any criticism of the Sinovac vaccine, which has a comparatively lower efficacy rate and was fast-tracked by regulators despite a lack of published data.

The city’s health department said Tuesday that the clinic would no longer administer Covid-19 jabs because a doctor violated an agreement with the inoculation programme.

Authorities said they had also reclaimed unused Sinovac doses from the clinic.

The announcement came after a photo of a notice at the clinic comparing the two vaccines’ efficacy rates went viral online over the weekend.

“Advice: don’t take Sinovac, take BioNTech,” the notice read, adding one of the clinic’s own doctors had chosen the latter.

Ta Kung Pao, a newspaper that answers to Beijing’s Liaison Office in Hong Kong, then ran a report accusing the doctor of “smearing” the Sinovac vaccine.

So far some 403,000 Hong Kongers — about five percent of the city’s population — have received their first doses.

More than 250,000 of them got the Sinovac jab, while the rest got Pfizer-BioNTech shots.

Separately on Wednesday, the government suspended the Pfizer shot due to a packaging problem, but stressed it did not believe there was a safety risk.

China’s coronavirus vaccine makers have been less forthcoming than their competitors in publishing peer-reviewed data from clinical trials — even as Beijing pushes those shots around the world as an alternative to Western-made shots.

The Sinovac shot was approved by Hong Kong after the company submitted data directly to regulators, not to a peer-reviewed medical journal.

Data on the jab from trials in other countries points to efficacy of between 50-80 percent, depending on the studies, compared with Pfizer/BioNTech’s 94-95 percent.

Hong Kong began its vaccination drive last month but the public take-up has been slow and ensnared by roiling distrust of China, fuelled by Beijing’s sweeping crackdown on the city’s democracy movement.

A recent poll said only 37 percent of adults planned to get vaccinated.

However, some of the city’s own leading epidemiologists have openly stated that the Pfizer/BioNtech vaccine is measurably more effective.