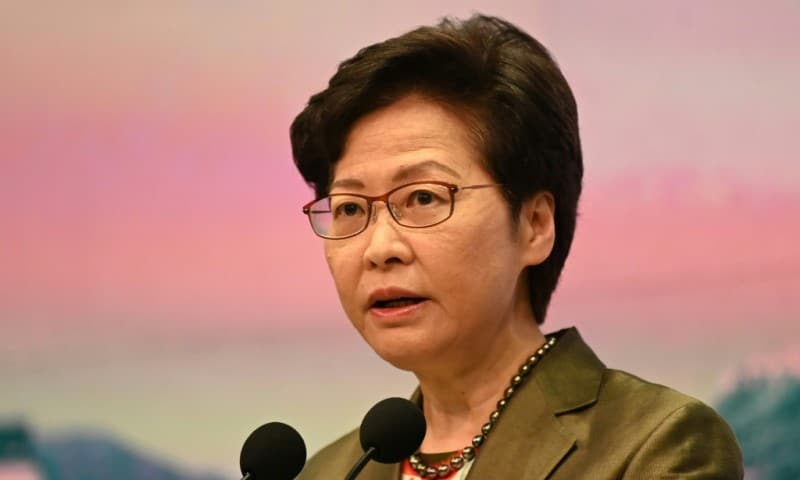 Hong Kong’s leader on Tuesday warned one of the city’s top legal bodies against getting involved in politics, in the latest sign of the government telling professional bodies to toe Beijing’s line.

Chief executive Carrie Lam’s comments towards the Law Society come as China remoulds Hong Kong in its own image and pursues civil society groups deemed to be politically disloyal or supportive of the city’s democracy movement.

“If the Law Society allows politics to hijack their legal profession, the government will… consider severing its relationship with it,” Lam told reporters, without spelling out what measures the government might take.

With over 12,000 members, the Law Society is the city’s largest association of solicitors and the only regulatory body of its type with statutory powers.

It can issue practicing certificates, investigate professional malpractice and establish rules of conduct for the industry.

Next week it will elect five of its 20 council members and pro-establishment figures are concerned more liberal, pro-democracy minded lawyers might win.

On Sunday the People’s Daily, the mouthpiece of China’s ruling Communist Party, published a commentary warning the Law Society not to elect any “anti-China elements” and choose “professionalism rather than politics”.

The Bar Association has been more outspoken than the Law Society about concerns that Hong Kong’s vaunted judicial independence is being undermined by China’s crackdown on dissent, including the imposition of a national security law that reshaped the city’s legal landscape.

“‘Politicized’ appears to be new govt code word for ‘non-pro-govt candidates winning a majority on the Law Society council’,” Antony Dapiran, a Hong Kong lawyer and author, wrote on Twitter.

China has cracked down on dissent and overseen a campaign to purge the city of people and groups deemed unpatriotic since huge and disruptive democracy protests convulsed Hong Kong two years ago.

Over 30 professional and political groups have disbanded in the past year, often after being singled out by Chinese state media and then investigated by authorities.

Both were prominent advocates for democracy over the years.

“Terminating and disbanding on their own is the only choice now left to those groups and individuals who used to wantonly touch upon the ‘red lines’,” Lam said Tuesday.