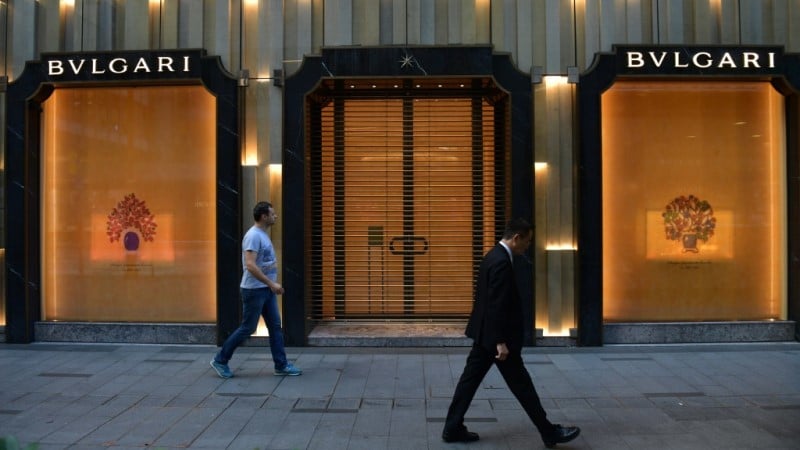 Semi-autonomous Hong Kong has no sales tax, but over in China, punitive taxes provide a powerful incentive for the smuggling of luxury goods

The massive seizure — valued at HK$120 million ($15.4 million) — is a window into the thriving smuggling networks that operate along the border between Hong Kong and China.

Semi-autonomous Hong Kong has no sales tax, making it one of the cheapest places in the world to buy luxury goods.

But over in China, punitive taxes often mean that luxury items cost up to double the price, providing a powerful smuggling incentive.

A vast cornucopia of items get trafficked over from Hong Kong.

Two bizarre recent operations that were disrupted included frozen meat and pets, some of whom were thrown overboard by smugglers and drowned when police gave chase.

On Thursday, the Customs and Excise Department unveiled the city’s largest bust to date of a cross-border smuggling operation that used speedboats.

Mark Woo, head of Customs’ syndicate crimes investigation bureau, said officers had been monitoring a smuggling gang for weeks before they moved on a speedboat as it was being filled up last Wednesday.

Subsequent raids at three warehouses uncovered a treasure trove of luxury items of the type that are devoured by China’s moneyed elites.

“The syndicates carried out very sophisticated counter-surveillance activity on our officers,” Woo told reporters, describing how the gang used drones to monitor for police and deployed decoy speedboats in the waters between Hong Kong and the neighboring mainland city of Shenzhen.

The raids netted 66,000 luxury goods and cosmetics, 400 endangered plants from Africa and America that are valued in traditional Chinese medicine and 2.3 tonnes of high-value foods that included items like shark fin, sea cucumbers and bird nests.

While cross border smuggling has been a persistent problem, officials say it has exploded during the pandemic because Hong Kong has been all but shut off from the mainland.

That means mainlanders who might travel to Hong Kong for a luxury goods splurge can no longer come.

“In the past, lots of these luxury goods were delivered from Hong Kong to mainland China by tourists or passengers, but they cannot do it under the pandemic,” assistant commissioner Chan Tsz-tat told reporters.

“Smuggling rings have no other means but to resort to smuggling by sea mode.”