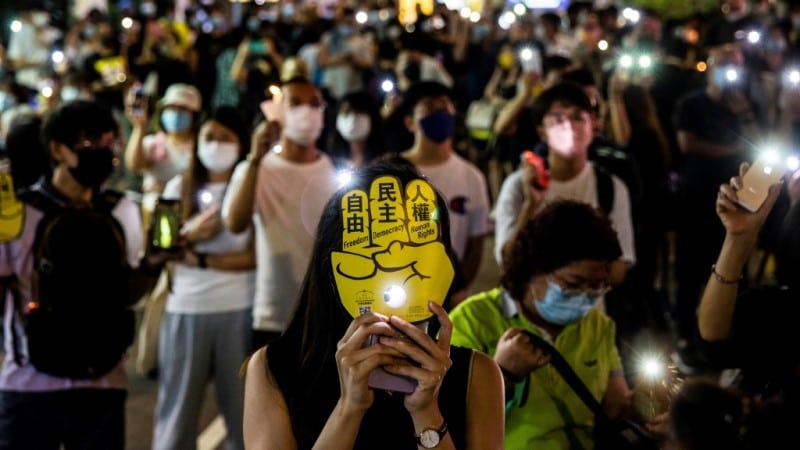 As the clock struck 8pm in Hong Kong’s shopping district of Mong Kok, dozens of people simultaneously turned their mobile phone lights on, a small gesture of defiance in a city where mass remembrance of Beijing’s Tiananmen crackdown has been banned.

It was a scene repeated in multiple districts across the city.

For the last 32 years, crowds of Hong Kongers, often tens of thousands strong, have come together each June 4 in the city’s Victoria Park to hold a candlelight vigil for those killed in 1989 when tanks and troops crushed pro-democracy protesters in China’s capital. 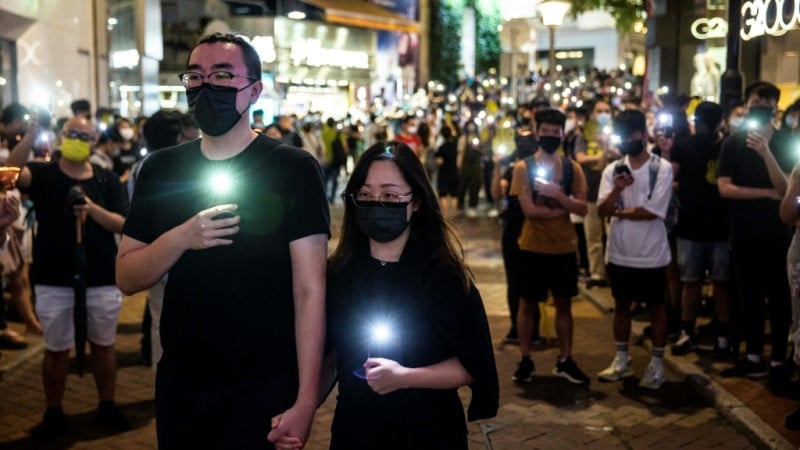 This year, amid a widespread crackdown on dissent, police cordoned off the park, citing the coronavirus.

But flashes of defiance could still be seen, from graffiti appearing on walkways and bridges, to people shining lights and candles where they stood or resurrecting popular protest chants as they walked.

One of those holding a candle in Mong Kok on Friday night was a man standing in silence outside a shopping mall.

He gave his surname as Pun.

“I’m not here to participate in an assembly, I’m here waiting for someone,” he told AFP with a deadpan face.

Shortly before, a 69-year-old woman, who gave her surname as Yuen, was handing candles out to those passing by.

“There is more than one way to commemorate June 4,” she said. “I believe there is no way they can make people completely forget.”

A young woman, who gave her surname as Chan, was one of dozens of people stopped and searched by police throughout the evening.

“I’m out here because I want to continue the tradition of commemoration. Other than mourning for the dead on June 4, we also need to mourn Hong Kong’s lost freedoms,” she said. 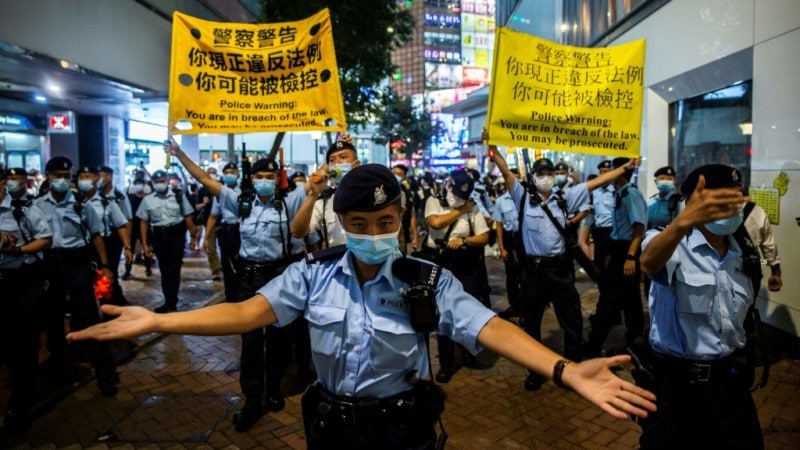 Another man, surnamed Ng, cut a surreal figure. He was walking around the district with a bag containing bananas and two mobile phones with their lights on.

“Being creative is our only way,” he remarked.

Elvis Chan, the 33-year-old owner of a restaurant selling desserts, said he planned to play “historical clips and documentaries about June 4” on television screens.

“We hope citizens can be aware of the history. We won’t forget and won’t give up,” he told AFP. 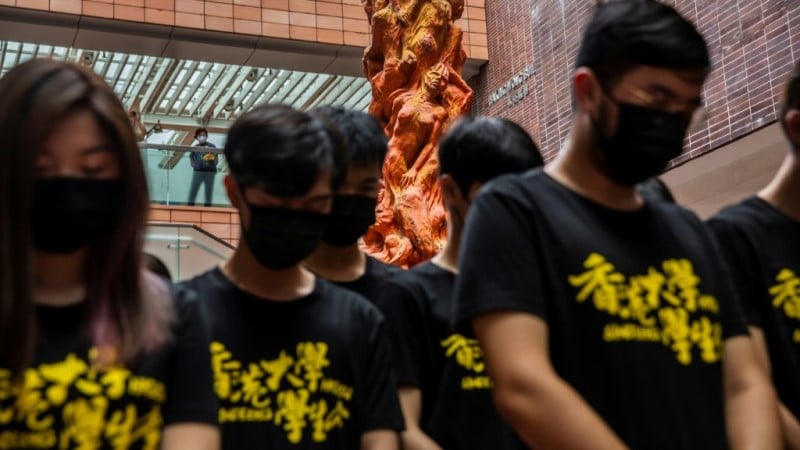 University of Hong Kong students observe a moment of silence before cleaning the ‘Pillar of Shame’, a monument that commemorates the victims of the 1989 Tiananmen Square crackdown

Another restaurant owner, who gave her first name as Carrie, said she would light candles and play traditional protests songs.

“The government banned the event at Victoria Park, but they can’t stop people mourning the deaths in our own way,” the 31-year-old said. “By doing that, I am not violating any law.”

On the campus of the University of Hong Kong on Friday afternoon, students washed a sculpture known as the “Pillar of Shame”, another June 4-linked ritual that has not yet been shut down by authorities.

The statue depicts 50 bodies enmeshed together, their faces contorted in pain, as a way to symbolise those who died in the Tiananmen crackdown.

Alberto, a 25-year-old art student, was among those laying flowers at the site.

He described the vigil ban as “a form of political suppression that aims at silencing dissent as well as trying to wash off our memories of the Tiananmen massacre”.

But Hong Kongers, he said, would find ways to keep memories alive, such as the pillar washing ritual.

“I feel it has become even more important to do whatever we can within the already tightened scope,” he said, declining to give his surname.

Isaac, an 18-year science student, said the pillar was a way “to memorize and preserve history… it is an attempt to prevent the historical denialism of the Chinese Communist Party”.

But he added he was unsure whether there will come a time when students might not be able to perform the ceremony.