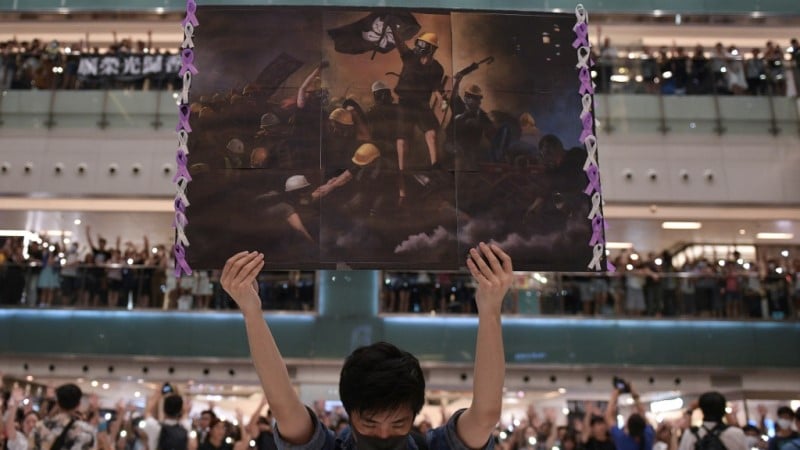 One of the pictures in the exhibition was by AFP photographer Nicolas Asfouri and was taken on September 11, 2019

The exhibition has been hosted by the Association Casa de Portugal Macao every year since 2008 and was scheduled to run from late September until October 18.

The exhibition showcased “the best visual journalism” of the past year and included prize-winning images of the Hong Kong protests captured by AFP photographer Nicolas Asfouri.

The World Press Photo Foundation said in a statement that they “regret” the premature closure and “haven’t been able to confirm the reasons” for it.

“While the reasons for the closing remain unclear, we are following local media reports suggesting that it might be the result of external pressure on the content of the exhibition,” said Laurens Korteweg, director of Exhibitions at the World Press Photo Foundation.

“Supporting the conditions for freedom of expression, freedom of enquiry, freedom of the press is a fundamental part of our work,” he added.

The exhibition featured photographs from the massive pro-democracy protests that brought Hong Kong to a standstill for months last year.

Macau’s English and Portuguese Speaking Press Association told local media that the city is “facing something serious and a worrying episode that signals an erosion of the space for freedom and expression”, if the closure was due to political pressure.

In May, the gambling enclave banned a photo exhibition of the deadly Tiananmen Square crackdown on pro-democracy activists for the first time in three decades.

Both Macau and nearby Hong Kong are former colonies that were granted certain freedoms unseen in the Chinese mainland when they returned to communist China’s rule.

But many fear such rights are disappearing under Beijing’s tightening grip.

After last year’s huge and often violent democracy protests, Beijing launched a crackdown on its critics in Hong Kong.

In late June, it also imposed a broadly worded security law that outlawed certain views and ushered in a new political chill.