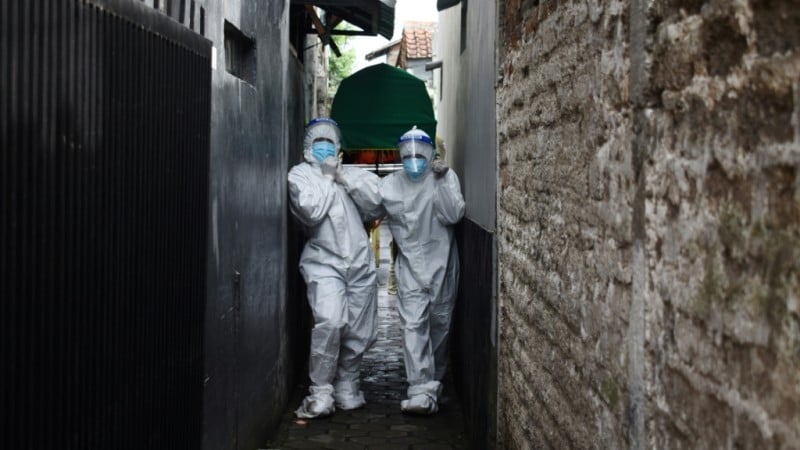 Indonesians have ignored health warnings to stock up on a “miracle cure” for Covid-19 backed by leading politicians and social media influencers, as an out-of-control virus surge sweeps the country.

Authorities are reporting hundreds of deaths every day as the world’s fourth-most populous nation struggles with its worst outbreak since the pandemic began.

Pharmacies across the country are running out of ivermectin, an oral treatment normally used to treat lice and other parasitic infections, thanks in part to viral social media posts touting its potential as a coronavirus treatment.

“Those who come bring a screenshot showing that ivermectin… could cure Covid,” said Yoyon, head of a pharmaceutical sales group at a market in the capital Jakarta, who like many Indonesians goes by one name.

“We are out of supplies at the moment after many people came to buy it,” he added.

“Ivermectin is one of the safe and effective keys to ending the pandemic from various doctors, with lots of scientific evidence,” Reza Gunawan, a self-described “holistic health practitioner”, wrote to his 350,000 Twitter followers.

Iman Sjafei, the cofounder of popular Indonesian media outlet Asumsi, used the same platform to say five of his acquaintances had recovered from Covid after taking the drug.

“Maybe placebo. Maybe. But it might be true too,” he added.

“Many people are saying that it can cure Covid-19 so I bought it,” the 66-year-old said, while conceding some had raised concerns about unspecified side effects.

Fuelled by anti-vaccine and pandemic conspiracy theories online, there has been a surge in demand for the drug from Brazil to South Africa to Lebanon.

But manufacturer Merck has said there was “no scientific basis for a potential therapeutic effect against Covid-19” and warned of possible safety issues if the drug is administered inappropriately.

Scientists, the World Health Organization, and several drug regulators — including Indonesia’s own — have also stressed there is a lack of credible evidence to show it works against Covid-19.

That has not stopped Indonesian tycoon and government minister Erick Thohir from praising ivermectin and urging domestic production to fight the current outbreak.

A former owner of Italian football champions Inter Milan and a shareholder of the Philadelphia 76ers basketball franchise, Thohir recently suggested that state-owned drug giant Indofarma could produce up to four million ivermectin tablets a month.

While he said more testing is required to ascertain its effectiveness against Covid-19 and urged users to get a prescription before taking the tablets, others have shown less caution.

“I’m not a doctor, but in the midst of desperation and difficulty, I think anything is worth a try,” said Susi Pudjiastuti, a popular former fisheries minister, who has 2.5 million followers on Twitter.

Facebook posts and articles touting the drug’s effectiveness against coronavirus have proliferated in several countries.

Efforts to tackle the virus worldwide have been marred by conspiracy theories, often propagated by political leaders and other public figures.

In the Philippines, President Rodrigo Duterte has pressured regulators to approve the drug as a Covid treatment.

“There are a lot of credible people… who swear by their fathers’ grave that ivermectin is doing good to their bodies while they are suffering from Covid,” Duterte recently told the chief of the country’s drug regulator.

After demand for the drug surged in Latin America, the WHO said in March that any use of the drug as a coronavirus treatment should be limited to clinical trials.

The US Food and Drug Administration has even warned of the risks of taking ivermectin following reports of people being hospitalized after ingesting a version of the drug meant for horses.