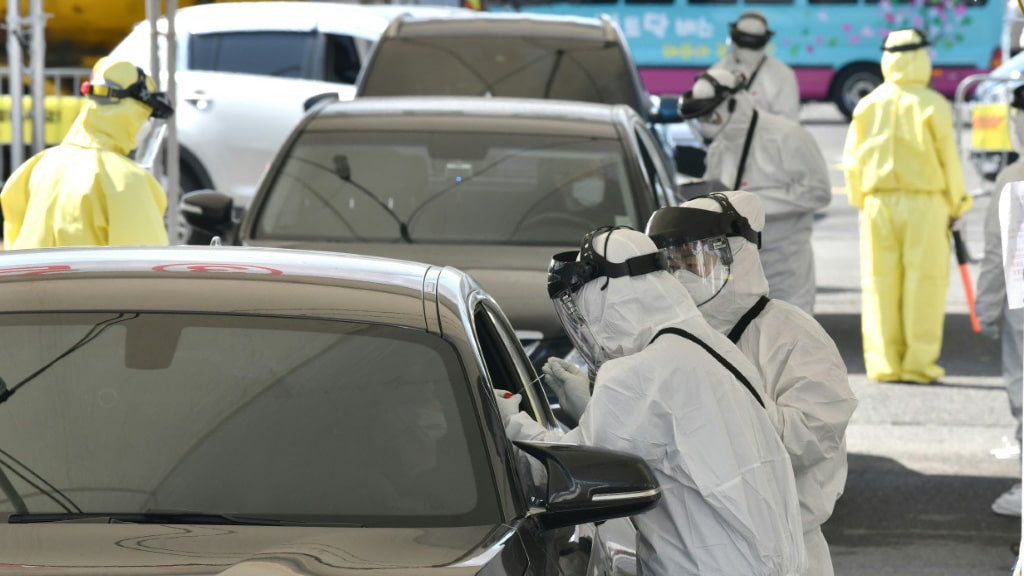 In South Korea, detailed information on patients infected with the coronavirus is available online, sometimes making it possible to identify individuals

South Korea has confirmed more than 7,500 infections, one of the the largest totals outside China, where the virus first emerged, although new case numbers have been declining for several days.

Officials say that has been made possible by widespread testing of potential contacts — the South has carried out more than 210,000.

Across the country, local authorities have been issuing emergency alerts by mobile phone to those living or working in districts where new cases have been confirmed.

The text message arrives with a shrieking warning, announcing nearby locations visited by patients before they were diagnosed with the virus and their links to other cases.

More information is available on municipal websites, sometimes with breakdowns of individuals’ daily schedules, even down to the minute, and details of their residence and employer — often making them identifiable individually.

In a country where virtually everyone owns a smartphone, doxxing — maliciously spreading private information about individuals and businesses online — has long been a problem.

And the consequences have been sometimes been embarrassing, even brutal, with the National Human Rights Commission describing them as “human rights violations”.

“We can’t help but worry about the situation where the confirmed patients become subject to secondary damages, such as being criticized, ridiculed and abhorred online,” it said in a statement.

Two confirmed patients have been accused of having an extra-marital affair, after their travel logs showed similarities. 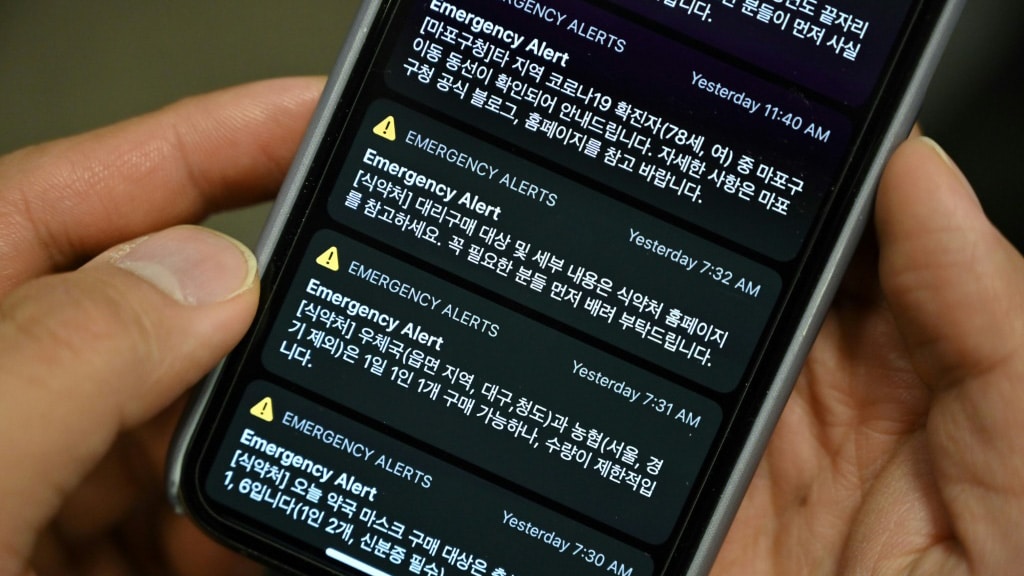 Text messages arrive with a shrieking warning, announcing nearby locations visited by patients before they were diagnosed with the virus and their links to other cases

One Samsung Electronics employee who tested positive said she received hateful comments online after a city mayor revealed her boyfriend is a member of Shincheonji, the controversial religious sect linked to more than half the South’s cases.

“I am having a hard time mentally, more so than (physical) pain,” she wrote on her Facebook account, which she has since turned private, asking other users not to share her personal information.

“I’m so sorry to my family and friends,” she added.

Michael Hurt, a sociologist at Korea National University of Arts, said that while the alerts reassure the public that authorities are dealing with the epidemic, they can unintentionally lead to “the stigmatization of areas as infected or ‘dangerous’.”

Companies identified as visited by infected people have been hit.

“I’m having a very hard time, we are basically getting no customers after an emergency alert went out which included our address,” a restaurant owner in Seoul told AFP.

“I understand these alerts are necessary, but at the same time, my business has been virtually destroyed.”

South Korea has an advanced medical system, a free press and a strong culture of public accountability, and Seoul’s foreign minister says the government has stressed transparency when tackling the public health crisis.

But even a health ministry civil servant could not avoid online bullying after contracting the virus.

The municipal government of Sejong — where the ministry is based — revealed that she took gym classes taught by an infected instructor, as well as a detailed breakdown of her daily schedule.

Most online comments slammed her as “irresponsible” for going to a gym during the outbreak, but others picked on items such as her lunch hours, saying they were too long for a civil servant and accused her of “slacking off”.

The government’s Central Disaster and Safety Countermeasure Headquarters was forced to step in to defend her, saying her gym visits took place before authorities advised people to avoid public gatherings and adopt social distancing.

“Excessive attacks and indiscriminate accusations against those infected will not only greatly hurt the individual, but will also impede prevention activities,” it said.

A Seoul National University study has since shown South Koreans were more afraid of being “criticized” should they get infected, than the virus itself.

There was a “delicate balance” between risk, information and privacy, said Jason Farley, a nurse practitioner and professor at the Johns Hopkins University School of Nursing.

Simpler releases listing an infected person’s locations between certain dates would be sufficient, he told AFP, but the details being made public were leading to “significant stigma, discrimination and, in some cases, threats to individuals known to have COVID-19.

“This behavior is unacceptable and should be discouraged.”