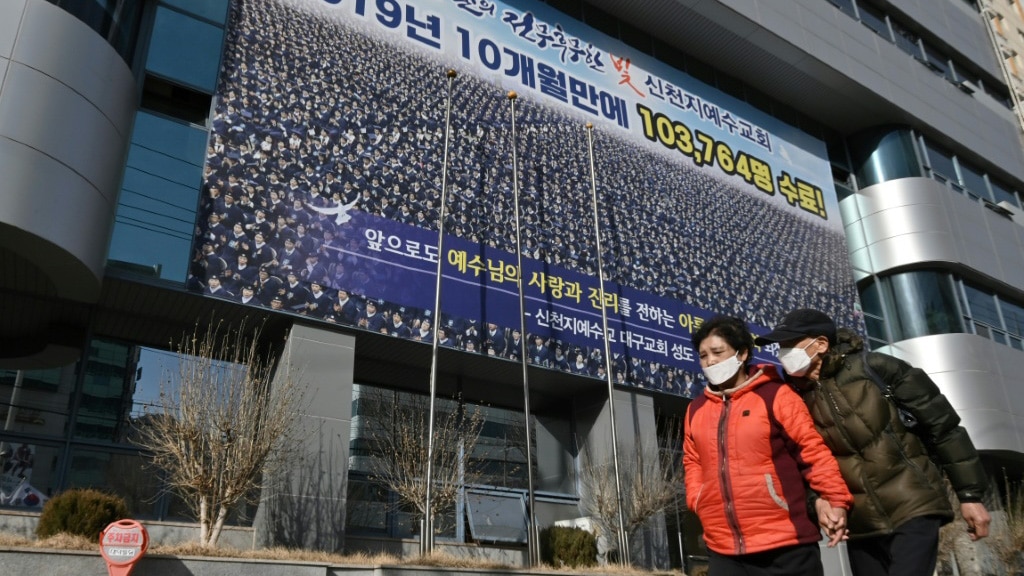 Shincheonji — a secretive religious group in South Korea — proclaims its founder has donned the mantle of Jesus Christ and will take 144,000 people with him to heaven on the day of judgement

More than half of the country’s nearly 1,600 infections are linked to Shincheonji followers.

Shincheonji — in full the Shincheonji Church of Jesus, the Temple of the Tabernacle of the Testimony — was founded in 1984 by Lee Man-hee, now 88.

Often condemned as a cult, it describes itself on its website as “the one and only kingdom and temple of God on this earth”, pledging to yield to the will of Jesus “by sacrificing our bodies like a candle”.

Shincheonji proclaims Lee has donned the mantle of Jesus Christ and will take 144,000 people with him to heaven on the day of judgment.

But with more church members than available places in heaven, they are said to have to compete for slots and pursue converts.

It seeks recruits surreptitiously by dispatching its members to mainstream Protestant congregations to try to persuade their believers — a tactic that has prompted many churches to issue warnings to keep them at bay.

At their own services Shincheonji members are forbidden to wear glasses, necklaces and earrings.

They sit close together on the floor without chairs and desks, praying extensively in what critics say creates an ideal environment to spread viral infections.

The outbreak among its followers began with Patient 31, a 61-year-old female member.

She developed a fever on February 10, but attended at least four church services in Daegu — the country’s fourth-largest city and the epicenter of the outbreak — before being diagnosed.

After days of mounting public anger, Shincheonji has handed over a list of 212,000 members to authorities to enable them to be checked for coronavirus symptoms.

But reports say it has previously boasted of more than 240,000 members, raising doubts over the accuracy of the roster.

Shincheonji has 12 branches in South Korea that it calls “the 12 Tribes”, each named after one of Jesus’ disciples.

It says on its website it has mission centers in 15 countries around the world, including China and the United States, and that hundreds of pastors have renounced their ordinations to join it.

Shincheonji has been so successful that it has been able to mobilize thousands of followers to hold mass displays at high-profile venues — such as Seoul‘s Jamsil Olympic Stadium in 2012, home to the 1988 Games.

Hundreds of performers enacted biblical scenes and motifs on the pitch, while — just like North Korea‘s Mass Games — thousands turned the colored pages of books in sequence, creating an ever-changing backdrop of giant images rippling across one side of the stadium.