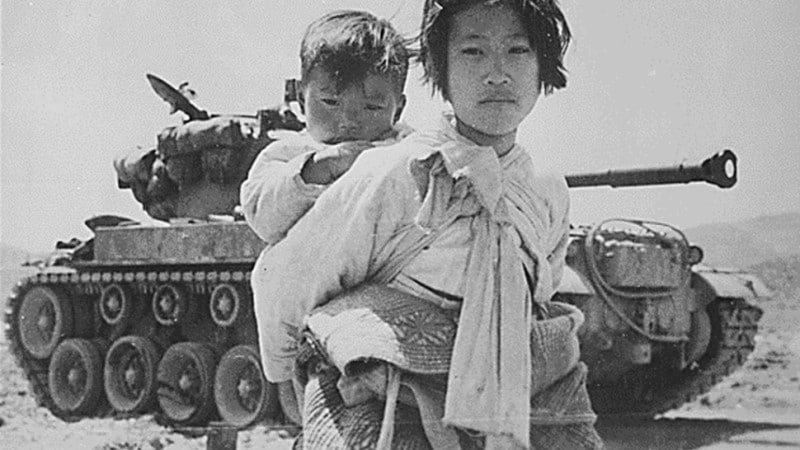 A young girl with her brother on her back walks past a stalled M-26 tank at Haengju, Korea in June 1951

North and South Korea on Thursday separately marked the 70th anniversary of the start of the Korean War, a conflict that killed millions of people and has technically yet to end.

Communist North Korea invaded the US-backed South on June 25, 1950, as it sought to reunify by force the peninsula Moscow and Washington had divided at the end of the Second World War.

The fighting ended with an armistice that was never replaced by a peace treaty, leaving the peninsula and millions of families split by the Demilitarized Zone.

“The Korean War is the war that has made us what we are today,” said South Korean President Moon Jae-in at a ceremony Thursday evening.

“We long for peace. However, if anyone threatens our people’s safety and lives, we will firmly respond,” he said, noting the two Koreas’ competition for dominance “ended a long time ago” with South Korea’s economy “more than 50 times” larger than the North’s.

Nearly 150 soldiers repatriated from Hawaii after being excavated in the North were formally received at the ceremony.

Video messages from the leaders of the 22 foreign nations that made up the UN coalition defending the South were played.

Up to three million Koreans died in the conflict, the vast majority of them civilians. 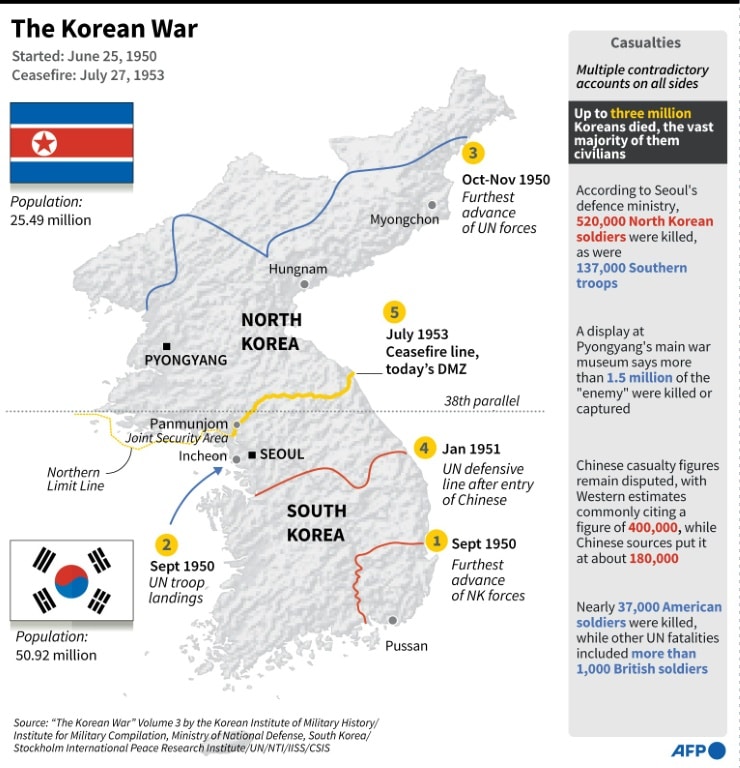 Cede Not an Inch of Ground!

The North has a different history of the period, which it knows as the Victorious Fatherland Liberation War, and insists that it was assaulted first, before it counter-attacked.

In Pyongyang, citizens and soldiers attended a war heroes’ cemetery on the outskirts of Pyongyang to lay flowers before the graves and bow.

“Cede not an inch of ground!” read an inscription on a statue of a machine gunner.

The official Rodong Sinmun newspaper carried more than 10 stories on the war, including an editorial asserting that a US invasion had turned “the entire country into ashes” but that it had forced the “aggressors” to sign a “surrender document”. 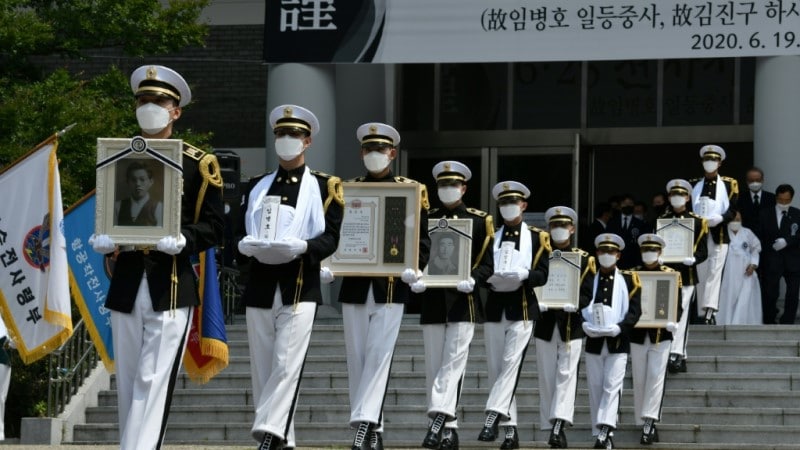 “A ceasefire is not peace,” it said. “The enemy is aiming for the moment that we forget about June 25 and lower our guard.”

The nuclear-armed North, which is subject to multiple international sanctions over its banned weapons programs, says it needs its arsenal to deter a US invasion.

Negotiations between Pyongyang and Washington have been deadlocked for months, leaving inter-Korean relations in a deep freeze despite a rapid rapprochement in 2018 that brought three summits between North Korean leader Kim Jong Un and the South’s President Moon Jae-in. 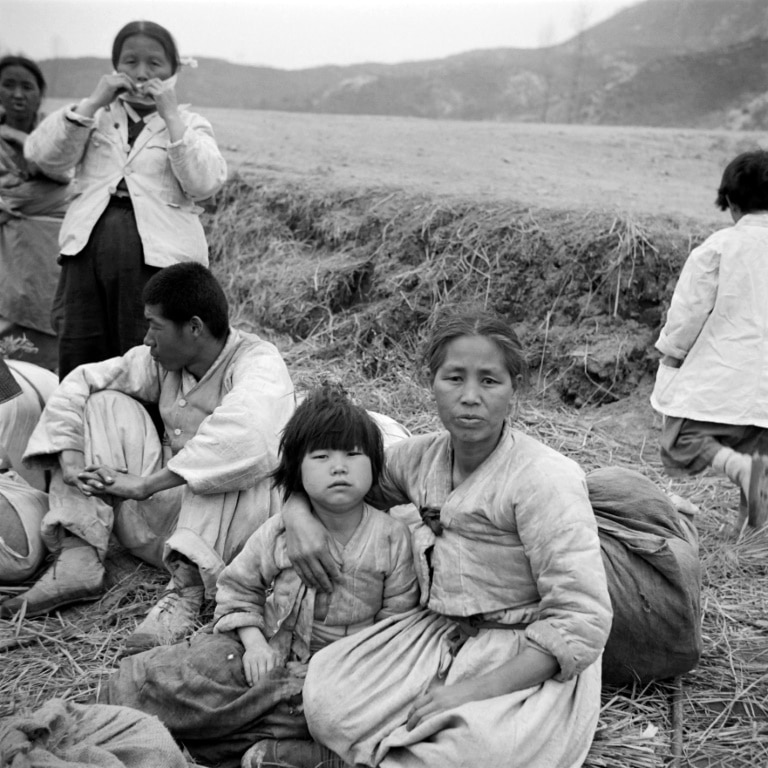 At the site of one of the key battlefields in Cheorwon county near the Demilitarized Zone a handful of surviving South Korean war veterans marked the anniversary.

“It is our misfortune that the South and North had to live for nearly 70 years in confrontation because of the war,” a veteran said, before releasing white doves as a symbol of their hopes for a final peace settlement.

Most South Koreans prefer “peaceful coexistence” with the nuclear-armed North to unification, a survey by Seoul’s Korea Institute for National Unification showed Thursday. 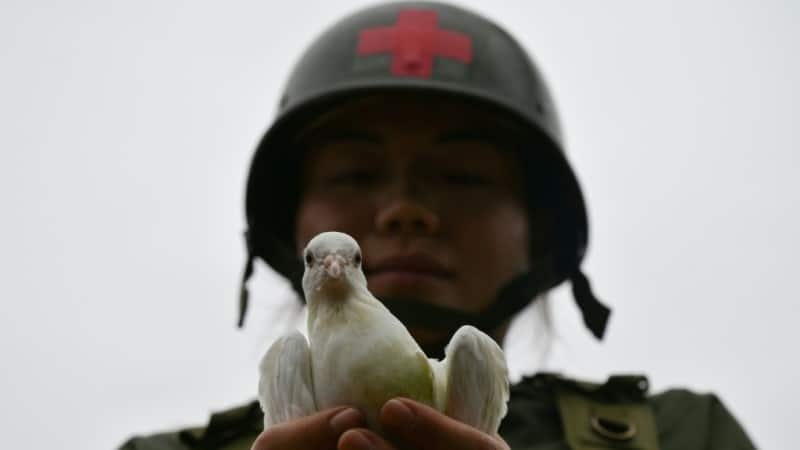 An actor dressed as a Korean War-era soldier holds a dove during a ceremony marking the 70th anniversary of the start of the fighting, in Cheorwon, near the Demilitarized Zone

Only 26.3 percent of respondents favored unification, while 54.9 percent preferred peaceful co-existence with the North.

Kim on Wednesday suspended plans for military moves aimed at the South, after the North raised tensions last week by demolishing a liaison office on its side of the border that symbolized inter-Korean cooperation.

Seoul’s relationship with Washington has also been strained by the Trump administration’s demands that it pay more towards the cost of keeping 28,500 US troops on the peninsula to protect the South from its neighbor.