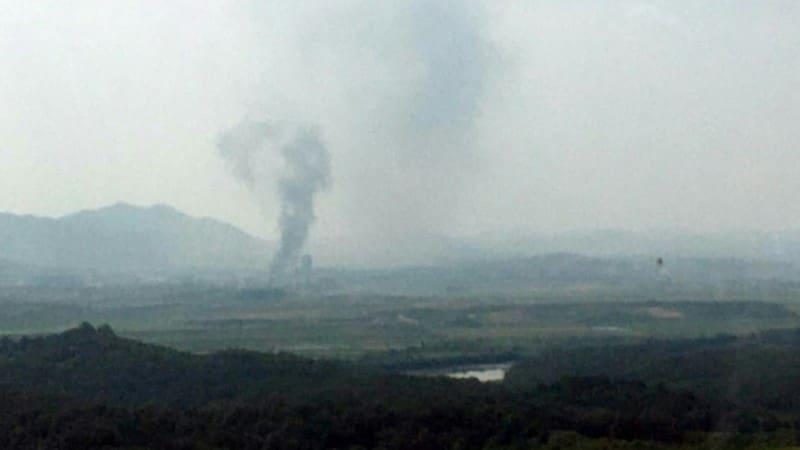 The demolition came after Kim Yo Jong — the powerful sister of North Korean leader Kim Jong Un — said at the weekend the “useless north-south joint liaison office” would soon be seen “completely collapsed”.

Footage of the explosion released by Seoul’s presidential Blue House showed a blast rolling across several buildings just across the border in Kaesong, with a nearby tower partially collapsing as clouds of smoke rose into the sky.

Analysts say Pyongyang may be seeking to manufacture a crisis to increase pressure on Seoul while nuclear negotiations with Washington are at a standstill.

After an emergency meeting, the National Security Council said it would “react strongly” if Pyongyang “continues to take steps that aggravate the situation”.

“All responsibility for repercussions stemming from this action falls squarely on the North,” it added.

The US, European Union and Russia all called for restraint.

A State Department spokesperson said Washington urges the North to “refrain from further counterproductive actions”, while the Kremlin called the escalation a “concern’ and said it would be monitoring closely.

The liaison office — in a dormant industrial zone where Southern companies once employed Northern workers — was opened in September 2018, days before the South’s President Moon Jae-in flew to Pyongyang for his third summit with Kim.

Around 20 officials from each side were stationed at the office during subsequent months. 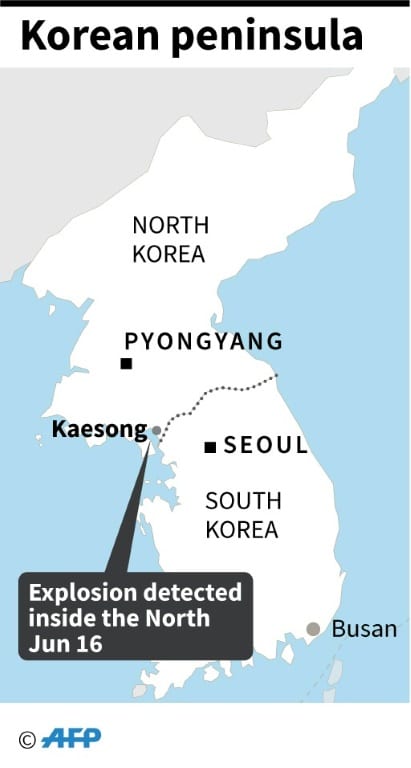 Map showing Kaesong industrial complext inside North Korea near the border with the South where an explosion was heard on Tuesday.

But inter-Korean relations soured following the collapse of the Hanoi summit between Kim and US President Donald Trump in February last year over sanctions relief and what the North would be willing to give up in return.

Operations at the office were suspended in January because of the coronavirus pandemic.

And since early June, North Korea has issued a series of vitriolic condemnations of the South over activists sending anti-Pyongyang leaflets over the border — something defectors do on a regular basis.

Pyongyang’s official Korean Central News Agency said Tuesday the liaison office’s destruction was in line with “the mindset of the enraged people to surely force human scum and those who have sheltered the scum to pay dearly for their crimes”.

Last week Pyongyang announced it was severing all official communication links with Seoul.

“North Korea has started a provocation cycle with stages of escalation,” said Leif-Eric Easley, a professor at Ewha University in Seoul, calling the destruction of the office “a symbolic blow to inter-Korean reconciliation and cooperation”.

“The Kim regime is also signalling the United States won’t have the luxury of keeping North Korea on the back-burner for the remainder of the year,” he added. 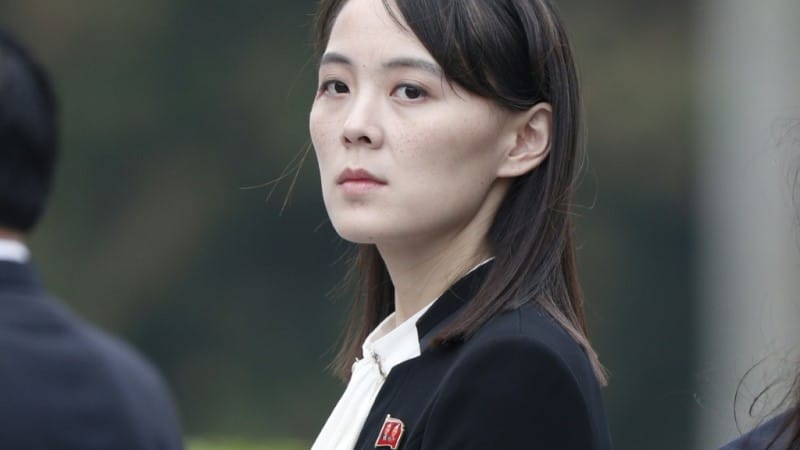 Kim Yo Jong, sister of North Korea’s leader Kim Jong Un, warned that the liaison office would be destroyed

Since Pyongyang condemned the leaflet launches — usually attached to hot air balloons or floated in bottles — the Unification ministry has filed a police complaint against two defector groups and warned of a “thorough crackdown” against activists.

On Monday, the left-leaning Moon urged the North not to “close the window of dialogue”.

The two Koreas remain technically at war after Korean War hostilities ended with an armistice in 1953 that was never replaced with a peace treaty.

Last week the North criticized Trump in a stinging denunciation of the US on the second anniversary of the Singapore summit, with its foreign minister Ri Son Gwon accusing Washington of seeking regime change.

US diplomats insist that they believe Kim promised in Singapore to give up his nuclear arsenal, something Pyongyang has taken no steps to do.

The North is under multiple international sanctions over its banned weapons programs.

It believes it deserves to be rewarded for its moratorium on nuclear and intercontinental ballistic missile tests and the disabling of its atomic test site, along with the return of jailed US citizens and remains of soldiers killed in the Korean War.

“Nothing is more hypocritical than an empty promise,” Ri said in his statement, carried by the official KCNA news agency.

Cheong Seong-chang, director of the Sejong Institute’s Center for North Korean Studies, said: “North Korea is frustrated that the South has failed to offer an alternative plan to revive the US-North talks, let alone create a right atmosphere for the revival.

“It has concluded the South has failed as a mediator in the process.”